The impact of Brexit on low-income households

As the two main party leaders try to agree a joint deal on Brexit, this blog uses official forecasts to look at what impact Brexit is likely to have on low-income households.

A second extension to Article 50 secured by the Prime Minister set the UK’s departure date from the EU to 31 October 2019, or sooner if the Houses of Parliament can ratify a withdrawal agreement in time. If not, there is a risk of a no deal Brexit. The government’s own forecasts project some substantial increases in prices as a result of Brexit which will affect the financial resilience of families, a question we have been asked to look at by a number of concerned councils.

Policy in Practice has modelled the financial resilience of over 700,000 households currently in receipt of housing benefit or council tax support. To carry out this analysis we adapted our policy engine using projections from the Bank of England, the Treasury and Oliver Wyman.

Alongside expected changes to rent and income, we modelled the increase in inflation (shown in the Consumer Price Index column in the table below) and other impacts on household costs (e.g. the impact of tariffs, or non tariff barriers), in the event of four scenarios:

Remain describes the current situation. The Chequers proposal lays out the relationship that the Prime Minister hopes to have with the EU after leaving the Union. It was developed in Summer 2018 and a subsequent white paper detailing the proposal was released shortly after. The Bank of England made its projections for the Chequers proposal alongside two no deal scenarios, a ‘disruptive’ and ‘disorderly’ Brexit, with the latter having a greater impact on the UK economy.

The drivers of higher living costs stem from:

Worryingly, if the UK leaves without a deal then a disorderly Brexit is more likely. This is partly because we have no guarantee that the majority of the trade deals we currently have through the EU will continue beyond withdrawal.

By applying OBR forecasts and the expected changes to inflation and household costs in the four scenarios, we obtain the following breakdown of the financial groups as of April 2021: 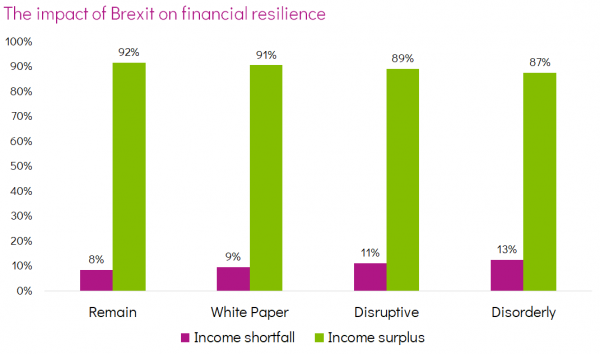 While most households will still be able to cover their costs, the number that do not could rise by 5%

As we can see the vast majority of households remain in the income surplus cohort under all four models, however in comparison to Remain:

Households will be worse off by at least £25.60 per month due to Brexit

While we have seen that most households will continue to cover their costs, if we look deeper we can see that their ability to do so will be reduced after any form of Brexit. Again, compared to the Remain scenario:

No deal will reduce wages and increase unemployment

By pairing our analysis with Bank of England figures, we have seen that all planned Brexit deals will reduce the financial resilience of vulnerable households.

There could be many more macroeconomic changes associated with Brexit that would hit the finances of low-income households across the country that are not picked up in our analysis. For example, government forecasts indicate that real wages will most likely fall under any of the leave scenarios, with a 10% fall under a no deal. Additionally, the Bank of England has suggested that unemployment may rise from a 40 year low of 4.0% today up to 7.3% by April 2021.

A change of this nature would see a sharp rise in Universal Credit claims, for two reasons.

There is likely to be a surge in new claims due to the rise in unemployment and secondly, people who are currently in receipt of legacy benefits will, as part of natural migration, move onto Universal Credit due to the change in their circumstances. In this scenario it is very likely that the number of claimants who transition via natural migration this year will exceed Amber Rudd’s January expectation of 1.6 million.

Poverty levels could rise significantly due to Brexit

Joseph Rowntree Foundation’s report How could Brexit affect poverty in the UK? used modelling from Cambridge Econometrics and found that a no deal will force an additional 900,000 people into poverty.

The impacts on poverty levels will, of course, be related to which policies the government decides on. The benefits freeze end is set to end in April 2020 and JRF’s analysis suggests that even in the event a no deal, poverty levels could fall if benefits were to be uprated at the same level as inflation. Policy in Practice has called for an end to the benefits freeze on several occasions, most recently in our response to the 2018 Autumn Budget.

Overall government finances should also be considered. Under the disorderly scenario GDP is forecast to be 4% lower by April 2021, whilst in the short term GDP could fall by as much as 7.75%. Borrowing may rise to financial crisis levels and in this scenario, there is the risk of further cuts to public spending.

A poorer economy will, as with the financial crisis, hit the lowest earners hardest. Households, local councils and government should consider the financial resilience of households to prepare and plan for any adverse effects on living standards.

While ultimately, government will need to make decisions that protect low income families from the potential and likely negative impacts of Brexit on living costs, it makes more sense to be proactive in building financial resilience. There are several steps that local authorities can take.

Local authorities can explore their household level datasets via Policy in Practice’s LIFT Dashboard to identify vulnerable families. Councils can identify individual households who are coping, struggling, at risk and in crisis, both now and under future scenarios, such as if they moved onto Universal Credit, or if living costs were to rise as modelled above. Understanding the impact on individual families allows councils to target support proactively.

Increasing take-up of benefits can help to increase financial resilience in these uncertain times. We know that over £10 billion of income-related benefits are unclaimed every year so ensuring a household is receiving its correct entitlement, as the Royal Borough of Greenwich has done, can be a relatively quick way to improve the financial resilience of households.

The LIFT Dashboard’s benefits take-up screen enables users to drill down to households who may be missing out on unclaimed benefits. It can also help identify households that are eligible for utility discounts such as WaterSure, the Warm home Discount or other schemes put in place by utility companies to help struggling families.

Identifying and alerting people to unclaimed benefits can have a significant impact the finances of a household. 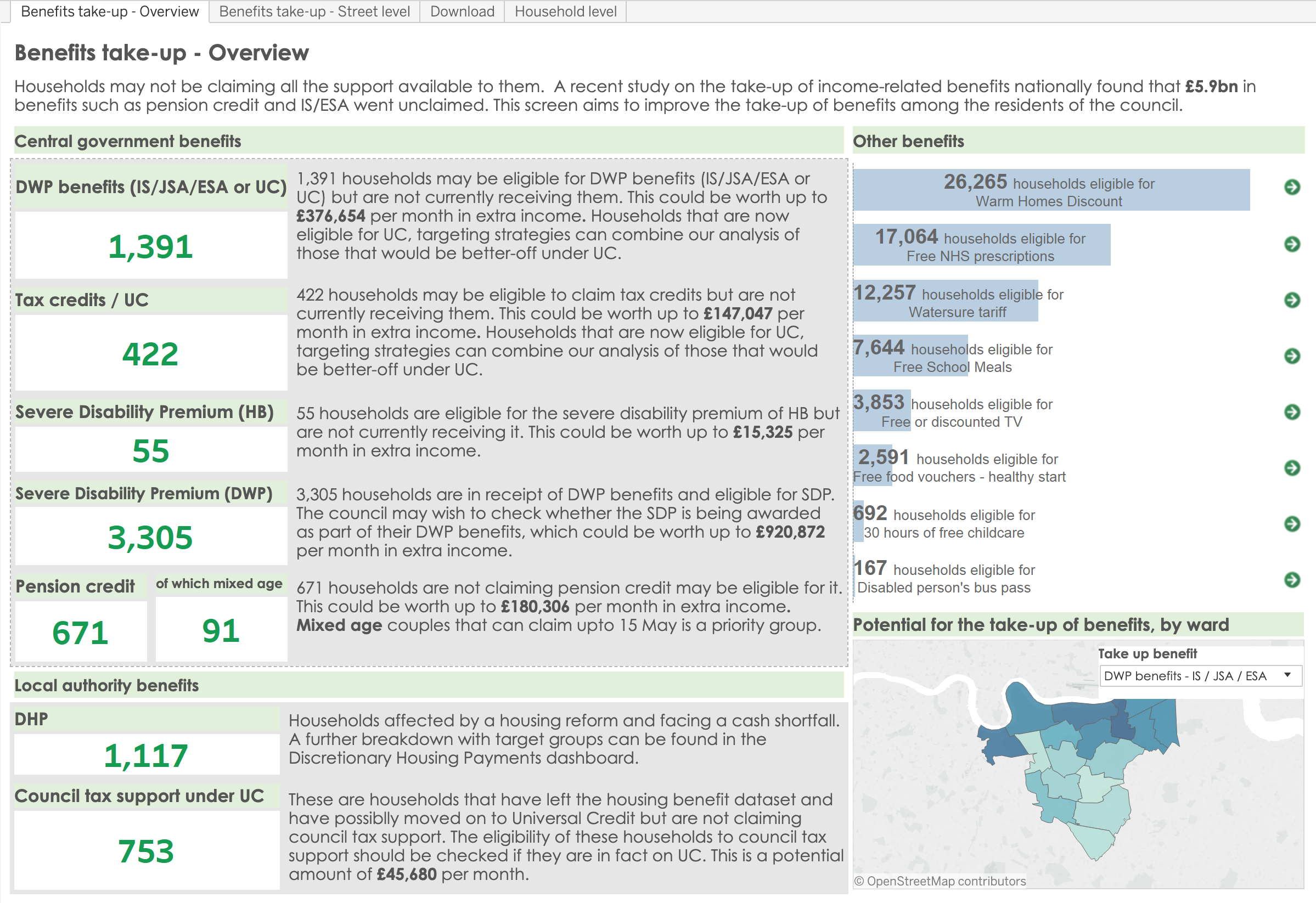 The LIFT Dashboard can identify those who are missing out on benefits, a simple way to boost a household’s financial resilience

The severe disability premium is a benefit awarded by the DWP to help people without anyone to care for them with the costs of their disability. As well as boosting financial resilience SDP claims can be backdated, so a successful claim can be worth a substantial amount.

If someone receives SDP as part of Housing Benefit they are likely to be eligible for the severe disability premium as part of their DWP benefits. The datasets PIP process on behalf of councils can identify this if the lead claimant or partner are carers and in receipt of carer’s allowance. The presence of another carer in the household is inferred from the eligibility to an extra bedroom due to the presence of a carer.

We do not know if they are receiving the relevant SDP amount from DWP. If they are not getting the relevant SDP award from DWP, this may be because they may have a carer who is receiving carers allowance (or the carers element of Universal Credit) on their behalf. Local authorities may have access to this information on a case by case basis through the DWP’s Customer Information System.

It may still be worth contacting these couples because SDP is typically worth more than carers allowance, and receipt of SDP may also delay the Universal Credit claim. If they are not getting the relevant SDP award from DWP, they may be able to make a backdated claim for SDP, which could be worth a substantial sum.

Residents can check their own benefits income, for free

Note that these calculations can be complex. People can see how changes in their household circumstances might affect their income by using our free Benefit and Budgeting calculator. As well as showing what benefits you could be eligible for, it suggests possible actions you could take to improve your financial resilience, both now and in the future. You can adapt your earnings and expenditure to easily see how take-home income might change as a result of a change in circumstances.

A recent Policy in Practice webinar featured Corin Hammersley, Royal Borough of Greenwich, speaking about how their analysis has helped them to target relevant support to affected families. They also now understand the impacts of higher living costs on their residents as a result of additional analysis carried out using their existing data.

July
Back to normal: coping when Covid-19 welfare support is withdrawn
On-demand webinar
LISTEN BACK