Supported by Trust for London Policy in Practice has embarked on an ambitious project to track changing living standards for almost one million Londoners. By combining anonymised household level data sets from councils across London we are tracking income, employment and poverty for half a million low-income households over two years, on a monthly basis.

Data can tell us what impact national and local policies are having on low income households and help us design better interventions.

The project proves what can be revealed when local authorities collaborate with their data. Tracking households over time tells policymakers what support is effective. The evidence base we’ve built is now a powerful tool, capable of influencing central government. Our approach is proven and deserves wider application.

We believe that administrative data is so influential it can drive the future of social policy. Some councils taking part in this project are showing how. They’re using insights from their data to identify struggling families early and targeting support, to avoid crisis.

To find out more or get involved please email hello@policyinpractice.co.uk or call 0330 088 9242.

New analysis: Who are the most financially vulnerable residents in London?

Be part of London’s recovery

Proactively identifying and targeting support to people who need help the most has never been more important.

In a unique research project funded by Trust for London Policy in Practice has analysed low-income Londoners’ living standards using data from councils across London over the last four years. We found that working-age low-income Londoners have become increasingly financially vulnerable and the decline in living standards meant many were not prepared for the financial impact of COVID-19. View the latest Living Standards Index for London here.

Automation and monthly updates, backed by support from Innovate UK, mean that you will be able see what is happening with low income households in real-time, helping you with your immediate strategic and economic planning.

Data analysis can tell us which Londoners are most vulnerable now, who will be most vulnerable in 2021, how this will impact council finances, and how to design better interventions. Be part of our pan-London analysis to get monthly insights, and benchmark impacts in your borough against your neighbours.

We have secured funding to continue our data led investigation, now with real-time monthly updates, and we want you to join us. The research project is free and will give you insights to design better interventions.

London Boroughs who are participating 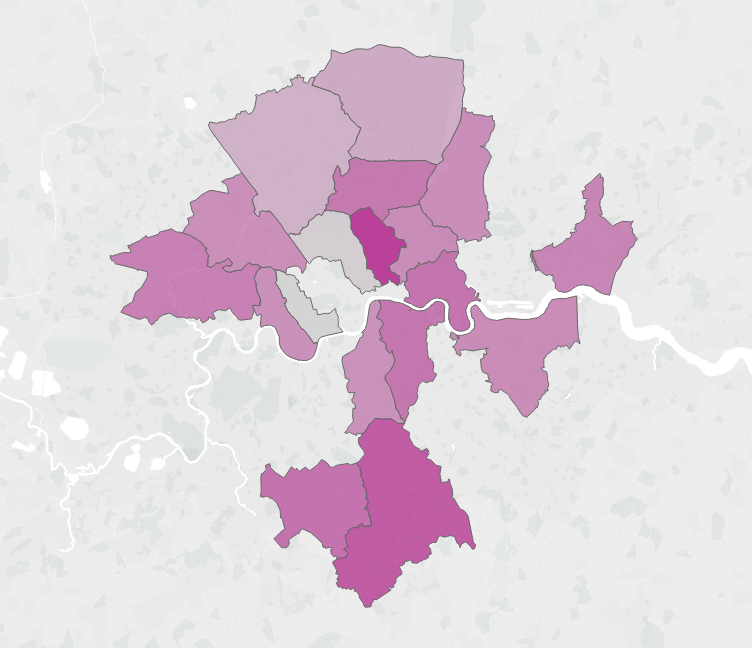 We are actively recruiting more London Boroughs to join Wave Two. It is free to take part and you’ll learn how the living standards of low-income households in your area compare to the rest of London.

London Boroughs not yet participating

The analysis has been helpful throughout, in particular for my economic development colleagues in identifying what is on the horizon for the many self-employed and residents we have working in the gig economy.

We are happy to take part in this important project that tracks the living standards of London’s most vulnerable residents. It’s cost free, sending our data was easy, and we’re learning valuable insights.

This project has been an opportunity to better understand how our resident’s living standards benchmark against others in London, and get to grips with the drivers behind those differences. It will absolutely inform our poverty tackling strategy going forward.

With welfare reform, rising living costs, job insecurity and the roll-out of Universal Credit, it is a time of real change for low-income Londoners. The response from policy makers needs to be right if we are to prevent many thousands of people from being pushed into real financial hardship because of the changes.

This project is unique in the way that it examines household benefits data for over half a million Londoners and allows that data to be linked over time.

20% of the success of this project lies in the data, 80% in the collaboration.