The rollout of Universal Credit is here

A report out this week by the Institute for Government suggests that Universal Credit now appears on track to succeed. This chimes with what we are hearing on the ground. In recent weeks, the majority of the people we regularly talk to in local authorities now accept that the welfare system is about to fundamentally change and they are considering what their role will be within the new benefits service.

Uncertainty remains, however, given that the Universal Credit now live across all Jobcentre Plus offices is a toe-in-the-water compared to the full version of Universal Credit. Currently, 300,000 households are Universal Credit recipients (with 40% of those in work). Pension age households will continue to claim Housing Benefit and council tax support sits outside the new system. The Secretary of State has announced a further delay to full rollout by another year (to March 2022). There appears to be little appetite to accelerate the pace given their ‘slow and steady’ approach to rollout to far.

That said, the full service is beginning to rollout and, starting with Bath and ending with Tower Hamlets, it is expected to reach 46 Jobcentre Plus areas by March 2017. The plan for rollout across the remaining 334 Jobcentre Plus areas has yet to be announced. Analysis by Policy in Practice for the Financial Inclusion Commission found that the biggest factor is not the rollout across the Jobcentre network, but take up within individual Jobcentre Plus offices. This may be about to change: two local authorities we spoke with on full service UC said that they forecast one-third of their current working age Housing Benefit caseload to be on Universal Credit next year.

The opportunity for Universal Support

Policy in Practice met with Lord Freud at a roundtable event about Universal Support, organised recently by the Centre for Social Justice.

The DWP has recognised that there will be a role for local government in the delivery of frontline support for UC.

Universal Credit: A review of the local authority led pilots 2014 by LGA

It was useful to focus on the local delivery of Universal Credit – Universal Support. The important distinction will be where that line between central and local responsibilities is drawn and it is was clear at the roundtable event that Universal Support and the effectiveness of local delivery remains a key part of the programme for the Minister for Welfare Reform.

The local authority participants, representing Westminster, West Lindsay, Tandridge and Newcastle councils, clearly presented their strengths and shared objectives with the aims of Universal Credit. Event attendees heard about the key role local authorities play in supporting vulnerable households, offering support that prevents destitution, with the aim of helping people to progress. They are closest to their residents and the challenges they face, most notably debt. Other support services they offer include housing, council tax support, discretionary housing payments and other hardship schemes, the troubled families programme, employment support, information and advice (whether commissioned or delivered) and support through their Adults’ and Children’s services teams.

There is a lot of universal support that already exists – a key question for the formal programme is how this support is harnessed. Councils argue that by pulling all of their services together they are able to provide more effective support. Policy in Practice recently helped one local authority to do that using information from datasets covering housing benefit, council tax support, troubled families, adult social care, arrears and discretionary housing payment schemes – the level of insight we were able to uncover for each low income resident was striking. Read more here. 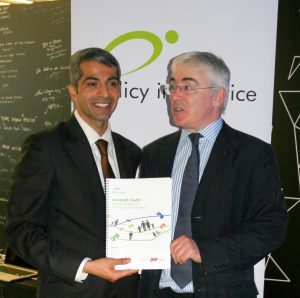 The Minister listened carefully to the representation made by all participants, people from local authorities and from the community and voluntary sector, who equally have an important role to play. He showed an excellent understanding of where local authorities could add value.

The Minister’s key questions were around how local services delivered through local support would interact with the centrally administered Universal Credit programme.

There was a clear distinction between the data available for Universal Credit (all UC recipients), and data for supporting more vulnerable residents in receipt of Universal Support. The Minister was open to views on what data goes out of DWP to local authorities, and what and comes back via Universal Support. The Jobcentre Plus advisor role seemed limited to the initial triage of claimants, identifying those who would benefit from more in-depth support without having to provide that support themselves. A new Secretary of State plus a Minister for Welfare Reform in listening mode creates an important opportunity to influence the direction of Universal Support, and Universal Credit.

Policy in Practice deeply values our engagement with local authorities, who we work with to provide detailed analysis on the impacts of welfare reform now and in the future, and who also benefit from opportunities we foster to engage with Ministers and other senior government stakeholders.

Lord Freud launched our publication Universal Credit: Towards an Effective Poverty Reduction Strategy in 2014, (funded with the support of JRF) and earlier this year we held our second Leading Lights Network event, this time at the House of Lords. The event gave participants an opportunity to make connections across local government, housing associations and employment service organisations, and to discuss practical issues with the local delivery of Welfare Reform at the House of Lords, with Baroness Stroud.

We want to agree a common agenda with DWP around the release of Universal Credit data to local authorities, in order to target Universal Support effectively. We also want to speak with a common voice on the strengths of local authorities and what they need from Universal Credit in order to continue to deliver (more) effective services, and feedback to some of the successes and challenges of working with Jobcentre Plus and the Universal Credit programme locally to central government. Put your hands up if you want to join our Leading Lights Network for engagement and influencing.