Professor Philip Alston, United Nations Special Rapporteur on extreme poverty and human rights, made a detailed and impactful statement on his visit to the United Kingdom on Friday 16 November 2018.

After gathering evidence from visits across the UK, including first-hand accounts from people living in poverty, Professor Alston concluded that it is “patently unjust and contrary to British values that so many people are living in poverty.”

“Cuts are being made without either measuring or accounting for their broader impact [ ]. £1 in every £5 spent on public services is making up for the way that poverty has damaged people’s lives.”

His statement has garnered a considerable political response, with Prime Minister Theresa May’s spokesperson commenting that “we strongly disagree with the analysis”, and Amber Rudd using her first parliamentary appearance as Work and Pensions Secretary to criticise the tone of the report. However, a spokeswoman for the DWP said that they had no dispute with the statistics used by Alston.

Policy in Practice broadly agrees with Alston’s report as an excellent summary of the current situation in the UK. Many of the findings and suggestions made echo our own recently published analysis.

The critical role of local authorities

Alston was clear about the importance of local authorities, calling them a “real social safety net.” Many of the problems cited in the report are being proactively tackled by local authorities we work with.

They [local authorities] have expended significant expense and energy to protect people from what is supposed to be a support system.

Local authorities play an increasingly important role in providing support and we work with around 90 local authorities who are proactively helping their residents and tackling poverty. Luton Council, for example, has developed a data-led anti-homelessness strategy. By using Policy in Practice’s LIFT Dashboard, Luton is able to proactively identify households at risk of homelessness and target support to them accordingly. They’re not just responding once the problem has arisen.

Alston repeatedly warns of the risks of ‘over-digitisation’. The digital by default nature of Universal Credit presents a barrier to many claimants, especially poorer and more vulnerable ones. The help frontline staff gives to claimants to navigate the application system is crucial. In our recent work for supported housing clients we interviewed some residents who are Universal Credit service users, as well as supported housing staff and JobCentre Plus work coaches. We found that only a third of interviewees managed to complete the digital claim process without support, and interviewees with learning difficulties or mental health difficulties found the process especially difficult.

The many billions advertised as having been extracted from the benefits system since 2010 have been offset by the additional resources required to fund emergency services by families and the community, by local government, by doctors and hospital accident and emergency centres, and even by the evershrinking and under-funded police force.

We recently wrote to Frank Field MP, Chair of the Work and Pensions Select Committee, with suggestions on how to improve the delivery of Universal Credit. We suggested that the DWP should improve partnership working with support organisations, develop a more flexible approach to payment options and provide greater support to both make a claim and manage a claim.

We also highlighted the need for the DWP to invest in specialist trained staff to answer complex telephone queries and to deal with vulnerable claimants sensitively and knowledgeably.

We outlined how the Policy in Practice Benefit and Budgeting Calculator is used by support organisations to show people likely changes in their income, possible ways to maximise income and review their budgeting. The tool helps advisors have objective, supportive conversations with people on low incomes, giving them information they can use to make their own decisions in moving towards financial security.

The impact of the 2018 Autumn Budget

Alston’s statement picked up on the impact of the recent Autumn budget changes, a topic on which Policy in Practice has already published a report.

Like Alston, Policy in Practice welcomes the extra  £1.7 billion put aside for benefit support under Universal Credit, and the additional £1 billion to assist the transition for households migrating to Universal Credit. Furthermore, we’re pleased about the changes to the delivery of Universal Credit, namely the run-on of Jobseeker’s Allowance, Employment and Support Allowance and Income Support, which will reduce the initial waiting time from five to three weeks.

Whilst Alston acknowledged that the majority of those in poverty come from working households, he did not look at this in light of the budget. Our post-Budget analysis found that employed households on Universal Credit gain £18.41 per week from the budget and will, on average, be £9.13 per week better off compared to under legacy benefit.

However, the budget has not had a uniformly positive impact. Income for households with a person who is ill or disabled will be similar, post-budget; these households will still be an average of £28.76 per week worse off under Universal Credit.

Furthermore, self-employed households hit by the minimum income floor will be a further £2.42 per week worse off as a result of the Budget, since the the increase in the National Living Wage from April 2019 results in a higher assumed income being used in the assessment of support for self-employed households, and so correspondingly lower benefit support. This loss is higher than any gains in support as a result of increased work allowances under Universal Credit compared to legacy benefits. Read the evidence we recently gave to the London Assembly on self-employed people and Universal Credit here.

Many of the changes announced in the budget will not take place immediately, reducing their positive impact. Whilst Alston picks up on the reduction in the credit payment cap from 40% to 30%, and the reduction in the delay between application and receipt from five to three weeks. he doesn’t mention that these changes will not happen until October 2019 and July 2020 respectively. We agree with the recent Trussell Trust statement that these delays are unnecessary and that people will continue to suffer in the meantime.

Alston identifies child poverty as an important and growing problem, citing the negative effects of the benefit changes introduced in April 2017 which limited benefit support to only two children. Using a Policy in Practice LIFT Dashboard, Camden Council identifies and tracks low-income households with children, pinpointing households that are or could be eligible for free childcare. 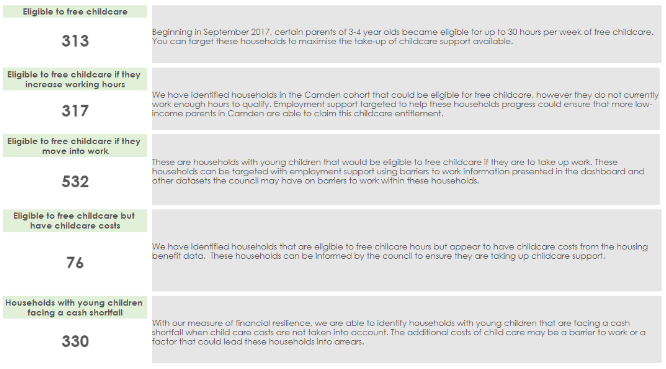 Our recent analysis shows that child poverty is likely to persist, especially since the transitional arrangements put in place for families with three or more children, will end once managed migration onto Universal Credit begins. Even after the Autumn Budget changes, 76% of households with more than two children will still be worse off under Universal Credit, losing an average of just under £50 per week.

Data-led prevention strategies are at risk

Millions of families will make a Universal Credit claim in the coming months, many of whom will turn to local authorities for support for the first time. We work with councils to show the cumulative impacts of welfare reforms on people and help target personalised support.

Local authorities are set to lose vital administrative data on vulnerable low-income families, currently collected via Housing Benefit. As Universal Credit rolls out, this information will disappear, drastically limiting councils’ ability to support people. There is no current arrangement between DWP and councils to systematically share similar administrative data available through Universal Credit.

Local authorities have a statutory duty to support their most vulnerable residents, and have good reasons to be concerned. They need Universal Credit data to:

We need to act

Not replacing the adminstrative data available from Housing Benefit with Universal Credit is a huge mistake. Not only will this undermine local authorities’ ability to fulfil their statutory duties but it may also result in higher costs to the public in the form of increased demand for temporary accommodation, increased levels of indebtedness and a less effective use of public resources.

We call on the Government and Parliament to urgently consider how to share Universal Credit data between the DWP and local councils across the UK. Please join us.