Budget 2018: how will the incomes of people on Universal Credit be affected?

Universal Credit was a big talking point in the run up to Budget 2018. Concerns about managed migration, together with the increase in the number of households receiving the new benefit, contributed to this.

In the budget, Chancellor Philip Hammond responded by providing a £1.7 billion boost to benefit support under Universal Credit, together with an additional £1 billion to help households migrating to the new benefit. Today, Policy in Practice publishes its findings on the impact some of these changes will have on the incomes of low-income households nationwide. The changes we focus on are the increase in work allowances under Universal Credit, the increase in the National Minimum Wage and the higher Personal Tax Allowance, and analysis of the additional transitional support for people as they move onto the new benefit.

These changes will support many working households, boosting their incomes as they transition onto Universal Credit. The provisions announced in the budget have been welcomed by Policy in Practice and others, especially after years of cuts to Universal Credit and freezes on many other benefits. This is a clear step towards making Universal Credit much more manageable for many. That said, the budget will affect different households in different ways. Some will see particular benefit from the changes announced, while others will see little or no benefit at all.

Fewer households will be worse off under Universal Credit 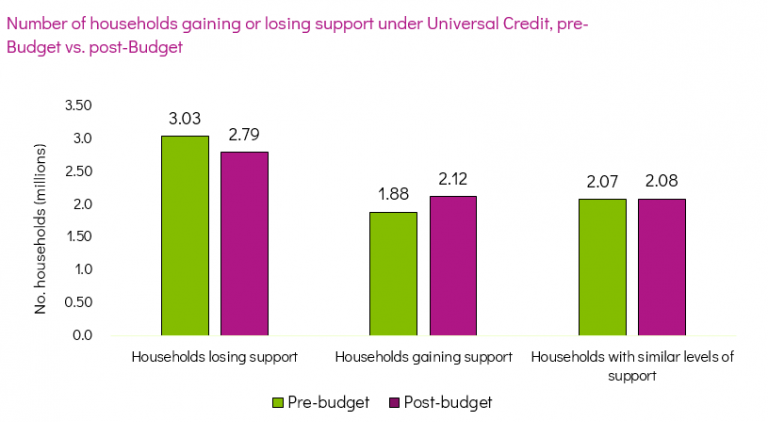 Factoring in the changes announced in the budget, 40% of households are expected to be worse off under Universal Credit, down from 43% under pre-budget Universal Credit.

The impact across different household types is uneven

Any new benefits system is expected to have at least some redistributive effect. Even with the Budget 2018 amendments, the imposition of welfare cuts alongside Universal Credit means that winners and losers are not balanced.

1. Employed households are the big winners

Employed households gain £18.41 per week from the budget and will on average be £9.13 per week better off compared to legacy benefits. This reflects a combination of increased work allowances, the higher minimum wage and higher tax allowances.

Once the Minimum Income Floor is applied, the average self-employed household will see their household income reduce by £50.86 per week compared to legacy benefits. This is a slightly greater reduction than under the current, pre-budget scenario because the National Living Wage sets the level of the Minimum Income Floor. The increase in the National Living Wage from April 2019 results in a higher assumed income being used in the assessment of support for self-employed households, and so lower benefit support. Self-employed people that are breaking even could be as much as £9,000 worse off relative to the system under legacy benefits.

3. Disabled and ill households are not supported by the budget

The average household where someone is receiving an illness or disability-related benefit will still be, on average, £28.76 per week worse off under Universal Credit compared to legacy benefits. This is due to the limited impact of the increase in work allowances on disabled working households.

The extension of these allowances will affect:

4. Overall, working households will see some benefit from Budget 2018

The number of working households that will lose support under Universal Credit falls from 1.9 million to 1.7 million. The average low-income working household will be £12.42 per week better off after Budget 2018, however average household income for all working households is still less than it would have been under legacy benefits, with a reduction in support of £10.75 per week.

5. Households with children are more likely to be better off

A step in the right direction, but there is more work to do

Universal Credit is an ambitious social policy reform built to tackle many of the failings of the legacy benefits system. Despite this ambition, aspects of the implementation, design and funding of Universal Credit have been repeatedly criticised.

The changes announced in the budget are welcome and a definite step in the right direction. However, more households will still be worse off under Universal Credit than better off. Those who are working who are set to gain the most from this budget are working people, many of whom were already set to gain from Universal Credit. Our analysis has identified specific groups of households, such as the self-employed or disabled people, for whom Universal Credit may still mean significant reductions in income.

In addition, a host of administrative changes, such as the five week wait for a first payment, the move to monthly payment despite many people on low-incomes paid weekly or fortnightly, are some of the factors that have caused confusion and, in some cases, unnecessary hardship. In this context, the increase in transitional support is also welcome.

The Department for Work and Pensions should continue to invest in Universal Credit so that these groups are not forgotten. With managed migration on the horizon, the government must work closely with local authorities to identify and support households at particular risk. There is still opportunity to improve Universal Credit so that it feels like a significant improvement on the legacy system for those of us who rely upon it.

“It’s great to see money go back into work incentives within Universal Credit, and support to help people with the transition. Not having these measures in place at the outset has been a false economy. This research highlights that despite the positive news in the budget, many will still lose out. Our household level analysis of who wins and who loses can help DWP and local authorities get extra support to those that need it the most.