The Conservative route to fighting poverty: 3 things for Government to consider 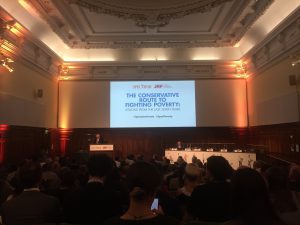 In a year when Brexit dominates the headlines, it was great to speak at an event that puts issues of poverty, austerity and social justice firmly back on the agenda. Over the last seven years, the poverty rate has barely changed despite record high rates of employment and GDP growth that has often outstripped that of other advanced economies.

Last week, Deven Ghelani joined a panel to discuss how best to tackle poverty in the UK at an event titled The Conservative route to fighting poverty: lessons from the last 7 years which was organised by The Spectator. He spoke alongside Katie Schmuecker from JRF, Edward Boyd from the Centre for Social Justice and Matthew Oakley from Social Market Foundation on the successes and pitfalls of recent reforms to the welfare system.

The event also featured a keynote speech by Rt Hon Iain Duncan Smith, former Work and Pensions Secretary, who gave his views on the successes from the past seven years of Conservative-led welfare reform, together with what he believes the focus should be in the next few years.

How successful have welfare reforms been so far?

The verdict on the last seven years of welfare reform is mixed.

Middle income households have benefited the most from progressive increases in the National Living Wage (NLW) and personal tax allowance (PTA). The provision of free childcare is also focused toward middle income families, removing one of the main barriers to work that many people encounter. 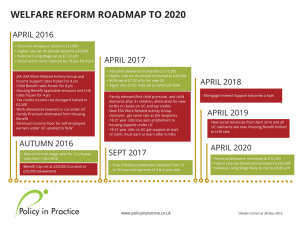 Universal Credit, the new benefit intended to simplify the system and incentivise work, continues to be rolled out across the UK. There are strong concerns that recent cuts to work allowances under Universal Credit, offsets the mitigation measures mentioned above.

For low income households, there is a question as to whether these mitigation measures go far enough. Universal Credit in its current guise is less generous than the Tax Credit system today, weakening the parties poverty fighting credentials. Katie Schmuecker argued that too often, households that work are still poor. In other words, families that are doing “as they’re told” are still unable to escape poverty.

“If work is supposed to be the route out of poverty, and the UK is currently at record-high levels of employment, then how is it that the poverty rate has barely fallen in seven years?” Katie Schmuecker, Head of Policy, Joseph Rowntree Foundation

She argued for an industrial strategy that boosts skills and low levels of productivity in the British workforce, to improve productivity and wages.

This comes at a time when most working age benefits are frozen, while inflation is rising.This hurts households that struggle to move into work the most, and brings into question whether the Conservatives have done enough in the past seven years to tackle poverty. The freezing of the LHA rate, in particular, means that many households see a widening gap between their rent owed and the support they receive.

In short, while the welfare reforms that we’ve seen have laid the foundations for addressing poverty in the UK, they are not enough to tackle poverty alone. Three key points emerged from the discussion which Policy in Practice believes the government should consider if it is truly committed to fighting poverty.

Universal Credit as it is currently stands can do more to incentivise work. While it is moving in the right direction, it is important to restore proper funding, particularly to work allowances which were cut in 2015, in order to support the transition into work.

Universal Credit was in part introduced because of the uncertainty created when people move into work. The administration of the new system risks creating similar uncertainty when people move onto Universal Credit. New claimants have to wait at least six weeks in order to receive their first payment. This is longer than people have to wait for their first payslip, and a time lag that many are not able to afford. Policy in Practice estimates that a one-off investment of £500m, spread across five years would have the waiting time, a small cost in the grand scheme of things, and giving people a positive first impression of the new benefit system.

The government should ensure that Universal Credit meets its original objectives if it wants to properly tackle poverty.

Ed Boyd from the CSJ argued that the current measure was inadequate, with too much focus on money and not enough on the root causes of poverty.

Policy in Practice analysis finds that you can get a more complete view of poverty by taking the costs that people face into account. Disabled people, for example, typically experience much higher costs than someone who is healthy, while a household in London or the South East is likely to face much higher rental costs than one in Wales. 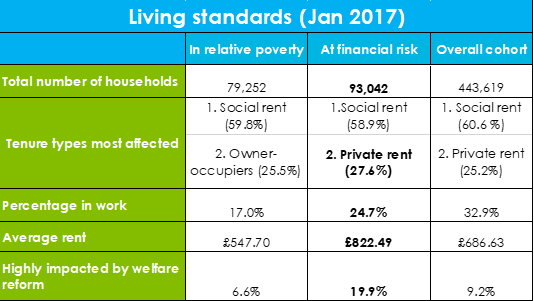 In an ambitious project funded by Trust for London, Policy in Practice has begun to investigate this approach to measuring poverty. By combining Housing Benefit and council tax support data from 14 London boroughs we are tracking the impact of welfare reforms and rising rents across London on 550,000 adults and 350,000 children. Our aim is to identify the characteristics of households in poverty, revealing why some are able to escape but others are not.

Our preliminary findings reveal that 80,000 households are actually below the poverty line compared to 93,000 who are at financial risk when you take needs into account, which is defined as a shortfall when you compare their income with their expected costs.

Unlike the relative poverty measure, the financial risk measure takes into account average costs, which we estimated using figures from the ONS. It is interesting and useful to note how this approach to measuring poverty identifies slightly different households as being highly affected.

We have found that a greater percentage of London households at financial risk are in work and they face average monthly rents that are significantly higher than households under the poverty line. In other words, the most financially constrained households, once we take into accounts costs such as rent, are more likely to be households in work.

In order to understand what poverty looks like in the UK today, the government should consider a wider range of metrics. This includes, but is not limited to, an approach which takes costs into account.

The national pattern of high poverty rates conceals some important regional differences which require an adaptive approach. People in much of Southern England, in particular London and the South East, benefit from better performing schools, better services and more well paid jobs than the North East or Wales. However, Londoners in particular are more likely to struggle with rapidly rising rents. The impact of interventions should be tracked locally too, to understand what is most effective at tackling poverty, and for whom.

These differences mean that the government’s approach to tackling poverty should account for how it is experienced differently, depending on where you live. This should involve continuing to devolve power, resources and, crucially, data, to ensure that local areas have the ability to tackle poverty more effectively. The devolution of Work and Health funding to the Greater London Authority and the Greater Manchester Combined Authority, or DCLG’s homeless prevention trailblazers which provide funding for local areas to innovate in how homelessness is addressed, is a good start.

“The longitudinal analysis of household-level data allows us to assess the extent to which different policy interventions achieve their stated objective. This approach, applied at scale and in a systematic way, should be embedded in the way policies are delivered and monitored at the national and local level.” Deven Ghelani, Policy in Practice

The government should renew its commitment to fighting poverty

Ultimately, the route taken to tackle poverty in the next few years will be driven by the prominence that this issue takes. In a Brexit dominated climate, the appetite for reform and for tackling poverty seen under the last government may well fade or disappear altogether, which would be a real loss.

The actions suggested by the panel last week, plus the three listed here, are not necessarily hard to execute but do require a measure of political will that this new government will need to show.

To read more about our work tracking the causes and consequences of poverty on low income households in London, and to request the Phase One findings our of analysis, click here.