Poverty in the UK: a look at the latest United Nations and Human Rights Watch reports

In the last two weeks, two reports have been released that examine poverty in the UK.

Both publications report an increase in poverty based on extensive evidence from people living on low incomes. Both find similarity of cause, specifically austerity and the extent to which it has fallen on low income families, and both have serious reservations about the government’s response. This blog provides commentary from the perspective of analysis, research and frontline feedback from Policy in Practice and our clients.

The UN report by Professor Philip Alston is the result of an eleven day fact finding visit to the UK in 2018 and includes the government’s response to the draft report from November 2018. The final report showed little change from the draft issued in 2018, finding evidence of increased and continually increasing poverty.

Some of the findings are that:

The UN report pulled no punches, stating that:

“Statistics alone cannot capture the full picture of poverty in the United Kingdom, much of it the direct result of government policies, it is obvious to anyone who opens their eyes. There has been a shocking increase in the number of food banks and major increases in homelessness and rough sleeping.”

“The bottom line is that much of the glue that has held British society together since the Second World War has been deliberately removed and replaced with a harsh and uncaring ethos.”

The Human Rights Watch report presented the findings of research into the increase in food poverty and the relationship with changes in welfare policy, noting the substantial increase in food bank usage from 2013 onwards. 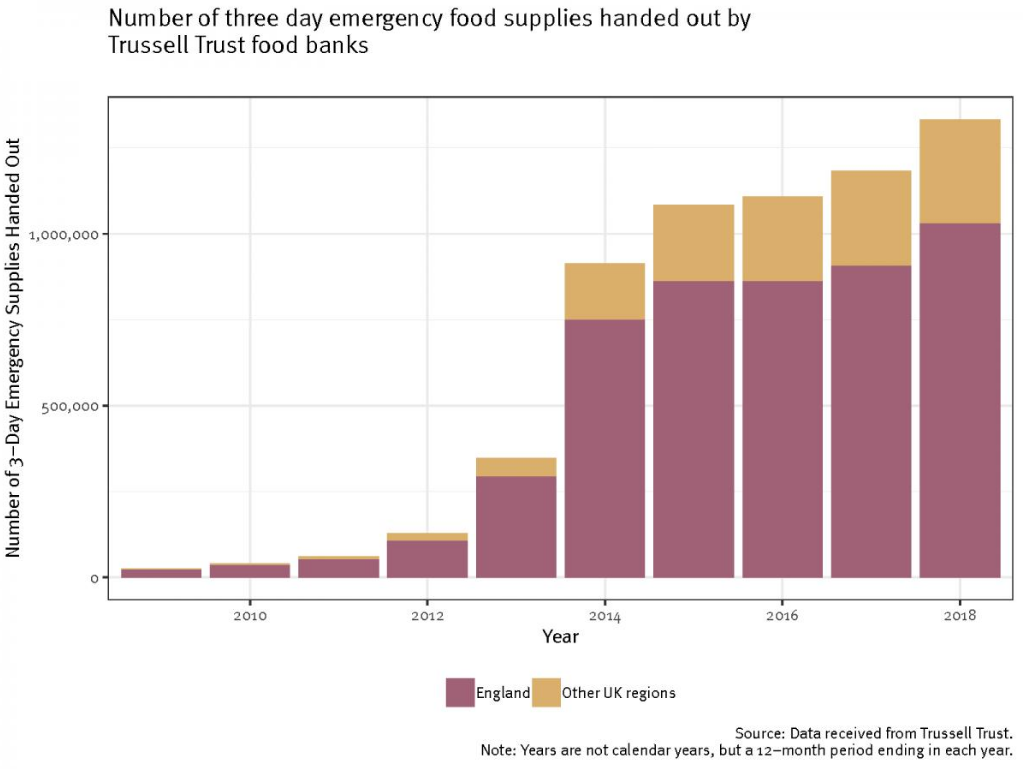 Trussell Trust Emergency Food Supplies 2008/09 to 2017/18. Source: Data received from Trussell Trust as published in Nothing Left in the Cupboards, Human Rights Watch, May 2019

The Human Rights Watch report concludes that “The right to food … remains unrealized for the increasing number of people, many of whom are families with children, living on the breadline.”

Both reports agree on the causes of poverty and the government response. They conclude that policies on austerity and welfare reform had been pursued as part of an ideological rather than economic agenda.

Welfare reforms are ongoing, with many changes still to be implemented.

Commenting on the reports, Policy in Practice said that, while both reports challenged the underlying rationale for austerity, even those who believe fiscal consolidation was necessary ought to question how the cuts fell. Spending on people with the lowest incomes declined as a result of welfare reforms, whilst increases in the personal allowance and minimum wage rises benefited mainly those on middle and higher incomes.

The UN report noted that restrictions in welfare support were not likely to be cost saving due to the impact on other public services.

The UN report stated that:

“Ministers insist that all is well and running according to plan. Despite some reluctant policy tweaks, there has been a deeply ingrained resistance to change.”

“The government’s response ranged for several years from superficial changes to outright dismissal of these problems.”

However, the UN report noted that the government response to evidence of the impact of welfare reform may be changing since the presentation of its draft report. It cited the recent changes to Universal Credit, the delay to managed migration and Amber Rudd’s admission, in February 2019, of the link between government policies and food bank use.

When the findings of in-depth research from two such respected bodies converge, the government is expected to engage and act on both some of the recommendations in these reports and from frontline organisations working with citizens. Policy in Practice has consistently submitted data-led research that supports some of the report recommendations; our evidence on the impact of the two-child policy was referenced in the report by Human Rights Watch.

The role of Universal Credit

Unsurprisingly given Universal Credit’s role as the government’s flagship welfare reform, both the UN and Human Rights Watch reports highlight the impact of Universal Credit on the lives of residents. Philip Alston gave support to the principle of Universal Credit stating that “Consolidating six different benefits into one makes good sense, in principle. But many aspects of the design and ongoing roll-out of the programme raise grave concerns about the adequacy of the country’s flagship benefits programme.”

In both cases, shortcomings concentrated on administration, payment and support. The UN report noted, in particular, the rigidity of the system which stands in sharp contrast to the government’s message that Universal Credit is always carefully tailored to an individual’s needs and circumstances.

Policy in Practice’s work with frontline organisations providing support to residents tends to echo these findings; the rigidity of both support mechanisms and service delivery are a cause for concern. We have consistently recommended changes in support and administration practices that will mitigate against these. The government is implementing an initial non-repayable two-week award for those transferring onto Universal Credit. We also argue that how UC can be made more responsive and flexible to customer need, and how DWP can ensure greater support is available to those who need it.

The role of welfare reform

Both reports highlight groups that are particularly affected by welfare reform. Specifically, those with children and those living with a disability.

People with disabilities are affected by cuts to services and changes in welfare benefit policy. They are highly vulnerable to cuts in local government services, particularly within social care. In addition, Universal Credit does not include specific additions for those with disability (the disability premia). Policy in Practice’s own research into the impacts of the Autumn Budget 2018 showed that households containing a person in receipt of PIP would, on average, be £4,100 a year worse off from April 2019. However, our research also found that the situation is more complicated than that reflected in the UN report. People living with a disability who are also too ill to work will receive similar levels of support through the benefit system as now, and those who are not currently in receipt of PIP but are too ill to work may be better off under Universal Credit.

Nevertheless, it is hard to argue with the gist of the UN report, namely that cuts in public funding will primarily affect the most vulnerable people.

Human Rights Watch showed that, as a percentage of the overall Gross Domestic Product, the proportion of money spent on the budget for welfare for “Family and Children” has fallen to half its 2010 levels. 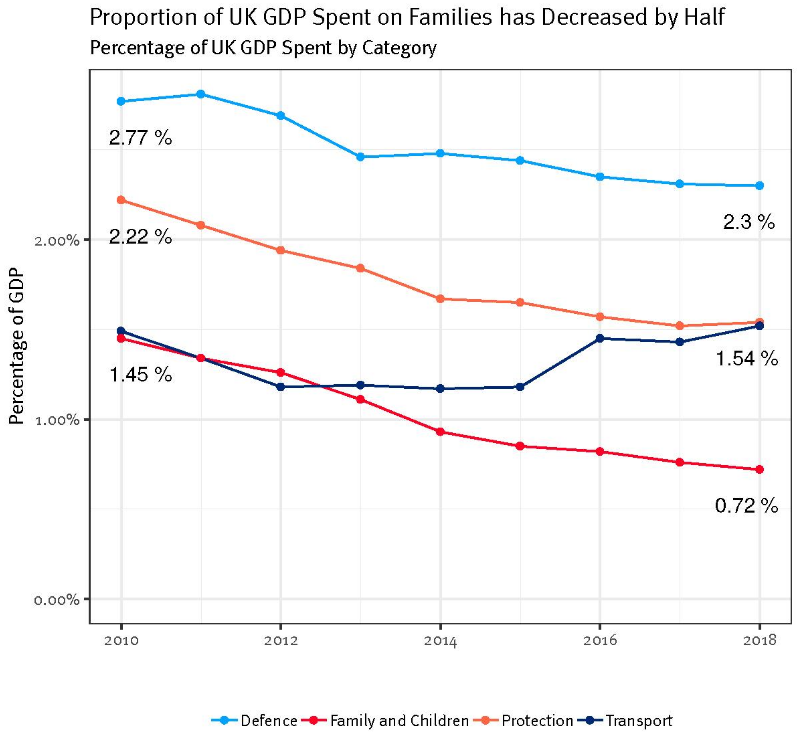 The UN report highlighted the impact of the benefit cap on families. It stated that the government’s own statistical analyses showed that 94 percent of households affected had children. Of these, two thirds were single-parent families and 78 percent of all families capped had at least one child under the age of five.

3 recommendations from the United Nations and Human Rights Watch reports

The recommendations from both of these reports examining poverty in the UK were remarkably similar.

Both reports recommended a better measurement of poverty, particularly food poverty, together with the cumulative impacts of tax and welfare policies. As a leading provider of data-led and evidence-based policy, Policy in Practice particularly supports these recommendations. The development of a new poverty measure by the Social Metrics Commission has received a remarkable level of support cross-party, as well as from frontline organisations. This measure has recently been included in DWP experimental statistics. Policy in Practice has built upon this measure in our analytics. If adopted widely, this could provide a better means of measuring poverty by taking account of outgoings, housing and the additional costs of disability.

2. Changes to some welfare reforms

The UN report calls for an end to particularly regressive measures such as the benefit freeze, the two-child limit, the benefit cap and the Local Housing Allowance limits. Human Rights Watch echo this call to limit the impact of austerity on low income families.

Both reports also make related recommendations regarding Universal Credit payments; the UN report recommends the end of the five-week delay in receiving initial payment and Human Rights Watch recommends revision of payment in arrears. Policy in Practice, informed by our work with frontline organisations, calls for a more flexible system that works for individuals.

The UN report recommends the restoration of local government funding needed to provide critical social protection and tackle poverty at the community level. There is an ongoing review of the funding of local government and the report suggests that findings from the review should feed into funding change.

Policy in Practice works with numerous local authorities who use their housing benefit data to identify vulnerability, engage with their residents and target support to those who need it. One example is the work undertaken by Croydon Council in response to the benefit cap. This data-led approach not only assists residents but also provides long-term cost-savings through reductions in social services support and homelessness. Local authorities have the data that would enable them to dramatically increase preventative work. However, cuts to funding limit the realisation of this potential and create concern over the future cost of dealing with long-term consequences.

Some positive developments that tackle poverty in the UK

The final report by the UN Special Rapporteur did indicate that there had been some positive responses from the Government following the draft report. In particular:

These recent changes to Universal Credit show that the government is listening. In addition to the measures discussed in the UN report, the wider provision of advances and the extension of repayment to 16 months should help those waiting for their first Universal Credit payment. The government has also noted issues raised by the social rented sector and introduced greater provision for direct payment to landlords, together with the development of a landlord portal, to ease communication. Further transitional protections, such as for those for people in receipt of the severe disability premium, and the run-on of current means-tested benefits, should help to smooth the transition to Universal Credit for many households.

These reports on poverty in the UK are timely. There is an increasing amount of data-led evidence of the impact of austerity driven welfare reforms. Organisations including housing associations, local authorities, charities, and the DWP itself have argued that cuts have gone too far. More optimistically, some organisations have trialled innovative approaches to helping and supporting people in poverty, such as the homelessness trailblazer work done by Luton Council, these have informed recommendations for change. In addition, the piloting of Universal Credit managed migration is framed as an undertaking to ensure full-scale migration is informed by testing of approaches.

If the government is in listening mode, there is now data-led evidence, recommendations from stakeholders and reports such as these that can help ensure social protection is available to those who need it.

Now that Universal Credit has been implemented throughout the UK there’s enough evidence of impact to make a clear case for positive change. A listening and collaborative approach will show where the changes to Universal Credit are needed so that it is part of the solution to poverty.

We know that the politicians in Westminster are worried that they’ve become out of touch on issues like this. Last week’s resignation of Theresa May gives her replacements time to look again at the evidence on poverty to avoid policy failure.