Preparing for the lower Benefit Cap: lessons from Croydon

A reduced benefit cap will be rolled out from 7 November. Policy in Practice has been helping local authorities across the country to determine who will be impacted. This article describes some recent work with Croydon where we helped them to identify potential exemptions, and prioritise both financial and employment support to affected households.

The new benefit cap comes into effect on 7 November

The impact that this reform is likely to have on low income residents is significant, and so is the challenge that local authorities will face.

The implementation of the lower benefit cap will be phased-in. The first group to be affected will be 20,124 households who already face a reduction in their housing benefit entitlements due to the benefit cap a the current level. They will see a further drop of up to £115 per week (£58 per week in London) on 7 November. Within 13 weeks all other households with income from benefits above the applicable threshold will also be capped.

We have been using housing benefit and council tax data from over twenty local authorities to identify which households are at risk of being impacted by the lower benefit cap. Our findings show that the number of households impacted will increase, on average, by more than 5 times compared to the caseloads of households currently capped. The average reduction in housing benefit will be around £61.04 per week. 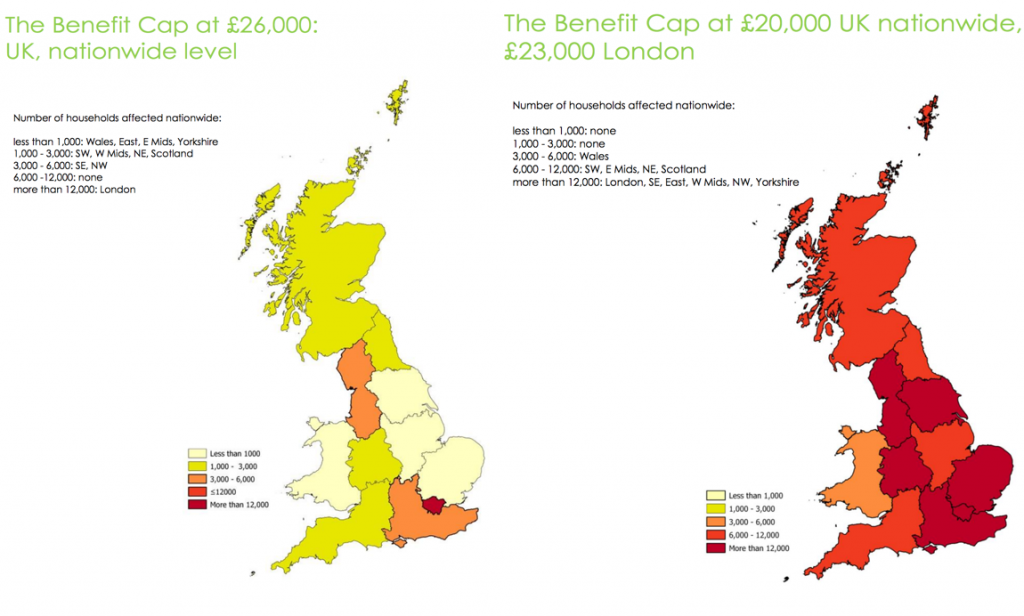 These figures show the magnitude of the challenge faced by thousands of low-income households across the country and by all organisations delivering support to residents in need. A proactive and systematic approach is crucial for local authorities and partner organisations in order to protect as many families as possible from the effects of this imminent change in policy.

Without a coherent strategy ahead of 7 November the cap will severely impact upon affected households and local authorities. For a large number of residents affected by the cap, sustaining and managing their finances will become increasingly challenging. An increase in rent arrears and subsequent evictions are likely to be reflected in higher number of homelessness applications and demand for temporary accommodation, putting councils’ resources under strain.

A single homelessness application could cost a local authority £8,000, while plugging the gap between housing benefit and the cost of temporary accommodation costs £415 per capped household in Croydon, or £860,000 per year once the lower benefit cap comes into effect.

Through our work with the London Borough of Croydon, we are able to share some of the findings of our analysis and, more importantly, a few thoughts on how your organisation can rise to the challenge and turn this into an opportunity to improve the way support is delivered.

“Working with Policy in Practice we have developed information that supports, informs and helps us monitor the effectiveness of our strategies. By better understanding the levels of risk and the concentrated areas where those residents live, we believe resources from inside and outside of the council will be better targeted and more effective. We are deeply concerned with regards to the amounts families will be losing and without a proactive, preventative approach we fear for the longer term impact on residents.” Mark Fowler, London Borough of Croydon

By triangulating our analysis based on housing benefit and council tax data with the DWP benefit cap scan, we identified 758 households, and 2,036 children at risk of being affected by the lowering of the cap in Croydon. Together with the local Benefit Cap Strategy Team, we were able to split these households into different groups and plan our strategy accordingly. We identified:

When triangulating the findings of the DWP with our analysis, 168 cases were identified as capped by the DWP who could potentially qualify for an exemption. These cases ranged from claimants in receipt of Carer’s Allowance, DLA or in the ESA Support Group, to households working enough hours to qualify for Working Tax Credit. If referred to the DWP, these households could avoid the cap and subsequent reductions in their income.

Local authorities should identify households that are exempt before making contact. This avoids undue stress for households wrongly identified as affected by the cap and also saves staff resources by avoiding unnecessary phone calls.

Households who are already facing a reduction in their housing benefit entitlement due to the benefit cap at the current £26,000 threshold will be the first group affected by the lowering of the cap on 7 November. In some cases, households have managed to support their finances after being capped simply by budgeting, without seeking support from the council.

Our previous work with Lewisham council showed how personalised letters using a friendlier tone are more likely to generate higher response rates than standard letters. Phone calls and short text messages work effectively in raising the issue to gain the resident’s attention and schedule in a meeting. Read more here.

In Croydon, 160 households that will be affected by the lowering of the benefit cap already appear to be working. If they are able to increase their number of hours worked to the WTC threshold (or to 16 hours if they are claiming Universal Credit) they would qualify for an exemption from the cap. This group represents the ‘quick wins’: if employment support to these households is delivered in a timely manner, significant financial hardship could be avoided.

Within this group we have also identified 67 households that are not currently working, but who show low barriers to work (i.e. no disability, no caring responsibilities, no young children). A well devised employment support strategy in partnership with Jobcentre Plus could bring them closer to employment.

In local authorities with considerable number of households living in temporary accommodation, the lower benefit cap is likely to have a significant impact. In the borough, 81 temporary accommodation households will be affected by the cap. The costs implications for councils are considerable. Funding must be secured in order to make up the shortfall between rents and the benefit entitlements.

Local authorities could prioritise the use of DHPs to make up this shortfall by automatically awarding payments to all households capped living in temporary accommodation.

Policy in Practice analysis can identify households who will be affected by the cap and who are further away from employment due to high barriers to work. The majority of these households are lone parents with children under 5. In supporting these residents, the strategy should focus on removing those barriers to work, namely by ensuring access to child care.

A geographical analysis can help local authorities verify whether child care facilities in the neighbourhood have sufficient capacity to accommodate these children. In addition, local authorities could award Discretionary Payments to these households to cover childcare costs while supporting the parent into seeking employment.

Our analysis showed 77 households affected by the cap in the DWP scan as not being with the council’s housing benefit or council tax support records. These households may have moved to another authority, or no longer by impacted by the cap, but a proportion will be on Universal Credit.

In comparison with information available for cases within the housing benefit records, planning and delivering targeted support to claimants in need on Universal Credit becomes a whole other challenge. Policy in Practice will be writing to the DWP to ensure information on capped households that move onto Universal Credit is shared with local authorities. This example alone highlights the need for the DWP to share more information on these households with local authorities, and move towards an holistic system of Universal Support Delivered Locally.

Act now through the smart use of data to target support

Each local authority in the country sits on a mine gold of information about their low-income residents: the housing benefit and council tax data sets. These data sources can provide the evidence on the basis of which an effective support strategy can be planned and delivered.

Policy in Practice is helping many local organisations assess the impact of the benefit cap and other welfare reforms at a household-by-household level, identifying those families affected by which reform and by how much.

On 7 November all local authorities will have households who are going to be impacted by the lowering of the benefit cap. Our work with over twenty local authorities across the country points to this reform as the biggest challenge yet arising from changes to the welfare system.

Alongside the devastating social impact of families having to be rehoused, we estimate that the cost of not acting through temporary accommodation, discretionary housing payments and potential eviction costs could be as high as £2 million to Croydon Council.

Smart use of data is helping this council to respond proactively, with a targeted strategy to limit the effects of this policy change and improve the way support Is delivered to residents in need.

Working with Policy in Practice, Croydon’s frontline advisors are geared up to support, and have prioritised targeted lists to work from. However, communicating the impact to the people affected and what they can do to avoid the cap, is often still a major challenge. 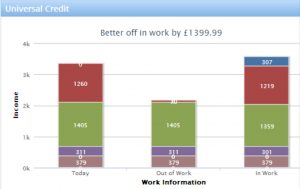 Software by Policy in Practice brings the welfare system to life. The image here shows a resident how much support they receive today, how this falls when the Benefit Cap comes into effect, and how they can avoid the cap and be financially better off by moving into work.

Policy in Practice’s Benefit Cap White paper identifies six key lessons local authorities can learn from the implementation of the benefit cap in 2013, to mitigate the impact as the new lower cap comes into effect.

Policy in Practice will be working with the Trust for London, Croydon council and other authorities to track the impact of the cap as it moves forward.