Two-child limit: Policy in Practice’s evidence to the Work and Pensions Select Committee

Policy in Practice was invited to give evidence to the Work and Pensions Committee in December about the potential impact of the two-child benefit limit, ahead of the policy’s scope being widened in February 2019.

Zoe Charlesworth, Head of Policy at Policy in Practice, was joined on the panel by policy experts from Child Poverty Action Group, the Institute for Fiscal Studies and Women’s Aid. We were asked to reflect on the aims of the policy, whether they are likely be met and the hardship that we expect it to cause.

Key findings from our evidence 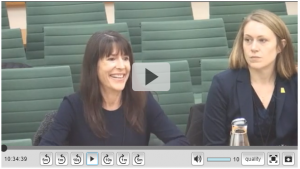 Zoe Charlesworth, Policy in Practice, gave evidence to the Work and Pensions Committee on the impact of the two-child benefit limit.

The Autumn Budget 2018 confirmed that families with more than two children will move to Universal Credit from February 2019.

Families who had their third child after April 2017 will have their Universal Credit award assessed under the new 2-child limit, which means that their third and subsequent children will not be allocated a child element allowance under Universal Credit. Our analysis has found that:

The Government’s objectives in introducing the two-child benefit limit are as follows:

Our evidence finds that there are limits to achieving these aims, and that the policy will cause avoidable hardship to families.

Savings to the Treasury come at a cost 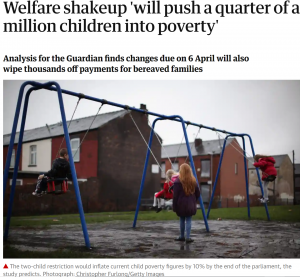 The primary driver of the two-child limit was the desire to cut costs from the social security budget.

The policy is likely to deliver savings to the Treasury. DWP’s own impact analysis predicted that the two-child limit is set to save the government £1bn per year by 2020 across the welfare system.

Policy in Practice’s own analysis in April 2017 found similarly, however we also concluded that this comes at a cost, and that the two-child limit will increase child poverty.

We plan to carry out analysis on the impact on Universal Credit specifically and will send any results to the committee.

Fairness for people in work?

The two-child limit was proposed as a measure to limit taxpayers’ spend and reinstate responsibility to those claiming support. Some of the tweets we received highlight why the policy is politically popular:

However, superficial support for the policy is likely to fall as it comes into effect, and a wider group of households, including all those in work, are impacted.

The policy affects all claimants with children, not simply those receiving out-of-work benefits. Working households will be hit the hardest among those affected by the two-child limit. Table 1 shows the financial impact of the two-child limit on Universal Credit awards, broken down by employment status. We modelled nearly 60,000 low-income families on Universal Credit, with and without the limit applied:

Table 1: reduction in award due to the two-child limit, by employment status

Families in work would face a greater reduction in income than their out-of-work counterparts. This is because out-of-work households are more likely to be impacted by the benefit cap, leaving a lower proportion of their income subject to the two-child limit.

In addition, 70% of the 2 million low-income families at risk of the 2-child limit, if they have another child, are currently working. The policy doesn’t only affect those on benefits, because social security is a form of insurance, under this policy, larger families are no longer ‘covered’.

Any savings made by the two-child limit are likely to pop up as costs elsewhere. Families with three or more children will continue to require support and have to rely on friends and family, or face financial hardship. Where families cannot meet the shortfall, then local authorities will have to shoulder an increased demand for support services as vulnerability increases, and they have to meet their statutory duties to relieve hardship. This doesn’t take into account the long terms costs of more children living in poverty, and the likely worsening of long-term outcomes in health and education for affected children.

Issues with the policy are further evidenced by a range of exemptions for affected families.

In her first appearance before the Select Committee on 19th December, Secretary of State for Work and Pensions, Amber Rudd committed to “carefully [consider] what action to take going forward” to restore confidence in Universal Credit. She shared the Committee’s concerns around the retrospective application of the two-child limit upon households who fall into unforeseeable hardship.

In addition to the exemptions for children with a disability, exemptions could be put in place to provide support to those families who fall upon the social security net who already have more than two children, or those who form through a couple with children from previous relationships.

Weakening social insurance for households who have made life decisions in times of financial stability, whilst paying into the welfare system, stands in contrast to the government’s aim of fairness to the taxpayer.

In the face of the two-child limit, local authorities can take measures to proactively engage households who may be impacted by the policy. Insight into their circumstances may better prepare families before they face a reduction in their income. We at Policy in Practice work to support local authorities do just that, by increasing the visibility of their low-income cohort and the impacts of individual policies on households’ finances.

Our dashboard drills down to identify which households are affected by the two-child limit, and how many are in financial risk or crisis.

In acknowledging the key role played by local authorities in supporting their most vulnerable residents, we urge the Government and Parliament to consider how to share Universal Credit data between the DWP and local councils across the UK.