‘Just About Managing’ families hardest hit by welfare reforms in 2020

On Wednesday 23 November the Chancellor will unveil a new budget plan for Britain until the end of this parliament in the traditional Autumn Statement.

We don’t yet know what measures he will announce in the first official economic statement since the Brexit vote.

The Government, however, has announced no new benefit cuts over the course of this parliament and the Prime Minister has repeatedly expressed her commitment to support the group of ‘just about managing’ families.

Policy in Practice analysis featured on the front page of The Guardian today shows that the cumulative impact of welfare reforms already announced will continue to hit the pockets of low earning households through to 2020.

Policy in Practice has been working with over 30 local authorities across the country over the past two year, helping them to assess the impact of welfare reform on each individual low income family through our software and consultancy services.

This household level approach, combined with our policy modelling software, shows the cumulative impact of each single policy change policy change announced across four different government departments from 2013 to 2020.

Our analysis focuses on a cohort of 187,475 real working-age households and is based on Housing Benefits and council tax support data shared with us on an anonymised and aggregate basis by 17 local authorities across England, Scotland and Wales. 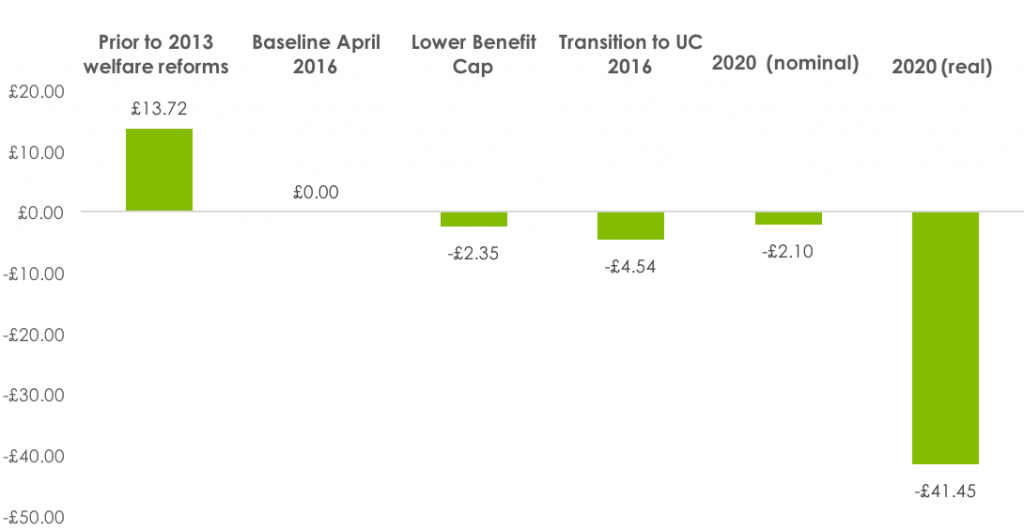 The cumulative impact of welfare reforms on 187,000 households across a spread of seventeen local authorities across the UK.

This means that the families affected, along with limited support from local authorities and other local services, will be left struggling to plug the gap.

“The Government has announced no new Benefit cuts over the course of this parliament.

“However, our analysis shows that the cumulative impact of reforms already announced will continue to hit the pockets of low earning households through to 2020.

“Policy in Practice is being asked to help Local authorities to be smarter and ever more targeted about who gets what support, but their resources are limited.

“Central Government should help by taking action to lower rents, look again at the benefits freeze, and invest in work incentives under Universal Credit to ensure work pays as well as under the current system.

“Without mitigation, low income households that are already struggling will be pushed further into debt, with knock on consequences for society and the public finances.”