In recognition of International Women’s Day 2021 this blog post explores how the benefit system can do more to support women, how it has impacted women during the pandemic, and how it can be changed to create a more equal benefit system.

At the start of the pandemic there was much talk that COVID-19 would prove to be the great equalizer of our time. After all, coronavirus can affect anyone, regardless of race, religion, class or gender. Yet the opposite has happened. Whilst the virus can infect anyone, the financial repercussions have not been equally felt across our society.

Since March 2020 one in three households have lost income as a result of the pandemic, nearly two in five people who’ve been affected by mental health problems have experienced a drop in income, and Universal Credit claims have risen from 2.4 million to 5.6 million in the past year.

The numbers are striking, and women make up one of the groups most deeply affected by the pandemic.

Austerity hit women twice as hard as men before the pandemic

To compound this, there is still a huge issue around benefit take-up. Recent government figures show that over £10 billion of benefits is unclaimed each year, nearly half of which is unclaimed housing benefits (worth up to £4.2 billion). This means that over one million families are missing out on an average of £3,000 per year. The lack of benefit take-up across households has added to the adverse impact austerity measures have had on women. Even before the pandemic here was already stark gender inequality.

Forecasts assumed that the government would proceed with its planned changes to tax and benefits in the run-up to 2020, which included the full transition to Universal Credit. As we know, the pandemic has delayed many of these plans which has only served to further entrench this gender divide.

The pandemic has worsened the problems of our gendered benefit system

In March 2020 the world went through a seismic upheaval, akin to the outbreak of World War Two. In the UK, borders closed, hospitals were overrun, care homes were sealed shut, most universities converted to online teaching and homeschooling became the norm for children and parents nationwide. The impact on the economy has been severe and the government put in place certain provisions to protect UK citizens.

Unfortunately, the government’s supports did not thoroughly take into account the often complex nature of women’s lives or consider how the benefit system can do more to support women.

We know that women take on more familial caring responsibilities than men and make up 58% of all UK carers. We also know that there more women lone parents than men. This means that it is much more likely that women will be in part-time or lower paid work so they can accommodate these familial obligations.

In fact, a report on Women and the Economy from March 2020, commissioned by the House of Commons, found that 40% of all working women were in part-time roles, compared to 13% of working men. Therefore, whole swathes of women have been automatically excluded from the COVID-19 financial support schemes. Worryingly, this often includes exclusion from sick pay, meaning that women simply cannot afford to fall ill with the virus.

It is unsurprising, therefore, that more women are now entering the benefit system for the first time:

The reality is that the pandemic has pushed millions of people further into poverty, and women have formed a disproportionate number of this group. It is the design of a heavily gendered benefit system that allowed this to happen yet action can be taken to address how the benefit system can do more to support women.

When looking at the impact that Covid-19 is having on women it is important to also consider what is taking place in the privacy of the family home. The emotional labour women have done throughout the crisis has been monumental and the government’s order to stay at home put more women at risk of domestic violence than ever before.

As schools closed and home-schooling becoming the norm working parents had to juggle childcare and child education alongside their own work. Certainly, home-schooling impacted fathers and mothers the world over, however, there is substantial evidence to suggest that women have been impacted to a greater degree than their male counterparts.

A study by University College London found that women spent twice as much time on home-schooling than men. They were also considerably more likely to have given up work than fathers with children of the same age to undertake these caring responsibilities. On the whole ONS data shows that women were more likely than men to report that their well-being had been affected during the pandemic.

The order to stay home also led to a sharp rise in domestic violence. The United Nations’ report, The Shadow Pandemic: Violence against women during COVID-19, revealed how the pandemic has intensified violence against women in nearly every country, describing it quite aptly as the ‘shadow pandemic’. Exacerbating factors include security, health and money worries, cramped living conditions, isolation with abusers, movement restrictions and deserted public spaces. 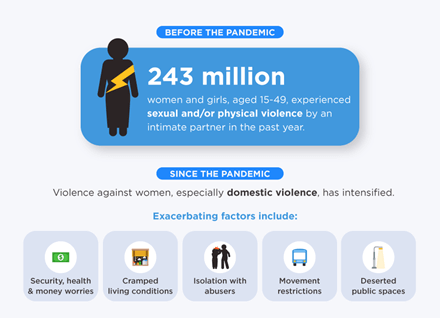 The government put a number of policies in place to safeguard all victims of domestic violence. Victims were assured they would not face any legal repercussion for leaving their homes during the lockdown; £76 million was allocated to domestic abuse and sexual violence charities; and legal aid was made more accessible. However, the rapid increase in demand on domestic abuse services and charities meant that they were still stretched to breaking point. It is likely that society will be dealing with the repercussions of this in the years to come.

We recognise that these issues are deep-rooted and challenging to tackle. However, at Policy in Practice we have conducted research into important policy changes that could benefit women and society as a whole. Here are three ways that show how the benefit system can do more to support women.

1. Budget2021’s £20 uplift for a further six months is welcome but should be permanent

Our analysis shows that the £20 uplift is a first step on the path out of poverty for many:

2. The benefit cap should be reconsidered

Astonishingly, single mothers make up 85% of all households affected by the Benefit Cap. DWP figures show that out of the 134,044 households that had support capped, single mothers accounted for 114,337 of them. Policy in Practice forecasted that benefit-capped households were set to double as a result of the Covid-19 supports, so the welcome increases in benefits were hitting a static benefit cap and not reaching the families who needed them.

3. The two-child limit should be reconsidered

Our evidence to the Work and Pensions Committee found that:

With women making up a large proportion of lone parents, this has had disastrous impacts on those households and has pushed more families further into poverty.

To find out more about Policy in Practice’s work join our free webinars: