Forget Brexit, this is the Universal Credit Parliament

More people are set to move onto Universal Credit in the next five years than in the last ten, arguably making it a bigger change that many of the electorate will see in their day to day lives than Brexit.

We were asked to speak at the launch of a new report by the Resolution Foundation, funded by the Liverpool City region. It’s the first to focus on Universal Credit in this parliament and highlights that the impact of the change does not fall evenly across the country.

Deven Ghelani joined Steve Rotherham, Mayor of Liverpool City Region, alongside Kayley Hignell, Citizen’s Advice and author, Laura Gardiner, on a panel to discuss the report’s findings, and consider how Universal Credit can be improved.

How much of Universal Credit’s problems come down to investment?

Each of the speakers recognised that the biggest issue low-income households face is not having enough money. Introducing Universal Credit against the backdrop of austerity hasn’t helped its reputation. The five-week wait, punitive deductions for debt and improved work incentives could all be solved by the Treasury.

However, the report highlights policy issues too, which are best brought to life by claimants themselves. Feedback on the claim process was mixed:

“It’s a lot easier than it used to be. It’s just an online form now.”

“It was very hard for me because I’m not very good at computers.”

The Resolution Foundation referenced Policy in Practice’s report on the transition to Universal Credit, which finds that a significant minority of households will be unable to meet their costs during the five-week wait:

“It’s hard. I didn’t have the money for the rent for my house. I had to tell the housing company that I had to move to a new benefit, and that’s the reason I couldn’t pay.”

“Sometimes you are starving, there’s no food. Once you start the payments then it’s fine, but when they [first] put you on it’s quite stressful … and you keep thinking how am I going to manage this … I’m all alone.”

Advance payments are available and are broadly welcomed by claimants however people did struggle to understand why they had to take out a loan, albeit interest-free, when they moved onto UC. Others pointed out that the rising cost of living was making it harder for them to make ends meet.

“It is quite similar to the amount that they used to pay me on tax credits, but everything is getting more expensive every year … rent, bills, and gas and electricity has gone so much higher.”

The impact of Universal Credit is not even

The Long and Winding Road report finds that the population mix in Liverpool City Region means that Merseysiders are worse off under UC compared to the rest of the country. 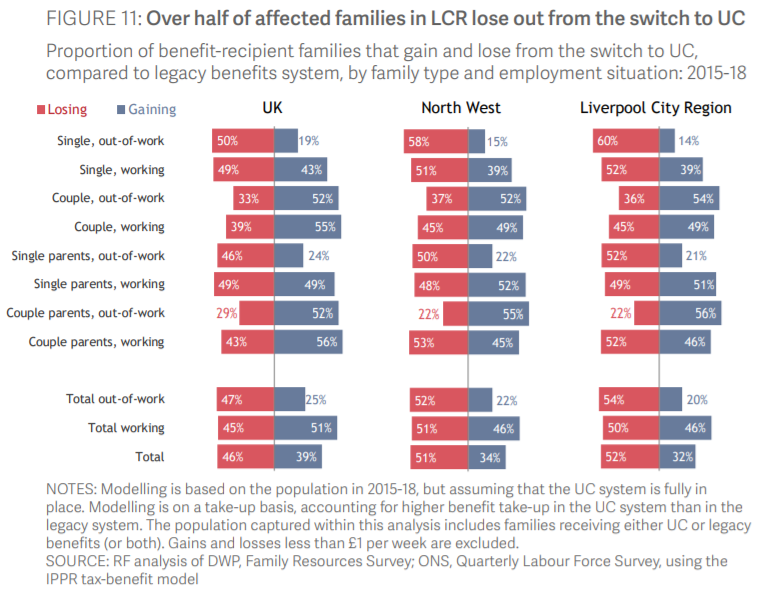 Policy in Practice helps local authorities and regions understand the impact of UC in their area by analysing household level data.

What can councils do to ease the transition to Universal Credit?

A big part of the Q&A at the end of the event focused on the practical steps government and councils might take to provide effective support.

The report helps to remind us all that this parliament isn’t just about Brexit, and Universal Credit still has a long way to go with over three million households yet to move onto the new benefit. The core recommendations are to central government, recognising as Steve puts it, the ‘double whammy’ of poorer regions worse off under Universal Credit, with councils hardest hit too.

Locally, the report calls on the Liverpool City Region, and presumably other councils to:

Policy in Practice welcomes this report. We have long argued that you can’t rely on rules of thumb to determine who gains and who loses from Universal Credit, the interactions are too complex, as the above chart makes clear.

We help councils to model the combined impact of reforms, including the inflationary effects of Brexit and Universal Credit, on each individual household, helping them to target support proactively to residents that need help the most.

Our new analysis, supported by the Joseph Rowntree Foundation, identifies 7 factors that determine a household’s ability to cope with the transition to Universal Credit. 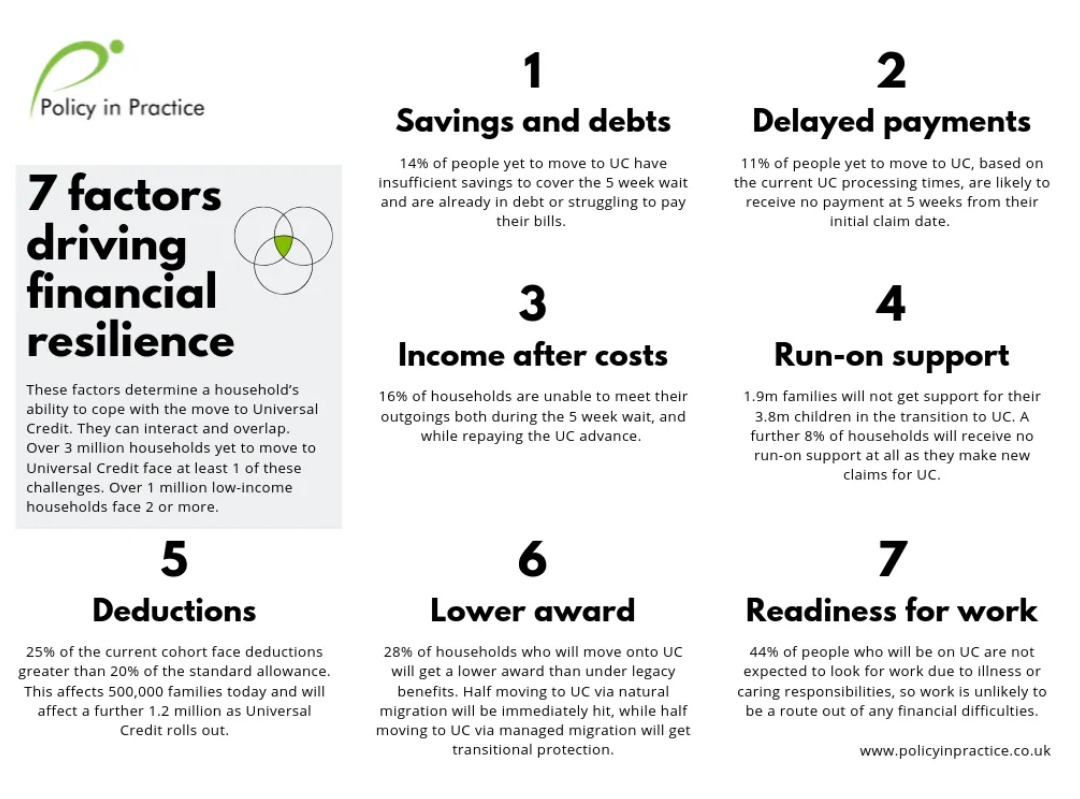 We give 4 recommendations that Government should adopt now. In the video below we show how it is possible for the DWP to identify these pressure points now in order to proactively prevent hardship and ease the transition to Universal Credit.

We therefore recommend that as a matter of priority the Government should now introduce:

To view evidence, reports and blog posts on our analysis of the impact of Universal Credit policies read our policy page.