In yesterday’s Autumn Budget the Chancellor announced the first permanent increase in support for working households in receipt of Universal Credit since 2018.

Policy in Practice welcomes the long called-for 8p per pound increase in the amount people can keep for every pound that they earn, as well as the 6.6% increase to the National Living Wage. But lowering the effective tax rate supports higher earners more, and often does not fully offset the loss of the £20/week uplift.

However, with no additional support for the 3.5m people claiming Universal Credit that are out-of-work or the 2M still in receipt of means-tested legacy benefits (excluding Tax Credits), five million households will continue to struggle as the cost of living increases in the coming months.

There were several other welcome announcements made today with additional funding announced for Family Hubs, further support for free childcare and a real-terms increase in funding for local authorities. Yet, after a decade of cuts to local government and the social security system, questions remain over the adequacy of the increased funding.

Increased support for working households in receipt of Universal Credit

The Chancellor’s decision to reduce the Universal Credit taper rate from 63% to 55% will begin to support those in work in the coming weeks. While almost every announcement will not come into effect until at least the next financial year, the digital architecture that underpins Universal Credit allows for an almost immediate policy change.

Estimated to cost £2.2bn in the next financial year, the 2.3m people in work and in receipt of Universal Credit will retain an additional 8p for every £1 earned. While the headline rates imply that people will keep an additional 8p in every pound that they earn, rising from 37p to 45p it isn’t quite as clear cut. Because of the way Universal Credit interacts with tax and national insurance, the increase is 5p in the pound for people earning about the income tax allowance of £12,570 per year, with the amount they keep rising from 25p to 30p for each additional pound earned.

The case study below shows that in April 2022 a full time worker on the increased National Living Wage will be better off by £45/month compared to September 2021. 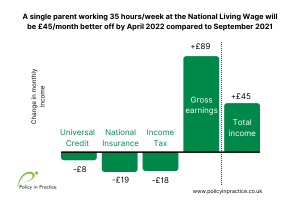 Even with an improved taper rate and Work Allowance, working families will still be squeezed this winter

Also announced yesterday was a £500/annum increase to the Work Allowance within Universal Credit. While this might look to bolster the incomes of in-work households with children or Limited Capability for Work by £41.66 per month (representing an estimated 12-14% of total Universal Credit households), the interaction with the reduced taper rate results in no extra support for these households compared to similar households who do not benefit from a Work Allowance.

The cost of living, as measured by CPI inflation, is set to peak at 4.4% in the second quarter of 2022 (averaging 4% over the full 2022/23 year). However, headline inflation figures can mask the pressures faced by groups whose spending patterns fall outside the norm: such as the estimated 15 million families protected by the energy price cap (which increased by 12% this month and is expected to increase further at its next review in April 2022). These increases will put greater pressure on larger households, and many households will see their essential costs rise by a greater amount than their income. 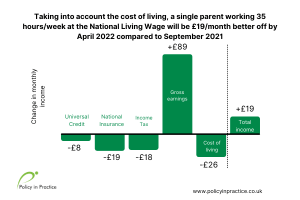 While the lower taper rate helps those who are on Universal Credit with relatively higher earnings, many households on Universal Credit are not expected to work full-time and so are unlikely to find their take home income higher than in September 2021.

The £20/week Universal Credit uplift, which bolstered the income of households in receipt of Universal Credit during the pandemic, was scrapped last month. With the reduced taper rate, a household must earn £1,083/month to make up for this loss. This is not possible for many households, particularly for those with young children or caring responsibilities. 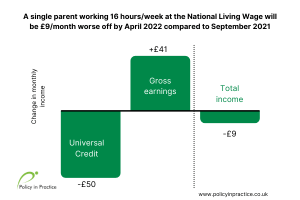 While the support package announced today is good for low-income households in work, no such package was offered to the 3.5m out-of-work people also in receipt of Universal Credit. This translates to an estimated 2.9m households with the main claimant and/or partner out-of-work – some of these households will lose as much as £912.08 in April 2022 once uprating has been applied, compared to only a few months ago. In fact, the estimated £2.2bn annual cost of reducing the taper and increasing the Work Allowance is only about a third of the £6bn cost of continuing the uplift.

Legacy benefits were entirely ignored in the Budget, meaning that 2m households in receipt of Housing Benefit, Jobseeker’s Allowance, Employment and Support Allowance and Income Support are once again not being given support to meet the rising cost of living. Additionally, as Universal Credit does not have premiums for disabilities, many of these out-of-work households still claiming legacy benefits would be worse off should they choose to migrate. 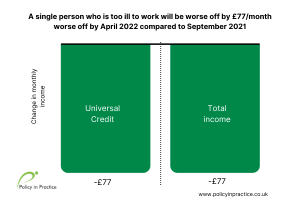 In-work legacy benefits were also ignored. While those in receipt of Tax Credits were supported during the pandemic, the Chancellor chose not to replicate the reduced taper in the legacy system. This implies that up to 1.4m working households still claiming Tax Credits will be better off should they choose to migrate to Universal Credit. We recommend that all households considering moving to Universal Credit carry out a benefits check beforehand. You can do this using our free Benefit and Budgeting Calculator here.

As part of our ongoing work with Trust for London, Policy in Practice will be analysing the impact of the Budget announcements on a sample of 65,000 Universal Credit households from London. Preliminary analysis finds that the budget changes do not offset the loss of the £20/week uplift for any cohort, other than those in full time work.

Using administrative benefits data, Policy in Practice has modelled the Chancellor’s announcements and compared average monthly take home income of Universal Credit households in April 2022 to a scenario in which the uplift was retained. 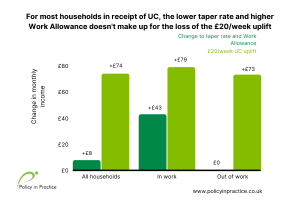 The analysis finds that households in receipt of Universal Credit are on average only £8/month better off as a direct result of the Budget announcements. This is £66/month less than had the uplift been retained. Even in work households are overall £36/month worse off with these measures in comparison to the uplift, this is because many people on Universal Credit are working part time. Only households earning above £1000/month are better off as a result of the Budget.

Out-of-work households are not supported by the reduced taper rate or higher Work Allowance, meaning these households are £73/month worse off than with the uplift retained. Note that this is less than the value of the uplift due to benefits being uprated by CPI next year, and many households interacting with the Benefit Cap. 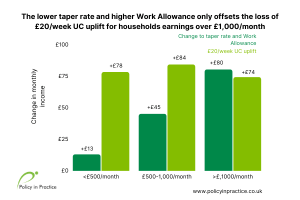 While the Chancellor did not replace the uplift in his speech, he did restate that £0.5bn is available for discretionary assistance via the Household Support Fund (HSF). The HSF follows the additional discretionary pots provided to Local Authorities during the pandemic. The DWP have previously announced that they will continue to share more data with Local Authorities, allowing teams to proactively target support to those most in need.

Local Authorities can also make use of our Low Income Family Tracker, which utilises administrative Housing Benefit and Council Tax Reduction data to identify those in the deepest financial hardship, with multiple arrears or impacted by welfare reform. This enables Local Authorities to proactively support those most in need.

Yet not all discretionary pots are treated equally. Last year’s (2020/21) DHP funding for England and Wales was £179.5 million; this year it has fallen to £140 million. Analysis by Policy in Practice finds that on average local authorities are facing a 22% decrease in their DHP funding.

The additional funding announced for Local Authorities today is not only welcome, but essential. Local authorities are responsible for the critical support for a growing number of people who are at or nearing destitution.

A real-terms increase of £1.6bn annually, or £4.8bn over three years, and a three year settlement enables local authorities to plan ahead (details of the proposed allocation will be set out in the Local Government Finance Settlement, expected in February 2022). The additional funding includes a £200 million boost to the Supporting Families programme. But after a decade of reduced spending power, this new funding will not return Local Authority budgets to anything like 2010 levels.

Today’s budget announcements will impact Local Authorities in another way if we take into account the impact of the new UC taper on Council Tax Reduction costs. Currently, after the Work Allowance, for every £1 earned, CTRS is reduced by 7.4p. This will increase to 9p as the withdrawal rate falls to 55%. For example, a household earning £400 over the Work Allowance will see their CTRS award reduced by £6.40/month less in CTRS. These changes in the budget should therefore reduce the cost of CTRS for those UC households in work, approximately one-third of the UC caseload.

This means that while a working household is worse off in terms of CTRS entitlement as a result of reduction in UC taper, they are still better off overall in terms of take home income.

With greater investment in public services, social security should have been bolstered

Yesterday’s Budget announcement will make a difference for a lot of working households on lower incomes.

Yet given the Chancellor’s push towards greater spending post pandemic, far more could and should have been done to support all those with low incomes.

Social Security will continue to be an important topic throughout this parliament.