What choices do self-employed people have with Universal Credit?

Policy in Practice has recently concluded Phase Two of the Low-income Londoners and Welfare Reform project. Funded by Trust for London, this work pools Housing Benefit and Council Tax Support data across different London Boroughs, in order to track how the income, employment and housing circumstances of over three quarters of a million low-income Londoners change over two years.

This blog post looks at a sub-group of low-income people who face much uncertainty as the result of welfare reform, the self-employed. We’ll shortly be publishing further findings from Phase Two, this time on the impact of the benefit cap on Londoner’s employment outcomes.

Using administrative data for this type of analysis is important because survey data typically used to assess the impact of policies such as Universal Credit holds too small a sample for it to be truly representative of a sub group of households such as the self-employed on low-income (only 600 records in the Family Resources Survey). Instead, the sheer scale of benefits data we collected allows us to maintain a large enough sample size for our findings to be statistically significant.

Self-employment is a popular option for low-income Londoners

Benefits data collected on a monthly basis since January 2016 shows that a high proportion of Londoners on low incomes choose self-employment. One in ten working-age households report earnings from self-employment, making up a quarter of all households in work. This is a much higher proportion than in the rest of the country.

More than half of self-employed people are couples with children (51%) and they are more likely to live in the private rented sector, compared to the rest of the working-age cohort. They earn 20% less than other households in work, with reported lower monthly earnings of £672.47 vs £840.79.

The borough-by-borough distribution of low-income households in self-employment shows how outer boroughs, in particular in North West London, have the highest concentration of self-employed workers on low incomes. Harrow, Barnet and Ealing are the boroughs with the highest proportion, reaching up to 15%. 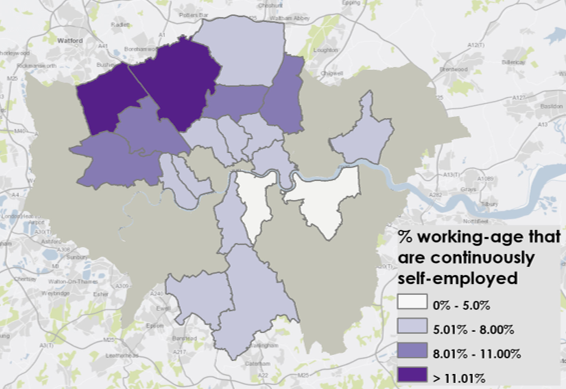 Harrow, Barnet and Ealing have the highest proportion of self-employed workers on low incomes in London

The longitudinal analysis of this data allows us to track how households’ income and earnings have changed over the course of 18 months. In this way, we can compare the extent to which fluctuations in earnings among self-employed households differ from those of employed families. 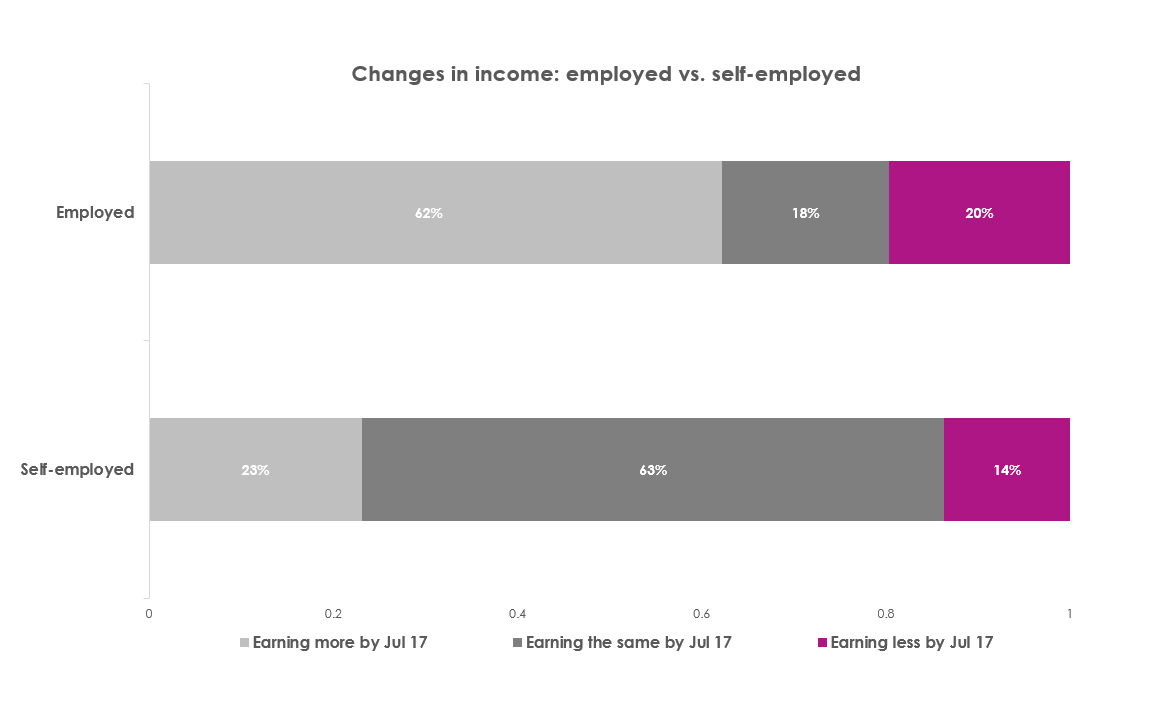 Wage growth alone, however, does not provide a comprehensive enough insight into how living standards have changed. In a city like London, living costs, and rent in particular, must be accounted for in an accurate analysis of living standards.

We identify two key drivers behind this trend:

At this stage it is important to notice how the gap in earnings discussed so far is compensated by the means-testing applied to most in-work benefits under the Tax Credits system. Through this mechanism, the income and living standards of self-employed households who report lower earnings are mitigated by higher support from Housing Benefit and Tax Credits. The roll-out of Universal Credit will change the rules for many self-employed people. In the next section we explore what the effect of this is likely to be in London.

Universal Credit introduces the Minimum Income Floor (MIF) a new way to treat earnings from self-employment for the purposes of calculating benefit.

The MIF sets a notional earning threshold for self-employed households against which their Universal Credit entitlement is then assessed. The amount of the MIF is broadly equivalent to the national minimum wage for each hour that the claimant is expected to work.

For UC purposes, if the earned income from self-employment amounts to less than the MIF, the claimant is treated as having earned income equal to the MIF. While the current benefits rules compensate for reported earnings below the national minimum wage through Tax Credits and/or Housing Benefit, under Universal Credit this happens only up to a certain threshold, set at the National Living Wage.

In London, 78% of self-employed households on low-incomes will be £344 worse off under Universal Credit.

91% of self-employed households currently report earnings below the MIF. 78% have been reporting earnings from self-employment for 13 months or more, and would thus be affected by the MIF should UC be rolled out today in their borough. The average gap between their level of earnings and the MIF threshold is £845 p/m, the equivalent of an additional 26 hours per week, at the hourly rate of £7.50 (NLW).

Self-employed households are clearly among the most heavily impacted by the new rules introduced through Universal Credit. If the minimum income floor were fully rolled out across the capital today, the impact on benefit income would be significant. Self-employed households would receive £344 per month (£4,128 per year) less under Universal Credit, compared to Tax Credits.

Ahead of these changes, it is key for local authorities to ensure all potentially affected households are aware of how the new system will impact on their finances. Policy in Practice’s modelling capabilities, applied to detailed household-level information, allows every local authority in the country to do that.

Is self-employment really a choice?

The policy intent behind the introduction of the MIF is to reduce the number of people who do not progress from low earning activity and who participate in activities that are not self-sufficient in the long term, according to the DWP . The argument is that those who opt for self-employment as their work choice, but struggle to make end meets after one year of activity, should not see their income subsidised by the public purse through benefit entitlements, and should instead reconsider their employment choices.

Policy in Practice has argued in front of the Work and Pensions Select Committee that it is hard to oppose the Minimum Income Floor and for the Minimum Wage at the same time. Anecdotal feedback from local authorities suggests that under-reporting of income is more common among self-employed people than among people in PAYE employment. There are also currently high profile cases where the use of self-employed ‘agents’ by delivery companies is being used to evade minimum wage legislation and distort competition, all of which build the case for the Minium Income Floor.

While these arguments are grounded in the principle of fairness both for the taxpayer and the competition, the reality behind people’s employment choices is more nuanced. In the context of a dynamic labour market:

Government, parliament and the judicial system are aware of these challenges. The definition of workers in the gig-economy is being investigated by parliament, and challenged through the courts. The grace-period for self-employed people to reach the Minimum Income Floor means that, while some argue it needs to be longer than 12 months, it need not be a barrier to gainful self-employment. Yet, the Minimum Income Floor is seen as a blunt measure, which fails to account for the specific circumstances of self-employed households on low-income and the various factors driving their employment choices.

Further research to understand the impact of the Minimum Income Floor on the choices made by self-employed households as the policy rolls out should be used to guide policy-makers.

Specifically, analysis should track whether:

Causal analysis using the longitudinal administrative data model that Policy in Practice has developed can help to determine whether the policy delivers on its objectives, providing the evidence base for the government to revisit the definition of self-employment, and the quality and type of support available to affected individuals. The richness of Universal Credit data also offers a unique opportunity to understand the impact of this and other policies.

A unique approach to the study of social policy outcomes

The findings outlined here follow the second round of analysis from our Low-income Londoners and Welfare Reform project. Together with previously published analysis on the impact of the benefit cap in London we have demonstrated the power of using administrative data to understand social policy outcomes, and better support people:

Policy in Practice’s unique modelling capabilities can forecast what the combined impact of future policy changes can be on each individual household included in the sample. Armed with this information, policy makers can determine how best to support residents, and provide mitigating support to those households likely to lose out from a particular policy.

We hope this leads to better strategic decisions and operational action.

If you are a London Borough and would like to be involved in the final phase of this fully funded project please email giovanni@policyinpractice.co.uk as soon as possible.