A new Living Standards Index for London tracks the financial security of 550,000 low-income families to reveal the pockets of poverty in our nation’s capital. Policy in Practice, the socially-minded software company behind the nation’s leading benefits calculator, has built the tool using data drawn from 18 London councils. The latest findings, released today, show that 1 in 7 (15%) of the London low-income families studied can’t pay the bills. The tool makes it possible for anyone to analyse one of the largest data samples about low-income Londoners which will be regularly updated with new information.

Policy in Practice Director Deven Ghelani says his firm found a concerning rise in the number of cash-strapped households in the last two years. Using data from 18 participating councils, analysts were able to track the soaring financial insecurity of low-income households on a monthly basis and forecast their living standards into the future given rising rents, frozen benefits and comprehensive Universal Credit rollout.

“The data we’ve brought together through our London Living Standards Index shows what a lot of councils and community organisations have been saying: rising living costs and frozen benefits have combined to push more families into real hardship – where they simply don’t have enough money to pay the bills each week.

“This Index allows service providers and charities to see what low income families are experiencing in their area, and to see the pockets of need that are currently below their radars.”

“Too many families facing a cash shortfall are one bill away from being evicted or running into dangerous debt. This is a wake-up call for councils and housing providers.”

Mr Ghelani says the index will be useful for London-based volunteers, charities, change campaigners, as well as London’s councils.

“Our leaders should harness this information to drive how they spend resources to reach those families in most need and prevent shortfalls from leading to hardship or homelessness. If the trends we’ve identified continue, London is going to see an extra 157,000 families at the end of their financial tether by 2021, putting strain on support resources, local authorities and charities.”

Deven Ghelani says many of the 18 councils involved in the project, which is funded by the Trust for London, are already using the Index and its tracker tools to better target support to families in need. He says more councils should get on board with sharing and using data to target and support families in need, given the benefits freeze and the impending rollout of Universal Credit.

Londoners themselves can also use Policy in Practice’s award-winning Benefit and Budgeting Calculator to get a free and anonymous personalised assessment of support they may be eligible for. 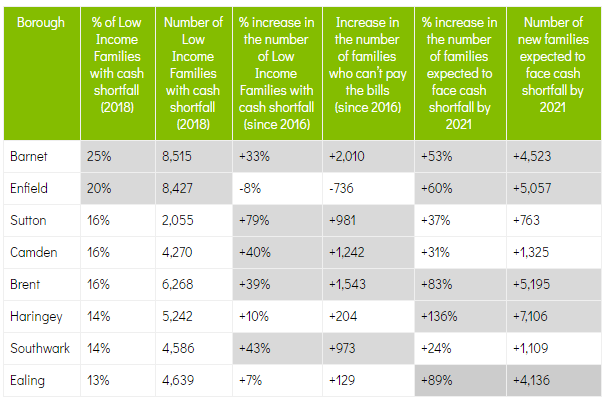