Benefit Cap: Policy in Practice’s evidence to the Work and Pensions Select Committee 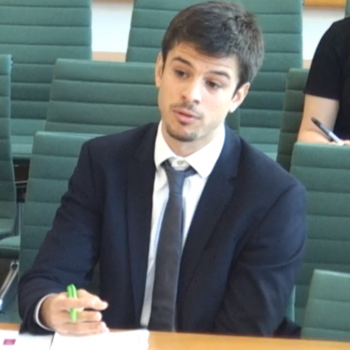 Giovanni Tonutti, Policy in Practice, gave evidence to the Work and Pensions Select Committee on the impact of the Benefit Cap

Policy in Practice gave evidence to the Work and Pensions Select committee today about the impact of the lower benefit cap. This article summarises some of the key points presented before MPs, based on our experience of supporting local welfare providers on the front line.

The lower benefit cap was introduced in November 2016 and limits the total amount of benefits a household can receive to a maximum of £20,000 a year (£23,000 for families living in Greater London). The aim of this measure is to improve work incentives for benefit claimants, while reducing public expenditure on welfare support and increasing the overall fairness of the system.

Since the roll out of the lower benefit cap, Policy in Practice has worked with over 50 local authorities to help them assess the impact that this policy and other welfare reforms have had on their low-income residents. Our approach involves the analysis of Housing Benefit and Council Tax Support data to track how the living standards of households affected by this policy have changed over time.

Read news release: New research: one in two people are failing to escape the benefit cap

The dynamic effects of the cap

Our previous analysis on the dynamic effects of the benefit cap in London examined the impact of the policy on the employment outcomes and living standards of families affected after six months from its full roll out. In July 2017, close to half of the 11,413 households capped in February had escaped the cap. Of these, 37% managed to do so by moving into work or by increasing their hours worked. A further 29% were no longer capped after moving property, and a remaining 28% were no longer present in our sample (thus either relocating outside of London, moving off benefits completely or starting to claim Universal Credit). 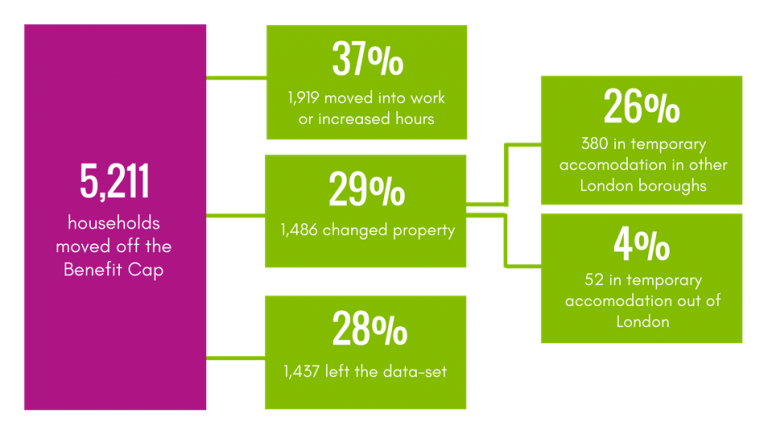 The dynamic effect of the benefit cap

The analysis went further to investigate the causal link between the introduction of this policy and changes in the employment outcomes of households affected. The method we used involved sampling two groups: the treatment and control groups. The analysis looked at changes in employment rates among those families affected by the cap before and after the introduction of the policy (the treatment group), and compared this with households with similar demographic characteristics not subject to the cap (control group). We found that families in the treatment group (and thus affected by the cap) are 21% more likely to move into work than those in the control group.

Within our cohort of 11,413 capped Londoners, this means that of the 1,919 low-income Londoners who between February 2017 and July 2017 escaped the cap by moving into employment, 21% did so as the result of the effect of the cap alone. This amounts to 403 households and 967 children.

Households ‘stuck’ on the cap

We were asked by one of our local authority clients to look at households that were ‘stuck’ on the benefit cap and the under-occupation charge. We were able to analyse this for councils across London as part of our pan-London analysis on the impact of welfare reforms, backed by Trust for London.

We found that for every claimant who managed to move off the cap, there is more than one household who is stuck on the cap for six months or longer. 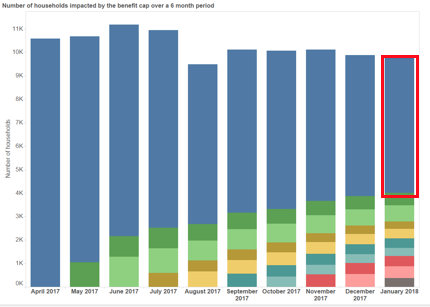 Compared to the cohort who moved into employment, the group of ‘stuck’ households are disproportionately made up of single households (25% vs 9% among those who moved into work), and by ESA claimants (15% vs 8%). Single claimants on ESA appear to be a group who are particularly unresponsive to the work incentives introduced by the cap and need extra support.

For many of these ‘stuck’ households, the reduction in benefit support resulting from the cap means a significant deterioration in their living standards. Two thirds of these households are likely to be facing a cash shortfall between their monthly income and estimated costs, against only 20% among all other working age housing benefits claimant in the sample. The average gap between their rent and housing benefit is £72 per week, or £3,750 per year.

This evidence is consolidated further by the findings of analysis carried out on a sample of council tenants across 11 local authorities in England. When comparing different levels of rent arrears, it emerges that capped tenants are two thirds more likely to be in rent arrears than all other tenants claiming housing benefits. 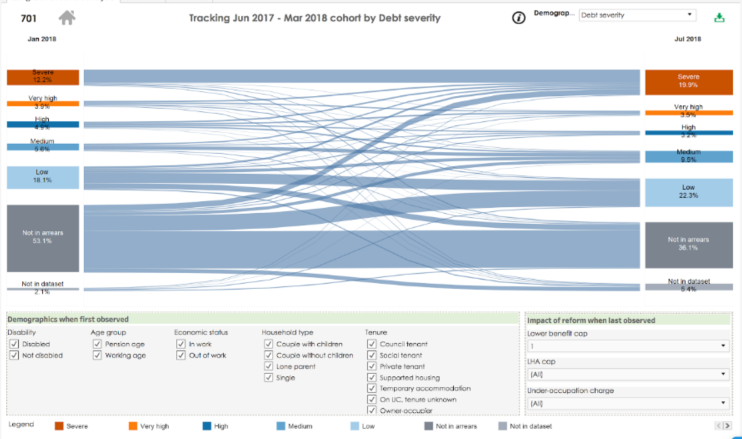 Discretionary Housing Payments are a common financial support instrument that local authorities use to target help to capped households. Our national analysis across 11 local authorities in England, shows that 28% of all households currently affected by the cap are in receipt of a DHP. The DWP should commission further analysis to assess the effectiveness and long term sustainability of DHPs for those claimants.

The response by local authorities

Local authorities have played a key role in providing support to their most vulnerable residents before and after the policy was introduced. In our work with dozens of local authorities on the front line, we have witnessed a number of success stories in the way the roll out of the benefit cap was met by smart and effective data led support strategies.

The London Borough of Croydon established a benefit cap task force to carry out preventative work ahead of the roll out of the policy. Supported by Policy in Practice analysis, the council was able to segment the cohort of households affected into six target groups and target support accordingly. Within a month from the roll out of the cap, 70 households moved off the cap, of which 31 moved into or progressed further into employment.

In Greenwich, the Greenwich Local Labour and Business initiative has offered short term job contracts in the council to capped households. In this way, not only are these residents able to move off the cap, but are actively re-inserted by the council into the labour market.

These and other examples of successful initiatives are based on councils’ ability to access information on their most vulnerable claimants, mostly through Housing benefit and Council Tax Support data.

Policy in Practice’s view: The benefit cap should be combined with effective support for all claimants, and give further exemptions where work is some way off

The evidence collected so far shows that the benefit cap has been successful in generating the behavioural responses that the policy set out to achieve. Compared to a control group, households affected by the benefit cap are 21% more likely to move into work, and the reduction in support available has led to some families moving into cheaper accommodation, thus finding a sustainable solution to offset any benefit loss. Yet, these responses are observed in less than half of the cases of families affected by this policy.

The majority of capped households showed no change in their circumstances other than a significant worsening of their living standards following the introduction of the benefit cap. This is reflected in increasing levels of arrears, higher demand for local support, including DHPs. It is unlikely that the benefits of this policy, both in terms of the savings generated and the positive impacts on employment outcomes, have offset the financial costs, or crucially, the human and social costs associated with rising levels of economic destitution.

For every child whose parents have successfully moved into work as the result of the cap, eight more children will grow up in families whose financial circumstances have worsened following the introduction of this policy.

Ultimately however, this is a question for Ministers to consider. Through our analysis we have shown that it is possible to understand who has benefited from this policy and identify those who struggle, so that they can be offered additional support to help move towards independence. It is critical that the DWP work closely with local councils to ensure that this targeted support is available under Universal Credit.

“This policy has always been meant to have a positive impact on those families moving into work. However, our analysis shows that the positive employment outcomes and savings generated do not appear to offset the financial costs, or crucially, the human and social costs associated with rising levels of economic destitution.”

While recognising some of the achievements of the policy to date, we call on the committee to review the exemption criteria of the cap and to consider extending them to all households claiming ESA and to lone parents with children under the age of 3.

Further, in acknowledging the key role played by local authorities in supporting their most vulnerable residents, we urge the Government and Parliament to consider how to share Universal Credit data between the DWP and local councils across the UK.