Why a focus on tackling pensioner poverty is now needed

Pensioner poverty is on the rise as the cost of living crisis grips the country. We look at trends in pensioners’ income, the low take-up of Pension Credit, and the financial gains achieved by local authorities that are proactively supporting pensioners.

The emergence of pensioner poverty

For many years the focus of organisations supporting people with the lowest incomes has been directed towards working-age households. This focus was driven by austerity measures, introduced by the 2010 coalition government, that mainly affected benefit support levels of working-age households. Pensioners were relatively protected against cost-saving measures.

Pensioner poverty has been held back by the protection of the triple lock mechanism which ensured that pension income increased by 2.5%, average wage growth or inflation, whichever is higher. This is in addition to regulatory protections such as maintaining Council Tax support at up to 100% for those of pension age.

These measures to protect pensioners came on top of more than a decade of rising pensioner income. The government’s statistical analysis showed a significant increase in the average weekly gross income of all pensioners from £300 in 1994/95 to £508 in 2009/10 (in 2015/16 prices). This growth in pensioner income reflected higher income from benefits, including the state pension, as well as increased income from occupational pensions.

The steady rise in pension income ended in 2009/10 when it flattened after the financial crisis that began in 2008, but the state pension was protected through the triple lock mechanism which was introduced in 2010.

Today, the median state pension remains at between £150.25 and £178.52 a week which equates to about 25% of average earnings and about half the income of those on the minimum wage.

Breaking the triple lock brings a rise in pensioner poverty

The current cost of living crisis will have an impact across all age groups meaning that organisations supporting people struggling to make ends meet will be increasingly called upon to support pension age households too.

The crisis is driven by inflation, a higher tax burden and unprecedented increases in energy costs. The impact on households with a low income will be significant. The independent Office for Budget Responsibility (OBR) states that the UK is facing “the biggest fall in living standards in any single financial year since ONS records began in 1956-57.”

In April 2022 average household energy bills are expected to rise from £1,277 to £1,971 and are then expected to rise again in the Autumn to about £3,000 a year, due to an expected revision of the energy cap. Alongside spiraling energy costs, inflation (RPI) has risen to just over 8% and continues to rise, a 1.25 percentage point rise in National Insurance contributions has been introduced, and Council Tax has risen by just under 4%, all this year.

Even before the cost of living crisis, some 2.1 million pensioners live in poverty, a figure that is now expected to rise significantly. The triple lock protecting pension incomes was suspended for a year from April 2022 to temporarily break the link with earnings. This measure was introduced because the recovery from the pandemic saw an increase in earnings of over 7% in the preceding year and the government believes that pension increases of this level would be unaffordable in the current economic climate.

As a result, in April 2022 state pensions increased by the level of inflation that had existed in September 2021 (3.1%). This is below today’s inflation rate of 8%, and significantly lower than energy price increases.

The cost of living crisis affects some pensioners more than others

Although the cost of living crisis, together with benefit support levels set at a rate lower than inflation, risks financial crisis across the age range, pensioner households are likely to be particularly at risk. This is because they spend a higher proportion of their income on heating and food than working-age households – items for which prices are rising the fastest.

Even so, the crisis will not have a uniform impact across all pensioners. As with working-age households, those on lower incomes spend proportionally more on food and fuel. The IFS points out that lower-income households spend almost three times as much of their budgets on gas and electricity as those with the highest incomes (11% versus 4%) which means that low-income pensioners are likely to be significantly affected.

The cost of living crisis, taken together with a below-inflation rise in state pensions, means that many low-income pension households will struggle to meet outgoings. A recent survey of pension age households by Age UK showed:

The government’s response is welcome but insufficient

The government has responded to the cost of living crisis by introducing a £9 billion package of support for people on the lowest incomes. This includes measures to be administered by local councils including a £150 Council Tax (CT) rebate for households in property bands A to D, discretionary support for those in higher Council Tax bands, and an extra £500 million boost to the Household Support Fund (HSF) to provide discretionary help.

The guidance for administering the HSF specifically mentions support to those of pension-age for the first time with a third of the fund intended as emergency support for this age group.

Whilst welcome, these measures are unlikely to be enough to fully support low-income pensioner households who face real terms income reductions of about £388 a year.

A recent House of Commons debate highlighted that many pensioners remain in family properties, with associated higher costs, once the family has left home. Many of these properties will be in Council Tax bands E and above and therefore excluded from the CT rebate.

In addition, local authorities administering the Household Support Fund have limited visibility over low-income pensioners who are not eligible for Pension Credit, Housing Benefit or Council Tax Support. Given this limited support from central government, it falls to support organisations such as local authorities to ensure that low-income pensioners’ income is maximised and they claim all the help available to them.

Pension Credit is the main means-tested benefit for pension age households and it tops-up pension-age income to a guaranteed minimum level. It is, however historically underclaimed.

The government’s own benefit take-up figures show that up to 850,000 families who are entitled to this support have not claimed it. Around £1.7 billion of available Pension Credit is unclaimed in the financial year 2019-2020, which is worth around £1,700 per household each year.

As well as an important source of additional income in its own right, Pension Credit also provides a passport to further support such as:

The government launched a take-up campaign in April 2022 [12] to encourage greater take up of Pension Credit. This campaign aims to tackle some of the myths surrounding Pension Credit take up such as how having savings, a pension or owning a home are not necessarily barriers to claiming the support.

Policy in Practice supports the role that councils play in tackling pensioner poverty by maximising the income of low-income pension-age residents. We work with leading local authorities who use their data to proactively identify households at risk of poverty, target support to them, and track change over time.

Other councils can also encourage the take up of Pension Credit for pensioners who claim Housing Benefit or council tax support.

Policy in Practice runs one of the benefit calculators on GOV.UK and works with over forty local authorities, carrying out analytics on their benefits administration data on a monthly basis.

We help local authorities to analyse their Housing Benefit and/or Council Tax Support data via a LIFT platform to see, from the claim type, whether households are already receiving Pension Credit. In addition to tackling pensioner poverty, other targeted campaigns to encourage the take up of £15 billion of unclaimed benefits have been successfully carried out.

LIFT allows councils to filter their data to identify pension age households who are eligible for Pension Credit if their income meets the eligibility criteria and they are not already receiving it. They then simply download the list of households identified and target them in locally run Pension Credit take-up campaigns. 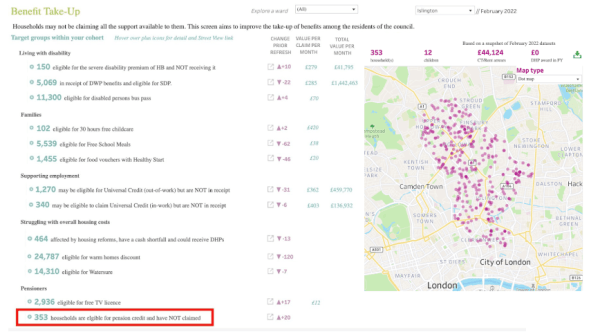 In addition, 16 people in the target group were carers. We estimate that, by building the financial strength of these carer households, the council will avoid an estimated extra cost of £209,606, based on avoiding a year of residential care. This is in addition to an estimated extra £461,132 of savings expected from remaining carer households within the target group.

When additional benefit take-up and the impact on lower residential care costs are factored in, the overall economic and fiscal benefits in Islington over five years is expected to reach over £6 million. A similar campaign across Kent has so far delivered an economic benefit of £500,000 within six months.