Ten years of benefit cuts: worth the price?

It’s astounding that there has been little to no coverage of the impact of benefit cuts in this election. Even in a campaign dominated by Brexit, the effect of austerity and almost a decade of benefit cuts, many of which are electorally popular, are having a huge impact on people who vote.

Throughout this election campaign there has been little to no electoral price to pay for benefit cuts. Yet these cuts are a large part of the reason why well-intended reforms like Universal Credit have struggled. As voters head to the polls this week a new paper by the University of Warwick seeks to put benefit cuts back on the agenda.

I think the paper is important because it challenges the government on their own terms. Chancellor George Osborne argued that the savings generated as a result of benefit cuts were necessary, but this new paper states that:

“Importantly, we show that the policy was close to neutral from the fiscal stand-point. The direct fiscal savings to the central government for lower housing benefit payments were substantially offset by an increase in the demand for temporary accommodation.”

The paper argues that austerity hasn’t really saved much, if anything, while causing a great deal of hardship to those that have had to endure it.

“It also implies substantial reallocation of resources, since the savings were accrued by the central government, and the costs are mostly born by the local councils. Taken together, this evidence suggest that policy substantially reduced the welfare of the benefit claimants, with little-to-none implied fiscal savings.”

This has long been suspected; anecdotal evidence from Policy in Practice’s work with over 100 councils certainly points to limited savings. However, the evidence has never been able to produce a ‘smoking gun’, not least because the complex and wide range of reforms has made it difficult to establish a causal link from austerity to the knock-on increase in local authority spending required.

I read the report to see if there was anything in the methodology that local authorities could apply to better quantify the impact of welfare cuts and to share what I think a sceptical Treasury official might make of it.

“Across the whole of the UK, the projected ex-ante fiscal savings from the cut to local housing allowance were estimated to be around £400 million. Our estimates imply that the actual savings were closer to £542 million. This is offset with an overall increase in spending on council anti-homelessness measures of £259 million, implying a dramatic shifting of burden from the central government to local governments.”

Being unable to pay the rent is obviously a key driver of homelessness. The paper focuses on flaws in how rents are estimated, driving different impacts across councils. 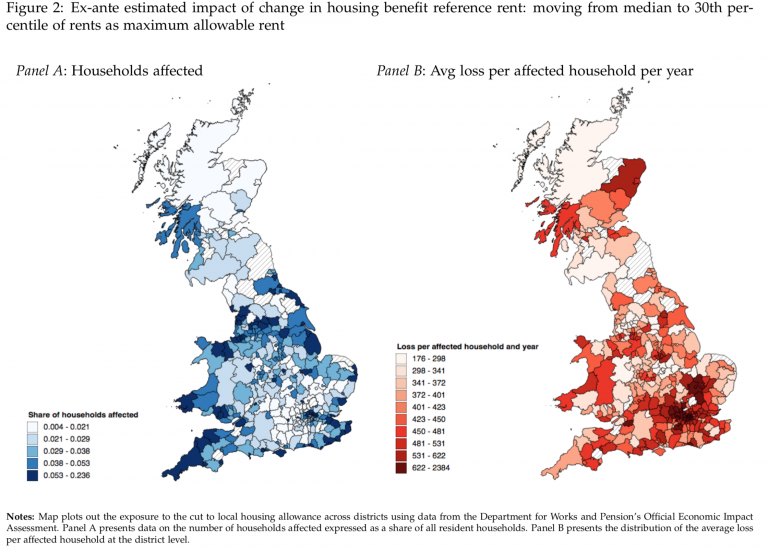 “The reference rents are empirically estimated by the Valuation Office Agency on the basis of a sample of rents submitted voluntarily by the landlords and real estate agencies. Thus, naturally, the 50th and 30th percentiles are noisy empirical estimates of the corresponding quantities along the true underlying distribution of rents. This creates the prospect that in some places the policy shock was stronger than in others, simply due to different random draws of the effective benefit cut – driven by the difference between the 50th and 30th rent percentiles.”

Isolating this shock, the authors look at the impact on a range of measured negative outcomes for tenants, which would drive increased costs for local authorities, comparing these to Housing Benefit savings.

They use the social-rented and owner-occupier sectors as ‘placebos’ or controls against which to compare outcomes for claimants in the private rented sector (PRS). In all of the above areas, they find a link between the benefit cut and worse outcomes. The only area where they don’t find a link is in employment rates – which is unsurprising as lower benefits may be compensated for by moving into work.

The number of voters impacted is staggering – benefit cuts affecting support for those in the private rented sector has affected a large number of people by a significant amount:

“It was estimated that 774,970 households would lose a part of their housing benefit – among a total case-load of 939,220 individual cases.” 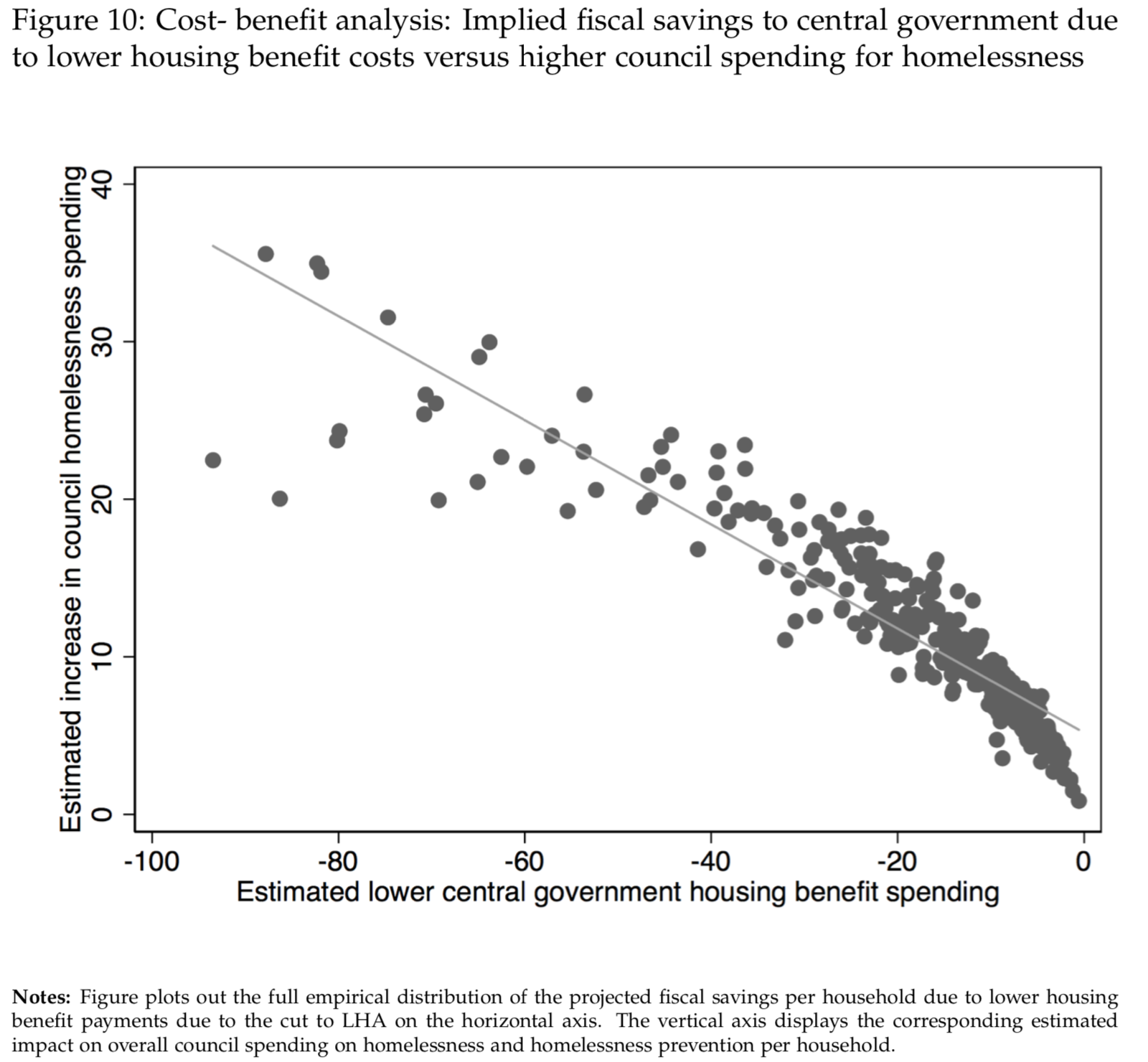 The evidence is strong, but not conclusive

A sceptical Treasury official view may find a number of holes to pick in the paper. Some of the outcome measures used are dubious, for example it would be a leap to attribute personal bankruptcies to cuts in LHA for instance.

Similarly, causality can always be challenged when using aggregated data.

“in the last three years there has been a 50% drop in the number of landlords taking people who are on benefits. It is now down to only one fifth; 22% of our landlord members whom we surveyed say they have LHA tenants, and 52% of those surveyed said they would not look at taking on benefits tenants.”

However, the authors could push back because their analysis only accounts for a fraction of the cost to the public sector. Rising direct costs, such as discretionary housing payments, are not mentioned in the paper. Lower social participation and knock-on consequences for indebtedness, mental health and wider outcomes are not accounted for but have undoubtedly been felt.

Ultimately, the paper makes a hugely important point about a flawed rationale for significant benefit cuts, whilst at the same time failing to tackle the underlying drivers of high and rising housing costs.

Instinctively and anecdotally, I agree with the thrust of the report’s findings. Much of the savings from welfare reforms appeared elsewhere and the true social costs haven’t been fully accounted for by the government.

Analysis by Policy in Practice on the benefit cap found that while people affected by the cap were 21% more likely to move into work, the cap meant that for every child whose parents move into work as a result of the cap, eight will grow up in families whose financial circumstances have worsened following the introduction of this policy.

I know how difficult it is to evidence the link between welfare reform and local authority costs given the work Policy in Practice does on the cumulative impact of welfare reforms. I believe that better use of administrative data, which the paper by Fetzo et al doesn’t use, is the key to tracking the impacts of policy.

The paper from the University of Warwick is important because it challenges one of the key drivers for welfare cuts. It asks whether the savings generated from them are worth the price paid. I don’t think it’s conclusive, but it is thorough and timely.

Before we head to the polls on Thursday, consider who will tackle high housing costs, who will think about the potential future full costs and benefits of a policy, who will introduce proper policy evaluation and help those you believe are most in need of support.

This election is about more than just Brexit, it’s about the next five years of economic and social policy. The living standards of one-quarter of the population will have a bigger impact on the UK’s future than our trading relationships with other countries.