Although high unemployment rates have been a constant throughout Spanish history, the recent economic crisis has exacerbated this issue even further. In the space of just five years, between 2007 and 2012, Spain’s unemployment rates went from a record low of 8.3% to an unprecedented 26%. This has increased the pressure on the country’s benefits system, and raised questions about how to best deal with the long-term unemployed.

In terms of implementation, both the national government and regional authorities have the power to legislate over social benefits and to oversee their delivery on the frontline. Generally, only the public pensions and unemployment systems remain centralised; whereas health and social services are largely delivered at the regional level. Furthermore, some local authorities (particularly the Basque regions) have more legislative and tax-raising powers than others. This increasingly devolved structure means that benefit recipients have to deal with a complex mosaic of support networks at different levels.

For the sake of clarity, this article will focus on two different benefits: the non-contributory unemployment support (subsidio de desempleo), at the national level; and the minimum income benefit (renta mínima garantizada, or RMI), at the regional level. These two benefits are aimed at supporting those who are unemployed, do not have access (or have exhausted their entitlement) to contributory benefits, and are at risk of poverty.

In order to receive the subsidio de desempleo, claimants generally have to be currently unemployed with at least some employment history, signed up as job seekers, and earning less than 75% of the country’s minimum salary (which for 2014/15 comes up to around €485, or £384 a month). The regional renta mínima garantizada (RMI) is more specifically aimed at those with a weak or non-existent employment background, and who are also on low incomes. This benefit must therefore be understood as a subsidy of last resort, relevant only where there are no other forms of support available to the individual.

The amounts that claimants receive from the state or their local authority vary according to their circumstances. Most subsidio claimants will be entitled to €426 (£337)/month, although there are more generous non-contributory benefits aimed at specific groups such as those who have several children, who have recently been released from prison, or who are 55 or older[2]. Those who fulfil these conditions may receive up to €708 (£560)/month from the state. Working part-time while receiving the subsidio is possible, with the amount of support being reduced proportionally to the number of hours worked. Those benefits recipients finding part-time employment may also choose to stop receiving subsidio, going back to it once their contract comes to an end.

Access to RMI, meanwhile, varies hugely from local authority to local authority. Regions are free to set their own income thresholds for claimants, which has resulted in large coverage discrepancies. For example, 3.1% of the Basque population is covered by RMI as opposed to just 0.3% in most other areas, despite the region having some of the lowest unemployment and poverty rates in Spain[3].

The generosity of RMI benefits also varies enormously. In some regions such as Madrid or La Rioja, single-person households may only receive around €380 (£300)/month; whereas more generous regions such as the Basque Country offer claimants €658 (£521)/month as well as an additional housing element of up to €320 (£253)/month. There is therefore a clear imbalance in the economic support that different regions provide to those with no access to contributory benefits.

These differences generally reflect varying costs of living – the northern regions being more expensive to live in than the southern and central ones [4] – but this contrast does not fully explain why RMI base amounts in some areas are more than double those in others. The fact is that some Spanish regions have much more generous non-contributory benefits than others. So-called ‘benefit tourism’, however, is avoided by residency tests that often require recipients to have lived in their region for 12 or 24 months prior to applying. This requirement, which has been so controversial in the UK in the case of Sandwell Council, is entirely acceptable in a very de-centralised system like Spain’s. 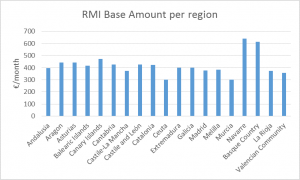 Historically, non-contributory benefits in Spain have not been subject to strict conditionality. However, this has been changing in recent years, and now the national subsidio and the regional RMIs contain similar clauses in this sense. Generally, a recipient must sign a compromiso de actividad (similar to the “Claimant Commitment” of Universal Credit or “Jobseeker’s Agreement” of the current UK benefits system) prior to receiving their benefit. This is a document establishing a set of obligations for claimants, including accepting adequate employment offers, actively looking for employment, or taking part in relevant training sessions. Since the beginning of the economic crisis, these conditionality measures have been enforced more and more strictly. This has meant that hundreds of non-contributory support recipients have lost their entitlement as a result of breaking the terms of their compromiso de actividad.

These benefits are comparable to Discretionary Housing Payments in the United Kingdom in that they are intended as temporary support measures that should help recipients move towards self-sufficiency. As such, they tend to have a fixed duration, generally of six months. After this initial period, the claimant’s situation is evaluated again; if s/he is still eligible then the benefit is extended. However, it appears that very little support is given to help subsidio and RMI recipients find other sources of income.

Moving people from benefits into work has historically been one of the greatest challenges of Spain’s welfare system. A share of the problem derives from the lack of popularity of part-time employment contracts among both trade unions and legislators [5], which makes it difficult for claimants to move into work gradually. Even with that caveat, Spain’s non-contributory benefits do not generally include great incentives to move into work.

One of the main issues when it comes to moving benefit claimants into work has to do with the high withdrawal rate of both the subsidio de desempleo and regional RMI measures. Under most schemes, finding a job that pays more than the benefit’s minimum threshold will result in the claimant losing his or her entitlement immediately. From a British perspective, this appears to make it risky for unemployed persons to bridge the gap between benefits and work.

Having said this, there are some exceptions among the Spanish autonomous communities. For example, the RMI scheme of the Balearic Islands (Renda Mínima d’Inserció) has a reduced withdrawal rate for those recipients who find employment. For six months after moving into work, a recipient’s RMI entitlement will be reduced by 50% rather than fully removed. This provides claimants with a real incentive to find employment and receive an immediate boost to their income from the very start of their contract. There is however not enough data to draw conclusions regarding the link between RMI design and unemployment in the Balearic Islands.

As an illustration, imagine that an RMI recipient in the Balearic Islands (receiving the base €417 (£330)/month) finds a job that pays €500 (£395)/month. Although this wage would theoretically put her above the RMI threshold, during the first 6 months after moving into work she will be entitled to as much RMI as if she was earning only 50% of her wage. This would make her €254 (£200)/month better off from her first day of work. Comparing this to the situation she would face in any other region shows why the Balearic Islands stand out in terms of work incentives. 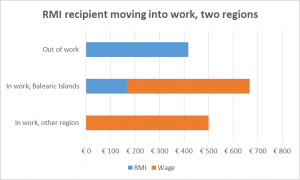 Spain’s non-contributory benefits are also lacking in terms of training. The regional RMIs and subsidio de desempleo do contain some training initiatives, but they are rarely compulsory or helpful. A recent ad hoc benefit under the name ‘Plan Prepara’ offered unemployed people up to €450 (£356)/month over 6 months in exchange for their participation in training sessions intended to help them find work. However, the training sessions have been criticised for their design and lack of funding and instructors, and only 6% of participants were able to find employment.

The general picture of non-contributory benefits in Spain is one of welfare support with a very small work component. Initiatives such as regional RMIs or the subsidio de desempleo are primarily intended as safety nets of last resort to support those at risk of exclusion. However, there appears to be very little interest in helping those people move into work, either through education, training, or economic incentives. With more and more claimants putting the Spanish welfare system under unprecedented stress, there is a clear need to rethink the design of social benefits in order to ensure that people get the support they need to move from welfare into work.