The end of the eviction ban on Monday 31 May is likely to be a significant cause for concern for local authority homelessness teams. Some are predicting a tsunami of evictions once the ban is lifted. Others predict a steady increase in homelessness applications over the next six to twelve months as Section 21 notices seeking possession begin to expire and landlords apply for possession orders.

This post explores what councils are doing to prepare for a potential rise in evictions and highlights the work of the Royal Borough of Greenwich council and Beam, guest speakers on our recent webinar. It will discuss the benefits of early intervention and how the end of the eviction ban can be seen as a significant opportunity to support residents before they reach a point of crisis.

On the ground experience

I worked in a local authority housing needs team for two years and have first-hand experience of the competing priorities of a housing needs service, the officers, and their customers.

Officers in local authority homelessness teams work under immense pressure, often acting as the intermediary between distressed customers and a service with stretched resources, anxious to comply with the statutory homelessness legislation (e.g. Part VII Housing Act 1996, Homelessness Act 2002, Homelessness Reduction Act 2017). The pandemic, and in particular the Everyone In campaign, really brought this to the fore.

Housing needs officers carried higher than normal caseloads as councils were instructed to provide accommodation to people who would have previously not been owed a duty. Officers have also had customers on their caseload for much longer periods of time as temporary and emergency accommodation placements stagnated due to a lack of available properties in the private rented sector.

Research by Policy in Practice on the interaction of Covid-19 supports and the benefit cap showed that the introduction of measures such as the increase to Local Housing Allowance (LHA) and the £20 uplift to Universal Credit, whilst welcome, hit a static benefit cap. This meant that more customers, especially in London, were now affected by the cap making it increasingly difficult for councils to move customers out of temporary accommodation and into the private rented sector.

Together with other public sector workers, housing needs officers deserve much recognition for their vital work throughout the pandemic. They dealt with the personal challenges faced by people during the pandemic at the same time as dealing with increased pressures in their working lives. They also helped to ensure that councils met their statutory duties, and more importantly, that members of the public received the housing and homelessness assistance they were owed.

In our recent webinar How councils can prepare for the end of the eviction ban Claire Tugwell, Performance, Policy and Development Manager at Royal Borough of Greenwich, gave insights into how the council’s housing inclusion service worked before and after the pandemic.

More recently, the council has adapted its housing needs service to prepare for a likely increase in caseload as a result of the end of the eviction ban.

The measures included moving the service towards a general team to support a more even distribution of the volume of cases. They now have 40 general housing officers whilst retaining specialist teams for younger and older residents.

Secondly, Claire highlighted a primary concern that customers would not ask for help until their situation was at a point of crisis. In housing terms this could be when someone has been served with a bailiff warrant or excluded from a family or friends house. In order to help combat this, and to give the council the best chance at early intervention, Claire stressed the importance of joint working with other departments and organisations. If the council can get notification from another organisation as soon as it becomes apparent that someone is experiencing difficulties at their residency, then this gives them the best chance to offer effective support.

Royal Borough of Greenwich uses a LIFT platform to identify vulnerability, as Claire explains. “We are going to continue to proactively approach people before they come to us, and the way that we do that is working with Policy in Practice. Using our data they can identify most at-risk households and, where possible, we would proactively approach them and offer support if we feel that there is something we can assist with very very early on.”

Thirdly, Greenwich Council conducted a review into their Discretionary Housing Payment (DHP) allocations last year, the objective of which was to assess where the money was currently going and where it should be going to be most effective. This is even more important due to the reduction in DHP allocations for the financial year 2021-22.

The review indicated that other support measures, such as employment support or tenancy transfers for under-occupiers, should be prioritised for people in receipt of DHPs to increase their capability to maintain their accommodation without the help of a DHP. This means the DHP budget can be spent more effectively, and help more people to avoid homelessness.

Other housing and homelessness practitioners who attended our webinar responded to a poll indicating that early intervention for private renters was their primary objective. 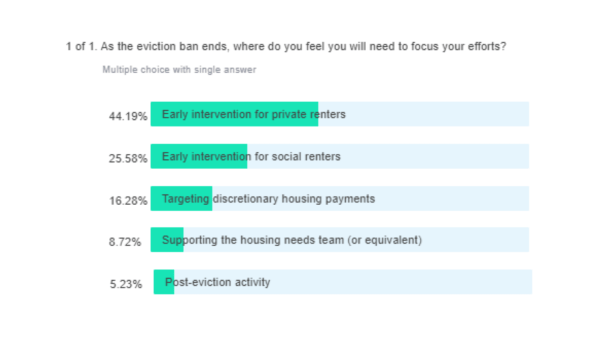 Early intervention, pre-prevention or upstream prevention are terms used frequently to describe strategies where councils pro-actively engage with residents before they reach a point of crisis where they would need to approach the council directly. Within homelessness, this could involve taking steps to help residents maintain their current living arrangements or assist them with a smooth transition into another home without the need for emergency intervention. The idea being that smaller interventions at an earlier stage help prevent residents’ circumstances from reaching a point where emergency support is required.

From a financial perspective, Crisis estimated that for every £1 invested in homelessness prevention there would be a benefit of £2.80. The cost of a homeless application is estimated at around £7,500.

Research by Policy in Practice evidencing the link between the Local Housing Allowance freeze and homelessness found that for every 1,000 households with a shortfall between their LHA rate and rent, 44 would require temporary accommodation. The National Audit Office (NAO) estimated the cost of providing temporary housing to homelessness families was around £845 million a year.

The social benefits of early intervention are also well documented. Maintaining stable accommodation is vital to help ensure positive outcomes for children early on in life. Temporary accommodation has been shown to have a detrimental impact on families’ physical and mental health.

Of course, it is easy for those sitting a convenient distance away from the front line to say that councils should direct more resources towards early intervention. However, councils must balance the recognisable benefits of prevention against the resources and capacity to effectively manage all of the approaches from residents owed a form of statutory homelessness duty.

Although there is considerable evidence for getting involved earlier, there is understandable anxiety about whether this is actually going to reduce overall approaches and free up budgets, or if demand will increase to fill the capacity available.

How Policy in Practice can help with effective early intervention

To make early interventions effective many leading local authorities are now turning to data analytics. Tools such as Policy in Practice’s LIFT platform can effectively identify which residents would benefit from proactive support. As illustrated by the Royal Borough of Greenwich, this approach helps councils direct finite resources to the most useful places and people; increasing the effectiveness of early intervention work reduces the amount of crisis management needed later on.

The actions of housing and homelessness practitioners are currently limited by the systems and codes of guidance they work within. We call for three system changes to make it easier for councils to implement early intervention work:

Many councils measure the performance of officers and their service by monitoring the number of cases where duty was discharged as a result of successful prevention or relief of homelessness. By definition, this requires a homelessness application to have been made and accepted by the council as there is considered to be an immediate risk of homelessness or within the next 56 days.

Currently, effective early intervention work aimed at reducing the likelihood that a resident will need to make a homelessness application is a lot harder to recognise. Some councils use Social Return on Investment (SROI) measures to help quantify this work whereas others have alternative measures for calculating the value of early intervention campaigns.

The Centre for Homelessness Impact is championing an End it with Evidence campaign which calls for an evidence base for all policies and practices designed to alleviate homelessness. Stephen Timms MP has also recently spoken about the need for evidence-based approaches to homelessness intervention. Policy in Practice recognises the importance of evidence-led strategies as a precursor to early intervention success.

For councils to direct precious resources away from the front line it is important the interventions are given the best chance at success. An empirical bank of previously successful and unsuccessful interventions allows a more accessible route into implementation. A clearer understanding of the ‘science’ of homelessness prevention would result in clearly defined concepts, metrics and success criteria.

3. Allow councils to use their data specifically for homelessness prevention

The DWP should clarify that benefits data can be used for homelessness prevention work. There is a legal gateway (Regulations 5(1)(e), 6(1)(e), and 7(3)(a) of the Social Security (Information Sharing in relation to Welfare Services etc. 2012) that allows data to be shared with local authorities and used to support local authorities’ statutory functions around homelessness.

In our view, this includes upstream prevention work and it would be helpful if DWP would state this in their advice to local authorities. We also ask DWP to share more data, particularly Universal Credit data, which can be matched locally with other data, for example on rent arrears. This would allow authorities to accurately identify those households most at risk of homelessness and provide appropriate support before they reach crisis point.

The start of the Covid-19 pandemic represented the biggest crisis management event for local authorities for some time. No amount of early intervention work would have been able to account for the loss of earnings and dramatic changes to circumstances that residents experienced. However, as the pandemic (hopefully) draws towards its conclusion and measures such as the eviction ban are lifted, the need for early intervention is more important than ever.

A new approach to the collection of council tax in London 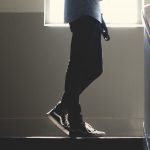 Free school meals should be for all school holidays, not just for Christmas 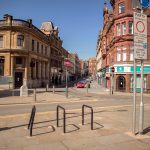 Analysis: The impact of Universal Credit in Wales