Our report into the impact of Covid-19 on the Council Tax Reduction Scheme (CTRS) in Wales, has been published today.

The report focuses on the impact of COVID-19 on the Council Tax Reduction Scheme (CTRS), council tax reduction awards and council tax arrears in Wales. It provides updated results based on April 2021 datasets and takes into consideration the latest developments in welfare policy.

Conclusions show Covid-19 has increased CTRS caseload and the total value of CTRS reductions. It has also had an impact on council tax arrears in certain local authorities in Wales.

The report also projects the impact of the pandemic as at April 2022.

In January 2019 Policy in Practice led a year-long project into the impact of Universal Credit on the Council Tax Reduction Scheme in Wales, on behalf of the Welsh Government. In addition to the impact on the Council Tax Reduction Scheme, the research considered the experience of Universal Credit claimants and stakeholders and the implications for council tax arrears and social rent arrears.

The research concluded in July 2020 and discussed how the national Council Tax Reduction Scheme in Wales could be adapted to tackle these arising challenges.

To find out more about the research, and access all the reports, visit our dedicated Wales project page.

Extending the research: the impact of Covid-19

Identifying the challenges presented by the move to Universal Credit for the administration of Council Tax Reduction, as well as its wider social and welfare implications, was key to the project.

Since then, the Covid-19 epidemic has had a swift and notable impact on the economy. The pandemic has accelerated the process of natural migration to Universal Credit by triggering changes to household circumstances.

In addition, the number of people claiming Universal Credit for the first time increased as parts of the economy were put on hold through a series of lockdowns.

These changes led the Welsh Government to extend the original project to re-visit some of the themes from the original research. Using administrative datasets from 21 local authorities in Wales, we wanted to uncover how the following have changed over the course of the pandemic:

In addition, the Welsh Government wanted to understand the likely implications of the end of furlough and the uplift to Universal Credit on the Council Tax Reduction Scheme by April 2022.

The research was carried out in two stages. First, we analysed September 2020 data, and compared this to 2019 data, to capture the initial impact Covid-19 (interim findings were published in January 2021).

In our second round of research we carried out a similar analysis, this time with April 2021 data, to monitor the ongoing impact of the pandemic. Findings confirm the pandemic’s impact on the Council Tax Reduction Scheme, and council tax arrears among CTR claimants, in Wales.

The pandemic and the economy

The shock to the economy was most pronounced in the first year of the pandemic (July 2020), as the UK Government introduced a national lockdown and imposed the part-closure of the economy. To prevent mass unemployment, restrictions were counterbalanced by income support schemes (Job Retention Scheme (CJRS) and Self-Employed Income Support Scheme (SEISS)).

Notwithstanding the protective role of CJRS and SEISS, unemployment in Wales increased from 3.8% before the pandemic to 4.8% by January 2021 (ONS using the Labour Force Survey (LFS), ILO definition).

LFS unemployment provides an incomplete picture, however. People who moved from employment into economic inactivity are not considered unemployed, while the definition of ‘employment’ casts a wide net that, crucially, fails to capture the impact on employment hours (primarily a result of furlough, which covers up to 80% of wages, and company restructuring).

This has driven commentators to treat benefit-based indicators as well as other alternative sources, such as the claimant count or people claiming Universal Credit, as complementary to standard unemployment figures. The number of households in receipt of Universal Credit increased by 71% in the six months to July 2020 and has continued to increase, albeit more slowly, since (noting that some of the increase is due to natural migration).

The second year of the pandemic, corresponding to the second round of data collected in our research, has so far been characterised by the gradual reopening of the economy as well as an extension to income support measures and the temporary £20/week increase to Universal Credit (originally due to end in April 2021).

We expected these factors in particular to underlie the pandemic’s impact on CTRS and arrears.

Between November 2019 and April 2021, the number of working-age households claiming CTRS in Wales increased by 6%. The increase was mostly attributable to the first year – by September 2020 caseload had already increased by 5% compared to pre-pandemic levels, increasing by another percentage point by April 2021. 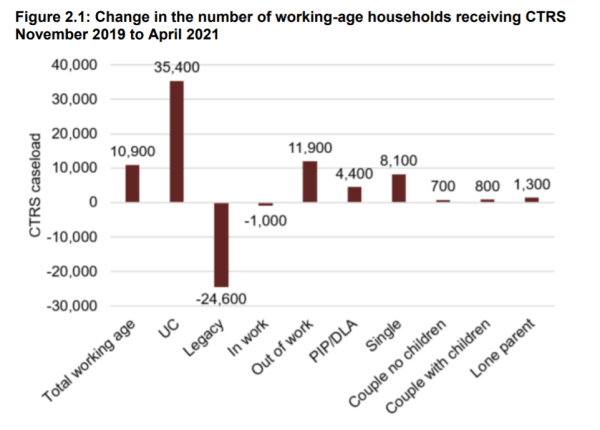 Changes to the CTRS working-age caseload during the pandemic

In contrast to findings for the first half of the pandemic where we reported a fall in the number of households in receipt of disability benefits, likely to be a result of the temporary disruption to claims processing, the overall increase to caseload was only slightly higher than among disabled households. This was an increase of 5% between November 2019 and April 2021, and is in line with other research into the demographic characteristics of new benefit claimants, who have tended to be younger and not living with a disability.

The rise in CTRS caseload is driven by Universal Credit claimants

This means the ratio of legacy CTR claimants to Universal Credit CTR claimants is fast approaching parity. While 29% of the CTRS caseload were in receipt of Universal Credit in November 2019, by April 2021 this had increased to 46%. In contrast, the proportion of other key groups remained fairly stable. By April of this year there was a slight increase in the proportion of single households (49% to 50% of caseload).

The increase to the value of CTRS exceeds the increase in caseload, in part a reflection of more out-of-work UC households

By April 2021 the annual value of CTR awards in Wales had increased by 15%, over and above the increase in caseload. This is partly due to the corresponding rise in council tax liability, which increased by an average of 8.8% over the same period.

The remaining increase to the value of CTR awards can be attributed to the overall increase in caseload alongside an average increase in the value of awards. During the pandemic average CTR awards increased due to the growing proportion of UC claimants that are out-of-work or have relatively low earnings.

In contrast to caseload, all councils in Wales saw an increase in the total value of CTRS. This was again variable and ranged between 3% and 26%.

The source of variation is likely to be related to how CTRS applications are administered, local economic conditions, local demographics, and how these have interacted with the economic fallout of the pandemic. Beyond the scope of the research, we welcome further research into the relative importance of each of these factors.

Councils were invited to provide data on council tax arrears in order to capture whether CTRS claimants fall behind on their council tax bills, and how this has changed over the course of the pandemic.

A modest number of councils (four) provided council tax arrears data for both phases of the research. This means results aren’t reflective of the whole picture in Wales, and it’s important to note the extent of regional variation observed, even with our limited sample of four councils. Nevertheless, results provide useful insight into the trends in some parts of the nation.

Among the four participating councils, the proportion of the CTRS caseload facing arrears increased from 11% to 16% by April 2021. As with caseload, and in line with the deeper financial stress experienced by households in the first half of the pandemic, this was mostly attributable to changes between 2019 and 2020. 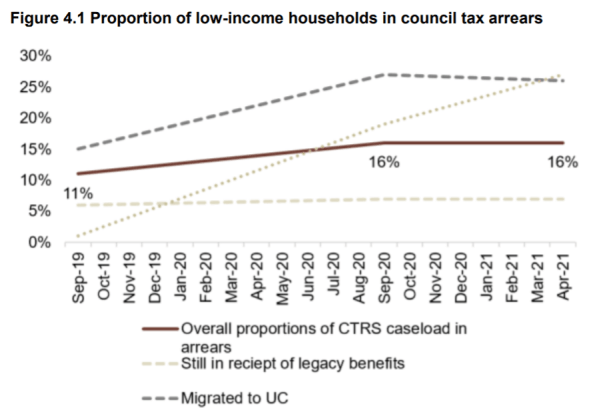 The benefit ‘journey’ matters when explaining arrears as Universal Credit households are more likely to experience arrears. The proportion of households in arrears increased the most for those that

New Universal Credit claimants were particularly likely to be increasingly in arrears, which could be indicative of the difficulties faced by this group as they engage with the benefits system for the first time.

More change is coming by way of policy and employment support, as the initial shock of the pandemic wanes and gives way to a plan to ensure economic recovery can be achieved over the long term. A local approach will be needed to tackle the challenges, current and future, presented by the pandemic.

The end of CJRS and SEISS later this year is expected to have an impact on unemployment, as the parts of the economy unable to recover experience job losses. At the same time, by April 2022, the temporary uplift to Universal Credit will have ended. This is expected to translate into changes to the CTRS in Wales, which we modelled using the latest economic forecasts (OBR), research by the Resolution Foundation and labour market statistics.

Our estimates indicate that the CTRS caseload could increase by around 3,600 households, while natural migration to Universal Credit continues. The increase is assumed to come from households that are out-of-work and in receipt of Universal Credit. The corresponding increase in the total value of CTRS awards is £9.6 million.

All our webinars are free and start at 10.30 for an hour and 15 mins. If you can’t make the date please register anyway to automatically receive the slides and recording. Contact hello@policyinpractice.co.uk with any questions.