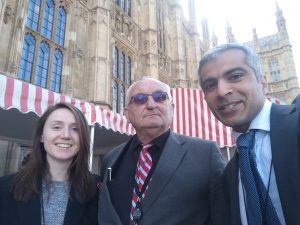 Lord Bird will outline the drivers behing his Creditworthiness Assessment Bill at Policy in Practice’s event on Tuesday 17 July.

Policy in Practice’s Leading Lights Network will explore new ways of preventing vulnerability at the House of Lords on Tuesday 17 July. The event will focus on how councils can prevent homelessness using their own data, and is kindly sponsored by Lord John Bird, founder of the Big Issue, who will be sharing his story and discussing his Creditworthiness Assessment Bill. Policy in Practice supports Lord Bird’s Bill and its potential to tackle financial vulnerability.

Having progressed through the Committee Stage in the Lords on Friday 11 May, the Creditworthiness Assessment Bill has now taken the first step towards entering the House of Commons. The Bill seeks to extend the credit files of renters by accounting for rent payments in a similar way to the mortgage payments made by owner-occupiers.

The Bill represents a clear way of realising Theresa May’s maiden speech promise to support people who are ‘just about managing’ to avoid poverty. It also has the potential to smooth the long-standing chasm between owner-occupiers and those unable to afford to climb the property ladder.

We recently published a report, commissioned by the Financial Inclusion Commission, which explored the potential benefits of sharing public sector data with credit and lending agencies. The findings of that report support the premise of Lord Bird’s Bill and identify further opportunities to support those currently locked out of mainstream credit.

The scale of financial exclusion in the UK

Exclusion from mainstream financial services, such as banking accounts and low-interest lending agencies, is a struggle for many of the most vulnerable within British society. 40% of the UK population have less than £100 in savings and over 6 million people can’t access mainstream credit. These are the people Theresa May referred to in her first speech to the House of Commons as Prime Minister: those ‘just about managing,’ working hard yet unable to improve their quality of life or to make savings for times of need.

The lack of financial support available to these households leaves many with no option but to take out an informal loan with unsustainable interest rates. The Illegal Money Lending Team in England estimates that 310,000 people in the UK owe money to illegal money lenders. These people are in heightened positions of financial and physical vulnerability due to the coercive means through which loan sharks collect payments.

The Treasury has increased the money it’s spending on targeting loan sharks for prosecution to £5.5 million in 2018. However, such campaigns to tackle illicit behaviour need to target both demand and supply to avoid an endless chase. Using data to widen access to mainstream credit is a constructive way to support the government’s drive to stamp out predatory lending, by removing the need for thousands of people to be pushed towards these deals in the first place.

People who are ‘just about managing’ and who rent their homes are not currently rewarded for their years of financial responsibility. Their diligent practices of reguarly and consistently meeting rental payments are not reflected in a relative credit rating score.

Without recognition for these payments, many are denied loans from regulated agencies who could provide support in times of need. As a result, sudden hardship and financial risk too often turn to crisis because of spiraling debt attached to informal loans.

A 2017 report by Shelter estimated that 78% of the rise in homelessness since 2011 has resulted from eviction of private renters, a bleak representation of the financial precarity in which so many renters are placed. Where a low-interest loan is offered based on payment history, households could better withstand the pressures of sudden hardship.

Using rental data to assess a person’s credit rating, as proposed in Lord Bird’s Bill, will give credit where it’s due and widen access to mainstream credit among renters. Expanding their credit files will increase the likelihood that those who can afford a loan are granted one by an FCA regulated agency.

Policy in Practice argues that the Bill should go further to make key public sector data anonymised and accessible to government departments, local authorities and other trusted third parties

Household level data sets held by local authorities have the potential to expand access to mainstream credit by accounting for an individual’s overall income rather than simply their earned income. This would provide a truer picture of a loan’s affordability to the customer. Given the heightened responsibility placed onto lenders in this area, this brings benefits to both sides of loan provision.

To learn more about how household level data can be used to prevent homelessness and better target support click here or contact us.

Our analysis found that these measures would make a further 4.8 million people eligible for a mainstream loan, if paired with a reduction of the income threshold from £15,000 to £13,000.

The Centre for Responsible Credit objects to this Bill as they say those who remain excluded may be further isolated. However, it seems unfair to withhold benefits from those making timely payments on such a basis where protections could be established instead.

In the case of those who remain unsuitable for mainstream credit, this differentiation will provide a clearer indication of those in need of support, and how these can be best met. Sharing data between financial providers and public agencies will allow for a more comprehensive security net to be provided to vulnerable households.

Challenges exist but they can be overcome

The most significant challenge likely to face these proposals is the unwillingness of the financial sector to change their systems to accommodate large swathes of new data. Any legislation would need to stipulate that the new data pool is used by all lenders in order to have impact and to overcome this challenge.

It is possible to smooth this transition by focusing on the potential gains for businesses from the widened consumer base they could access as a result of the proposed data sharing. Furthermore, the improved means to identify a customer’s ability to pay would reduce the risk involved for both consumers and lenders.

Join Lord Bird at the House of Lords

Lord Bird will outline the drivers behind his Creditworthiness Assessment Bill to our Leading Lights Network on Tuesday 17 July at the House of Lords. View details and register your interest to attend here.