Policy in Practice has responded to the Government’s proposal. We welcome both the commitment to ensuring that free school meals are maintained for those on the lowest incomes, as well as the protection measures proposed for those that lose eligibility.

However, it is our view that the proposal, as it stands, does not meet the objectives of Universal Credit which is to make work pay. Our consultation response set out our main reservations about the current proposal, together with a suggested solution.

Our analysis shows that extending free school meals to all those in receipt of Universal Credit will provide meals for an additional 1 million primary school children and 870,000 secondary school children. This approach will cost the Government in the region of £692m per annum.

Why the way free school meals are awarded needs to change

What the Government proposes

From April 2018, the Government proposes to introduce a net earnings threshold for those in receipt of Universal Credit of £7,400 a year. Households with earnings above this will not be eligible for free school meals. The Government estimates that the proposal will increase eligibility to around 50,000 more pupils by the time Universal Credit is fully rolled out.

For those no longer eligible for free school meals when the criteria changes, the Government proposes protection measures so that children will continue to receive them until the end of their current school phase, either primary or secondary. These measures cover those eligible under Universal Credit as well as under legacy benefits.

Our critique: beware the cliff edge

An earnings threshold creates a sharp ‘cliff edge’ meaning that work will not pay for families earning just beyond the proposed threshold. This cliff edge is significant and magnified by the fact that these parents will have to pay for their children’s meals from post-tax income that has already been used to withdraw income from Universal Credit through the earnings taper.

To illustrate, a family with three children would need to earn an additional £3,000 to make up for the loss of free school meals. This means that a 40% increase in their gross earnings from just below the proposed £7,400 threshold would leave them no better off.

The following case study shows how a lone parent family with three children earning £7,500 per annum will be over £400 worse off a year as a result of the proposed threshold than a similar family earning £7,000 per annum.

Compounding the cliff edge through loss of other support

In addition, eligibility to free school meals currently acts as a passport to other support such as free school transport, help with school clothing, trips or music lessons. This means that the effect of the ‘cliff edge’ may be even greater than the cost of meals alone. This is illustrated in the example below.

If a family with 3 children with income just over the threshold at £7,500 per annum had to pay for school transport at an annual cost of £600 per child, they would be worse off by £2,200 a year compared to family earning £7,000 per annum.

As the number of children benefiting from free school transport is determined by localised policy decisions, it is difficult to determine how many families benefit from passported access to school transport. However, for those households who are affected, the cost will clearly be significant.

Extending free school meals to all those in receipt of Universal Credit will provide meals for an additional 1 million primary school children and 870, 000 secondary school children. This approach will cost the Government in the region of £692m per annum.

Extension of eligibility criteria does not mean that the Government need necessarily cover the full cost, or that all families will opt for school meals. Policy in Practice proposes that inclusion of an earnings threshold could be part of a wider solution which ensures continued protection for households facing an income shortfall as a result of no longer being eligible for free school meals.

In this scenario, the level of contribution towards the cost of free school meals is reduced rather than automatically withdrawn as income rises over the earnings threshold. The opportunity for partial funding could be achieved by asking parents with income above the threshold to opt-in to partially funded school meals through a question such as:

The illustration below uses an example of a work allowance ‘withdrawal’ of £24 per month per child, which equates to equal contributions from the family and the Government. 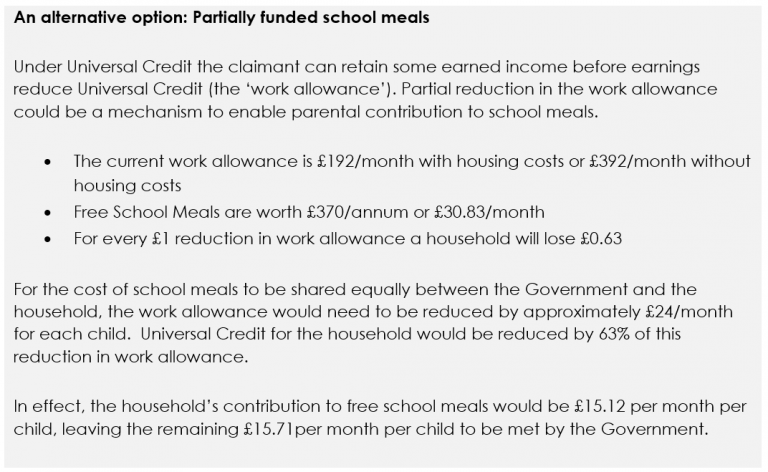 The percentage of eligible households who take up free school meals is difficult to ascertain nationally. That said, data from City of York shows that, in that local authority area, take up is 79% for primary school children and 76% for secondary school children. If this level of take up was replicated nationally, the cost to the Government would be approximately £273m.

If households were to partially fund school meals it is likely that take up, and therefore cost, would be even further reduced. This solution mitigates against the cliff-edge effect. Importantly, it also means that parity, and the integrity of Universal Credit, is restored; net income for above threshold earners is now at a slightly higher level than for below threshold earners.

Using work allowances in conjunction with an earnings threshold would ensure protection for the families most in need. It would create eligibility criteria for support for all families in receipt of Universal Credit, for example by including those above the proposed earnings threshold. And it would help to maintain the integrity of Universal Credit by ensuring that for most households, extension of work will pay.

The cost to Government can be substantially mitigated by using the work allowance mechanism within Universal Credit to partially fund meals for those above the proposed earnings threshold.

Reducing the household disregard by £24 per month per child would mean that above threshold households in work could contribute approximately 50% of the cost of a school meal rather than having to pay the full cost per meal per child.

The cost to the Government would fall to around £352m if all parents took up this option – though it is likely a significant percentage would not opt for partially funded meals, thus reducing the total cost even further. If current take-up rates, based on those from one local authority, were replicated, the cost would be approximately £273m. However, if parents were partially funding the meals it is likely that the take-up, and hence the cost, would be substantially lower.

Work incentives are maintained rather than diminished for above threshold earners using this mechanism.

This is important because if families who are eligible don’t claim this results in their local school missing out on Pupil Premium finding, worth up to £1,320 per pupil per year. Many families don’t realise this, and those with eligible children aged 5-7 who qualify for Universal Infant Free School meals may not see the point of making claim, while others simply forget.

The outcomes of increased take-up are outlined in this blog, through the impact of better nutrition on children’s outcomes. The increased income for schools through higher pupil premium funding can be worth millions of pounds.