The Existential Threat to Revenue and Benefits Departments

A short while ago the Institute for Government released a paper entitled Universal Credit: From disaster to recovery? (Nicholas Timmins, Institute for Government, 6 Sept 2016). The report charts the rollercoaster journey of Universal Credit to date, providing an insight into how the challenging policy of merging six benefits into one to simplify the welfare system has fared.

It is an excellent insight into how Policy turns into Practice. As one of the architects of Universal Credit, and someone who passionately believes that the welfare system can work more effectively, it helps to explain why little has changed – so far.

This is beginning to change with the full service rollout of Universal Credit. We are hearing for the first time a majority of revenues and benefits managers tell us that they accept that Universal Credit is going to rollout. However, they are still uncertain as to when this will happen, and what this will mean for them and their role in local welfare delivery.

While there is still much about its implementation that is uncertain, we know that the core administration will be centralised. For the majority of people, payments should be straightforward, while the local role is to safeguard the most vulnerable households, typically done via APAs (alternative payment arrangements) or USDL (universal support delivered locally) programmes.

Broadly, we see Revenue and Benefits departments falling into one of two types.

Both of these approaches are valid, without the benefit of a crystal ball none of us know what the public sector will look like in the future. We believe that the welfare system can work more effectively, and that local authorities are well placed to play a broader role in local welfare delivery. However, I would warn against assuming that their role is assured under Universal Credit.

Over the medium term, local authorities need to demonstrate the effectiveness of their support programmes – the DWP will need to be convinced that the support being delivered locally is more effective than that delivered centrally. 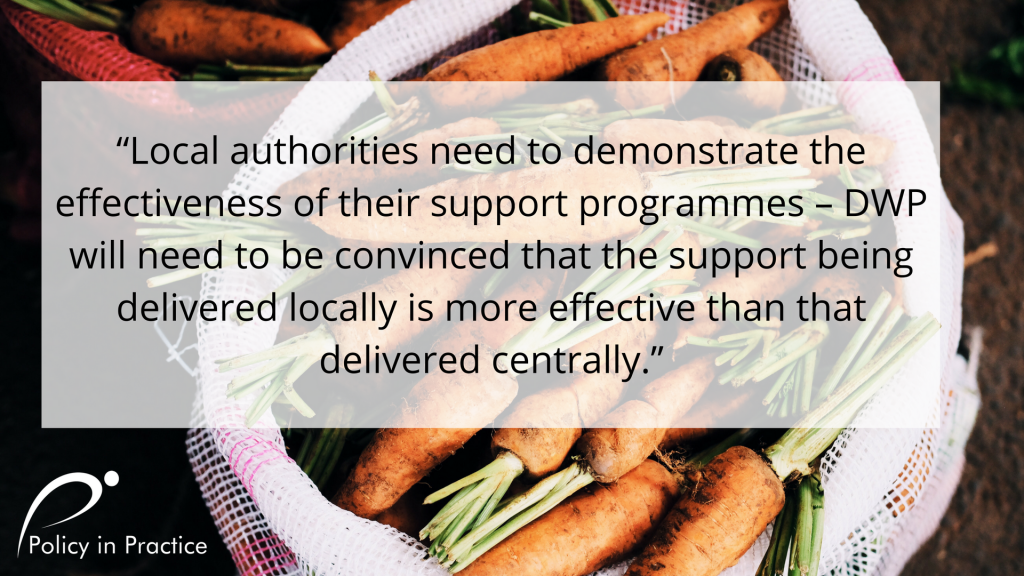 The Holy Grail – why now?

Policy in Practice is working with councils on a range of future paths, working with local authorities to model the impact of proposed council tax support schemes, to target discretionary spend to those that need it the most, and to build a holistic view of each individual low income resident, using data.

What excites us the most is the possibility of a joined up holistic approach to public services. So why now and why do we believe that some Revenues and Benefits managers are well placed to find this holy grail?

There are three main reasons:

The state of public finances, and the availability of cheap, powerful computing power is driving the use of data within the public sector. Automation is set to save the government £17bn by 2030 according to The State of the State 2016-17 report, (Deloitte UK in collaboration with Reform, 25 October 2016), and residents expect the same level of service across public sector that they receive as consumers.

At the heart of this revolution is data, and council finance teams have access to some of the most detailed information available on income, employment and poverty via hugely detailed data sets on housing benefit and council tax for individual households. This data has always been available and now some local authorities are starting to unlock its full potential, making them the data intelligence hub of the council.

Local authorities are using this data to predict which households are at greatest risk of homelessness, and of increasing pressure on temporary accommodation and council tax support spend – with the ambition to use it to track the impact their interventions are having, to learn what works.

Policy in Practice recently held a seminar attended by over two thirds of local authorities in London and four main challenges to implementing welfare reforms in the South East were identified. Those who attended, all of whom were senior finance people in local authorities, agreed that prioritising support, designing the best local support schemes possible with limited budgets, preparing for further welfare reforms and getting information from DWP were the biggest challenges they face with the welfare reform agenda.

Each of these challenges can be tackled in whole or in part through the better use of the data that local authorities already hold on their residents.

We approach this in four stages:

To learn how we used this approach with Lewisham download our How Local Authorities Can Respond to the Benefit Cap ebook here.

Thanks to the support of the Trust for London, we will be working with anonymised data on half a million individual low income households in London to track income, employment and poverty on an ongoing basis. We will learn what life events trigger changes in people’s incomes, and explore how this data can be used to strengthen policy analysis.

Our approach involves working with standardised datasets held across local authorities. We actively look for ways of sharing best practice with other local authorities so that they can benefit too, and there is strength in numbers when trying to influence DWP.

As well as achieving the project outputs we also want this work to form the basis of a case to DWP to secure the release more and better data to local authorities and other local organisations from the Universal Credit programme.

Given that the household level data set used to make housing benefit payments and currently held by local authorities will be transferred over to Universal Credit, held by DWP, local authorities have a final hand to play the excellent hand of data intelligence cards they have been dealt.

The best way to overcome institutional inertia within both central government and other local departments is by working together to robustly evidence the cost and the impact of policies and associated interventions to the council and wider society.

This article was originally published in IRRV Benefit magazine, December 2016.