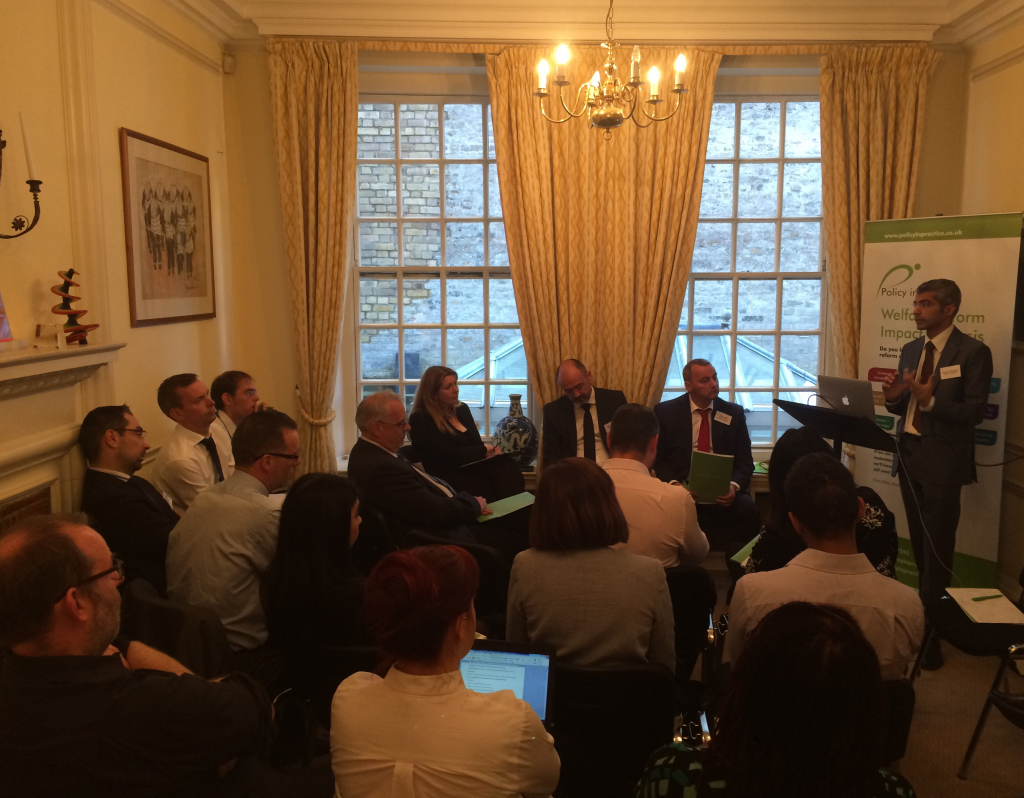 Local authorities in London are tackling the same four challenges when it comes to implementing welfare reforms, according to attendees at Policy in Practice’s breakfast seminar this week.

With the lower Benefit Cap coming into effect Autumn 2016 and Universal Credit firmly in its implementation phase, understanding the impact that welfare reform policies will have on individual households is more critical than ever.

For budget hit local authorities, it’s equally important to understand the impact of interventions. Targeting support to those households where it will have the greatest impact is crucial as local authorities continue to find ways to deliver more with less.

Policy in Practice hosted an event in Westminster that showcased pioneering work being done by two London councils.

Mark Fowler spoke for Croydon Council who are ahead of others on their welfare reform journey, already implementing full service UC. Their work combines pre-emptive analysis with proactive programmes that will reach out to households and offer support, before reforms hit them.

Steve Hill from LB Tower Hamlets explained how they have been able to generally protect households from the impact of welfare reforms to date, and how they are learning from others as they reassess the design of their local support schemes

Senior finance people from almost half of the local authorities in London agreed that prioritising support, designing the best local support schemes possible with limited budgets, preparing for further welfare reforms and getting information from DWP were the biggest challenges they face with the welfare reform agenda.

The cost and availability of temporary accommodation and social housing, plus the difficulty of engaging people who are eligible for support and the impact of reforms on the mental health of vulnerable residents were other immediate concerns.

Delegates gave a broad range of priorities their organisations have, such as identifying families most at risk, updating policy to ensure that reduced financial assistance goes to those with the highest need and understanding the multiple impacts of welfare reforms on residents. More than one London Borough raised the impact of reforms on those boroughs who must accommodate households who have been evicted from their tenancies, causing increased demand for emergency and temporary accommodation.

As one of four national benefit cap pilot councils, Croydon’s experiences of implementing welfare reforms started earlier than most, as Mark Fowler, Croydon Council’s Director of Welfare and Gateway, explained. The need to quickly understand the impact of the reforms on customers and support them holistically by moving away from traditional silo working, was identified early on. Interventions were designed around the customer, and a unique outcome based engagement approach was implemented.

Croydon had turned the use of this data, and targeted interventions into a ‘business as usual’ approach. It has taken time and commitment but it has been worth it. Mark’s advice was to not give up, identify practical uses and keep challenging your partners and frontline staff to improve how they deliver services.

In addition to understanding the aggregate and cumulative impact of the full welfare reform programme, both current and future, Mark has commissioned Policy in Practice to develop an innovative Customer Journey Tracker to understand the ongoing impacts of welfare reforms on Croydon’s low income households and monitor the performance of support interventions. Multiple data sets, in addition to the council’s SHBE data, can be overlaid to provide extra depth to the analysis possible.

The statutory requirement to support their most vulnerable citizens, along with significant budget cuts of circa 20% and the housing crisis in London, was described by one local authority delegate as the perfect storm. The continuing reductions of overall benefits payments to residents is seen as an additional contributory factor.

The availability and cost of temporary and emergency accommodation, together with high rental costs, are housing issues that continue to get worse in the South East. One delegate highlighted the difficulty of getting landlords on board and another raised the point that, as one borough’s accommodation fills up, people are moved to neighbouring local authority areas, sometimes outside of London, so the knock on effect on housing availability ripples further afield.

Steve Hill, Head of Benefits at London Borough of Tower Hamlets, shared his recent experience of developing potential replacement CTRS scheme options against a short timescale and for a changing set of stakeholders.

CTRS schemes provide help for households to pay their council tax bills and, in England, are designed by each local authority. With some support areas ringfenced, funding reduced due to budget cuts and support needs increasing due to welfare reform policies, local authorities face big challenges when designing their best-fit CTRS scheme.

Tower Hamlets commissioned Policy in Practice’s CTRS modelling consultancy which helps councils model different options for council tax support schemes, based on their local priorities. As a result, Steve was able to present various scheme options to Members who have valued the comprehensive options provided and, most importantly, the granular level of detail the analysis of the different options have shown.

Challenge 3: Preparing for the next welfare reforms

Most attendees cited the impending full roll out of Universal Credit as the welfare reform they feel will have the biggest impact on them and their residents. In particular, the payment of housing costs for temporary accommodation and the impact on mainstream rented social housing were seen as big issues. The lower benefit cap, due in Autumn 2016, is also a concern.

However, as one delegate said, “We need to think about the cumulative impact of welfare reforms. The risk is that we focus on the next Benefit Cap, but other reforms are having a bigger impact and we need to look at change in the round.” 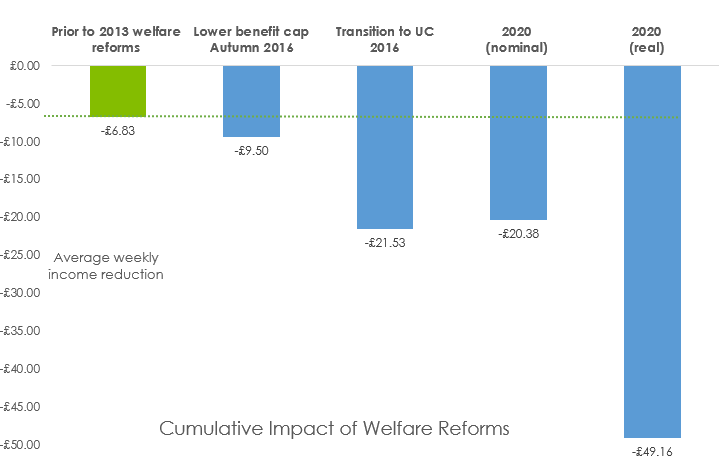 The final yet biggest challenge identified by attendees is two fold – obtaining detailed information about the actual changes that will affect organisations and customers, and having access to relevant data.

On the latter, delegates felt it critical that they have access to the right data in the future, in a post Universal Credit world. Simply put, without access to the data, the ability of local authorities to carry out analysis on the impacts of welfare reform is severely compromised.

In particular, the modelling work carried out by Policy in Practice for Croydon using household level data sets allows well informed strategic and operational decisions to be made as well as, in due course, the ability to monitor the longitudinal impacts of welfare reforms on low income households in the borough via the development of a Customer Journey Tracker.

Continued access to data is critical for local authorities

In a post Universal Credit world Policy in Practice echoes the unanimous voice of the local authority delegates who attended our seminar in calling for automatic data sharing between DWP and local authorities.

The benefits are clear. Enabling council’s data analysts and their partners to interrogate household level data sets allows for detailed and valuable insights that help strategic decision making, such as designing DHP and CTRS schemes to support individual households most impacted by welfare reforms.

Furthermore, on an operational level, concentrating the delivery of engagement programmes on those households most severely affected by welfare reforms allows local authorities to prioritise spending to where it is most needed.

Policy in Practice seeks to raise the challenges identified by our seminar attendees with DWP in due course, calling for assurances that automatic data sharing between DWP and local authorities will take place, once full service Universal Credit has rolled out.

View slides from Policy in Practice’s seminar Understanding the impact of welfare reforms in the South East here.