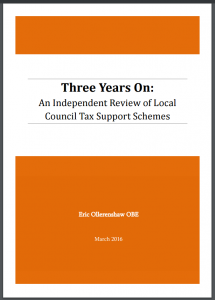 Policy in Practice is heartened that many of findings and recommendations in the report chime well with the conversations we’re having with local authorities. Together with the Welfare Reform Club we have helped councils to design CTRS schemes that also consider the cumulative impact of welfare reforms on residents, one of the recommendations the report author, Eric Ollerenshaw, calls for.

The headline findings of the report, rightly, call for the Government to give councils ‘a wider range of freedoms.’

Specifically, greater control over the Single Person Discount and to remove protections for pensioners would “improve a council’s ability to both manage financial risk, and provide targeted support to local residents in need.”

Policy in Practice supports this finding. In 2013 we called for local authorities to carry out detailed analysis of the impacts of their proposed CTRS schemes which has now been backed by the author of the report, Eric Ollerenshaw.

“A very limited body of evidence on the impact of LCTS on recipients and, crucially, the collective impact when considered alongside other welfare reforms. The point has been made by many. There is clearly a need for some in-depth and academic research in this area.” – Eric Ollerenshaw, OBE

Policy in Practice is working with over a dozen councils to help them model their prospective council tax support schemes, taking into account the cumulative impact of all other welfare reforms, as well as mitigating measures such as the National Living Wage.

Given the uncertainty around the rollout schedule of Universal Credit, the report argues that Council Tax Support should not be integrated into Universal Credit at this time. Policy in Practice argues that local schemes introduce complexity into the benefit system, and council efforts could be directed toward supporting residents if support were centralised, as it is in Scotland and Wales.

Learn more about our work on council tax support in our recent webinar, below, and read our blog post Nearly 75% of councils to cut CTRS budgets this April. For more information on the help we have given councils to create CTRS schemes please contact hello@policyinpractice.co.uk.

The report finds that councils have done well to implement schemes in a short space of time.

Whilst the impact on arrears has not been as great as first feared, the councils we speak with are very aware that this may not always be the case. The growing cumulative impact of welfare reforms, combined with the knock on effect on other outcomes including indebtedness, make it difficult to predict the long term effects of welfare reforms.

“I can’t see whether the people being clobbered by reductions in council tax support, or under-occupation are the same people that will be clobbered by other reforms.” – Steve Carey, Leeds City Council

Council tax is costly to administer which is one reason why some councils have stuck to the original council tax benefit, albeit an ever smaller number of councils that can afford to. We are working with a number of councils across the country who have asked us to model the impacts, including financial and administrative, of simpler schemes, such as those that use income bands for assessments.

The report finds that local councils carry the costs and risks, but only enjoy part of the funding and freedoms. The report calls for councils to have greater control over the Single Person Discount and protections for pensioners. In addition to this, it has not been possible for councils to identify how much funding Government is providing for LCTS schemes, all of which means that councils are limited in their ability to create the CTRS they want for their residents.

One important consideration not covered in the report is the compounding effects of cumulative increases in council tax support of 3.99%. The ratcheting effect of this over multiple years increases the amount of cash that low income households have to find. We have asked the New Policy Institute to include further analysis of this in their next report in 2017.

While savings, narrowly identified, are being found by councils, the report rightly finds that localised schemes introduce many hidden costs.

Policy in Practice is modelling the impact of increased council tax liability for individual local authorities, alongside the cumulative effect of other welfare reforms and the impact of migration to Universal Credit on the financial administrative and social impacts of various options for council tax support.

The report makes 14 recommendations to Government, which can be summarised as:

The report also makes a number of recommendations for councils:

An example of a simplified LCTS scheme

The report features a number of case studies. The case study of South Gloucestershire Council describes the experience of the only council thus far which has moved entirely away from an LCTS scheme based on CTB-style means-testing, and to a simpler system of using income bands to determine the level of LCTS support.

Although the scheme is unique, it is simple to understand and clear to both the customer and to staff. The scheme originally included eight income bands in 2014. This has been reduced to five since April 2015, which are as follows:

Developing the scheme required a significant amount of resource and expertise. In order to get a robust system in place, critical elements included:

Following this upfront investment in the core design of the scheme, the scheme can be easily adapted to adjustments the council decides to make in the future, such as, for example, protections for specific groups or band adjustments, and the scheme is more cost-efficient to administer locally.

The Welfare Reform Club, the local welfare delivery consultancy, estimated that savings of some 30% could be achieved by moving to a discount scheme by 2019.

South Gloucestershire Council remains happy to share their experience with other councils who are considering a simplified system of delivering LCTS.

The report says “There were some concerns when Government announced plans to localise council tax benefit that this would lead to a system that lacks transparency.” The following case studies are highlighted as good examples of councils who have communicated changes to LCTS schemes and the available support well.

Harrow attributes its relatively high collection rate for LCTS recipients partly to its intensive and early engagement efforts in 2012-13, which included engagement with several thousand customers, the voluntary and community sector and with enforcement agencies.

For more information on the help we have given councils to create CTRS schemes please contact hello@policyinpractice.co.uk.