Policy in Practice has pointed out that the Government’s proposed tax credit cuts will increase the effective marginal tax rate for people in receipt of tax credits – to reach as high as 93 per cent. Many have been shocked to hear of such high effective marginal tax rates. We assume that the wealthy will stop working if taxed at 50 per cent, so why do we expect others to work for much less?

For those acquainted with the benefits system, staggeringly high effective marginal tax rates are nothing new. The welfare system can be a complicated maze of work allowances and taper rates which causes many to genuinely wonder whether they are better off in work.

To explain how the system works, I have examined the case of Laura, a lone parent with one child. The chart below shows how Laura’s take home income increases and her benefits fall as she increases her working hours. 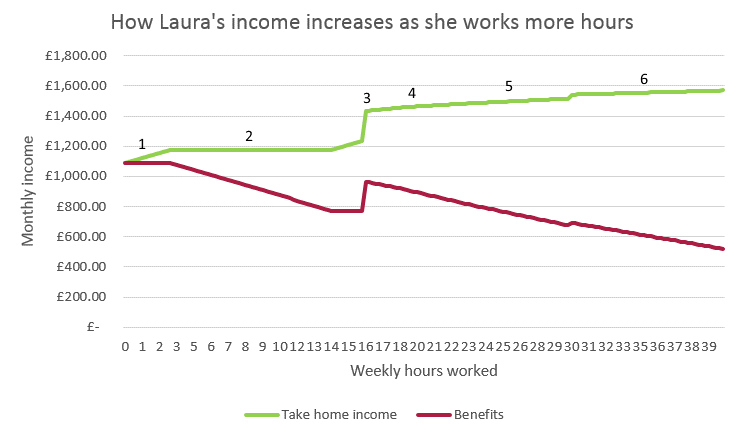 As you can see, the welfare system makes it very hard for Laura to increase her earnings through work. Believe it or not, this is a simplified explanation. When you add in other factors like Council Tax Support, Free School Meals and childcare costs things get even more complicated.

The impact of tax credit cuts

As we’ve seen in Laura’s case above, those in receipt of Housing Benefit and tax credits who pay income tax and National Insurance contributions currently face an effective marginal tax rate of 91 per cent:

The Government has proposed to withdraw tax credits at 48 per cent, rather than the current 41 per cent, which will increase this effective tax rate to 93%:

They also propose to withdraw tax credits sooner, reducing the income threshold from £6,420 per year to £3,850 for people in receipt of Working Tax Credit, and from £16,105 to £12,125 for people only in receipt of Child Tax Credit.

So what does all this mean for Laura? The table below examines how Laura’s weekly income would change in 2016 and 2020 if she were working 35 hours per week. It takes into account the Government’s ‘package’ of reforms: The National Living Wage, a higher personal tax allowance, and reforms to tax credits.

Laura will have higher earnings and benefit from a higher personal tax allowance in the future, but the increase in her net earnings does not compensate for the tax credits she has lost, even in 2020 when the National Living Wage reaches £9 per hour. That’s largely because Laura has an effective tax rate of 93 per cent, and only sees 7p for each £1 in increased earnings reach her pocket.

This Government promised that it would reform the welfare system to make work pay. They have argued that tax credit cuts are necessary to create a ‘high wage, low tax, low welfare’ society and that the National Living Wage will help to compensate for the loss in tax credits.

But high effective marginal tax rates mean that low paid workers will not see much of a pay rise themselves – up to 93p in the pound of any additional will go straight to the Exchequer in reduced welfare payments and increased tax revenue.

If this Government is serious about making work pay, they must deliver not only low taxes, but low effective taxes for those on the lowest incomes.