How the housing crisis has deepened the cost of living crisis

The ongoing housing crisis is often overlooked when discussing the current cost of living crisis yet, for most people, housing is the highest living cost. In this blog post Abigail Everett explores the policy issues affecting housing affordability for households on low incomes.

With temporary accommodation rates nearly twice as high as a decade ago coupled with a sustained fall in the availability of social housing, the cost of housing for low-income households looks set to carry on rising.

Whilst a step in the right direction, we find these positive policies will fail unless other key changes are made. We need to grow social housing, help low-income households out of private rented accommodation, and increase social security to enable would-be homeowners to build their savings and financial resilience.

New analysis into the housing crisis: renters on low incomes spend over a third of their income on rent

We looked at Housing Benefit and Council Tax Support data across 40 local authorities to learn that 57% of low income households are overburdened.

A household is characterised as being ‘overburdened’ by their rent when they spend more than 30% of their income on housing costs. We found that renters on low incomes spend an average of 34% of their income on rent. This ranges from 31% of income for council and housing association tenants to 42% for private tenants, demonstrating the huge difference across tenures.

In London, private tenants on low incomes spend an average of 50% of their income on rent.

Private rents are also rising. The increase of 2.7% over 2021/22 was the highest annual growth in rental prices since the ONS started publishing data in 2016.

Housing crisis: The decreasing value of the Local Housing Allowance

A key issue faced by households on low incomes that are renting in the private sector is a lack of tenancies covered by the Local Housing Allowance (LHA). The LHA is the maximum that households on means-tested benefits renting privately can claim in housing support.

The LHA was introduced in 2008 in line with median rents. This was reduced to 30% in 2013, and rates were then frozen in 2016 for four years, before being uprated to realign with the 30th percentile of market rates in 2020. These have since been frozen again, meaning that the value of the LHA will steadily fall below the 30th percentile as rents increase.

Policy in Practice’s analysis of local authority administrative data shows that 32% of private renters face an LHA shortfall, meaning they have to cover part of their rent using other income. Those without earnings must use other benefits income or apply for limited discretionary funding from their local council to pay their rent.

The average LHA shortfall for impacted households is £151 per month or over £1,800 per year. This is higher than the expected increase in the energy price cap expected this October, showing the impact the housing crisis is having on renters, and on the overall cost of living crisis.

Policies such as Help to Buy or the introduction of high Loan to Value mortgages have focused on helping people to buy their own homes. There has been much less support for renters.

The graph below shows how the stock of local authority or social housing has fallen in the last 30 years (as has the proportion of owner-occupier households), while private rented accommodation has risen from 9% to just under 20% in the last 30 years. 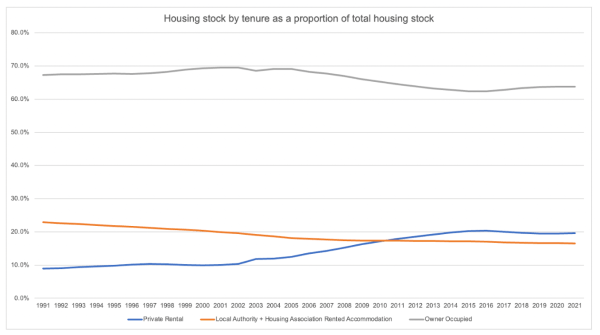 Privately rented accommodation is more expensive than social housing, increasing the cost to taxpayers and putting more people at risk of being unable to afford their rent, and therefore of losing their tenancy. 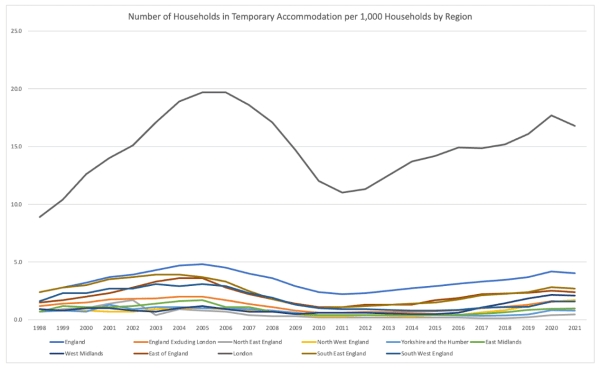 A fall in temporary accommodation is possible, as we saw when rates fell between 2005-2010, from record highs, however TA levels have begun to rise again.

In June 2022 the government announced policies that aimed to increase homeownership specifically for households on low incomes.

The so-called Benefits to Bricks policy pledged to change welfare rules to help 1.5 million people in work and receiving housing support to use their Housing Benefit to pay off a mortgage rather than to pay rent.

The government argues that the £30 billion which is currently paid out in Housing Benefit would be better spent on mortgages rather than going straight to housing associations and private landlords.

To allow households to take advantage of this change whilst on benefits the government announced a plan to suspend the savings limit on Universal Credit if a person is saving to buy a house using a Lifetime ISA (LISA).

Currently, Universal Credit is tapered once a household has over £6,000 in savings. They lose £1 income each week for every £250 or part thereof over £6,000, with households losing all of their entitlement once they have savings over £16,000.

Removing the Universal Credit savings limit would let more households claim, without being penalised for saving to buy their own home

In 2014 Policy in Practice analysed the effects of the Universal Credit savings on incentives to save. We found that a household could lose over half of their income if their savings increased from £15,999 to £16,001.

We reran this analysis using our Better Off Calculator this month. As the screenshot from the calculator shows, below, under the current rules a couple with three children where one partner is working full time at the National Minimum Wage (NMW), would stand to lose over 35% of their monthly income, by saving just £2 extra. 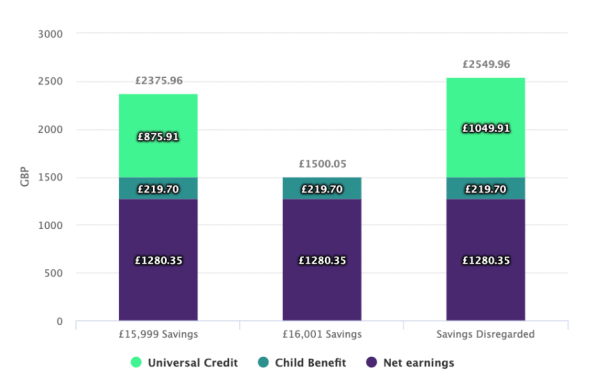 The Better Off Calculator shows that, under the current rules, a couple with three children where one partner is working full time at the NMW stands to lose over 35% of their monthly income by saving just £2 extra

If the savings limit was removed, the household with £16,000+ savings would be better off by £1,050 each month, or £12,500 per year, if their savings were in a LISA. They could save for a mortgage and escape renting privately by buying their own home. There is a significant savings-based poverty trap for households on means-tested benefits, which this policy would help to eliminate.

Most people on benefits do not have significant savings 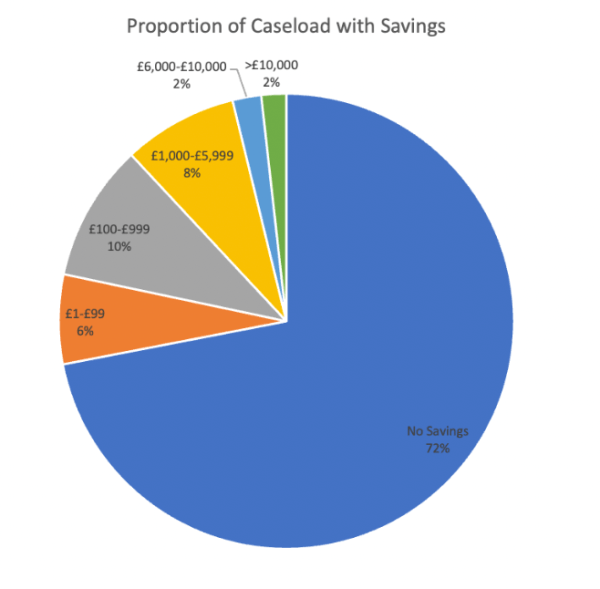 Source: Policy in Practice LIFT data engine. Most benefit claimants are unlikely to have enough savings to benefit from the Benefits to Bricks policy

Most claimants are unlikely to benefit from the Benefits to Bricks policy. Over 70% of households on low incomes claiming Council Tax Support or Housing Benefit have no savings at all, and 88% of the caseload have savings below £1,000, as shown in the pie chart above.

To help households on low incomes to save money to get onto the property ladder, the government should ensure that benefits and the benefit cap are uprated each year at least in line with inflation.

Current rules regarding LISAs would also limit the impact of this policy. You must be over 18 but under 40 to open a LISA. We find that nine out of ten households with savings are over forty years old, meaning they cannot benefit from starting to save through a LISA unless they already have one.

Savings of benefit claimants by age

The vast majority of the policy’s target audience, namely people receiving benefits and wishing to save for a deposit, cannot meet the eligibility requirements. Without any changes to benefits or LISA policies only a very small proportion of those currently claiming benefits will be able to take advantage of benefits to bricks. Most of the gain will be among those with higher levels of savings, currently ineligible for benefits.

The housing sector in the UK is characterised by a significant proportion of households on low incomes renting in the private sector. These families are paying rents higher than the available support and are overburdened by housing costs.

Analysis shows that policies such as ‘Benefits to Bricks’ and changes to Universal Credit savings limits will help some households on low incomes onto the housing ladder and create greater housing stability and affordability for these households.

However, some key policy changes are needed to ensure their effectiveness:

The policy will only benefit those households who can save enough to buy their own home. It does not go far enough to have a significant impact on the housing crisis, which is caused by a lack of affordable housing.

Instead of Benefits to Bricks, the government should invest directly in social and affordable house building and take steps to protect people struggling with the cost of living from rising rents.

Listen back to our recent webinar, How the housing crisis has deepened the cost of living crisis, on demand here 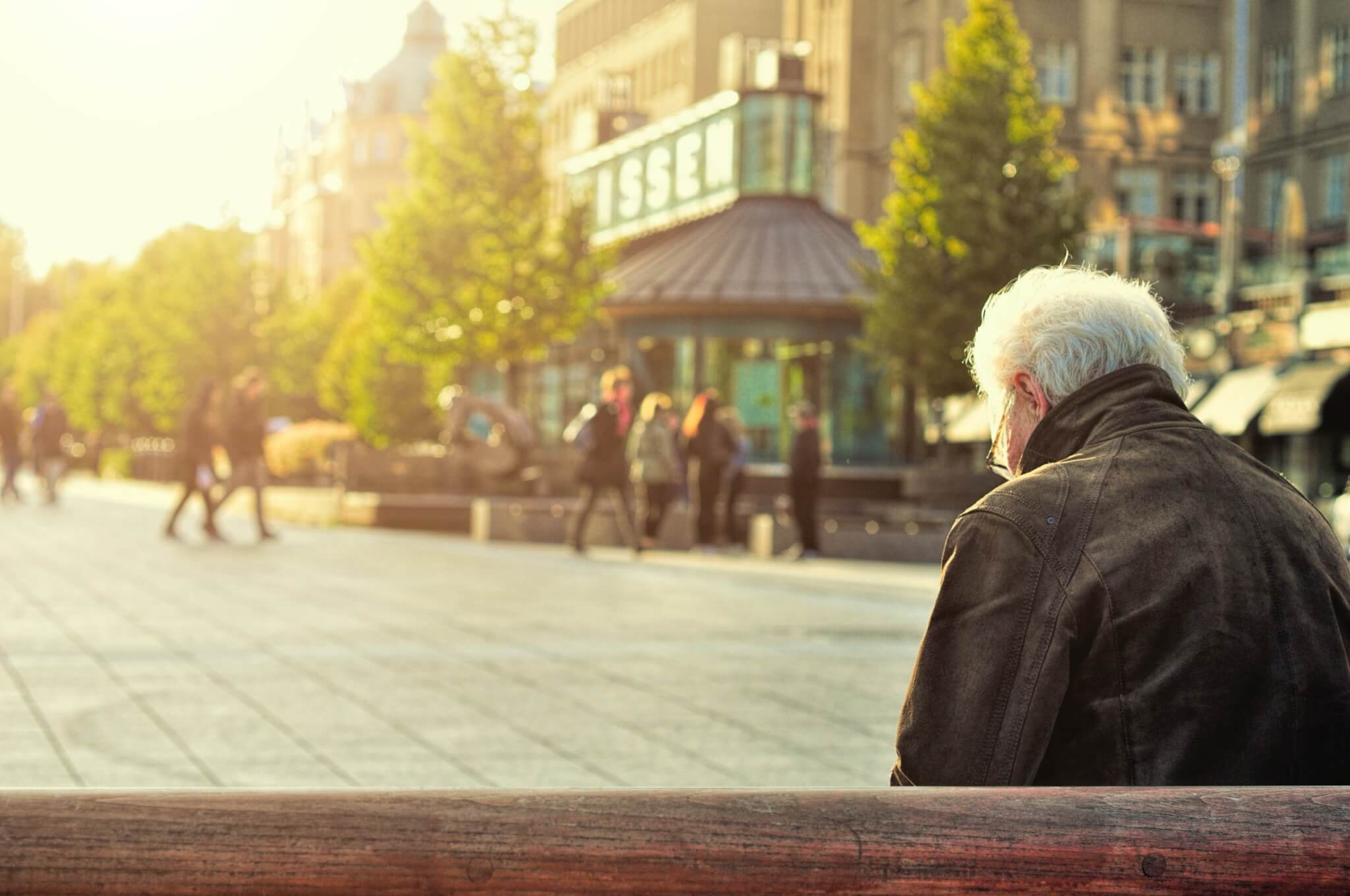