GE2017: At a glance comparison of manifesto pledges on benefits, work and housing policy

Ahead of the snap general election this Thursday 8 June, most of the campaign conversations have centred on Brexit. You’d be forgiven, therefore, if you were not completely up to scratch on the main parties’ pledges around benefits and welfare. 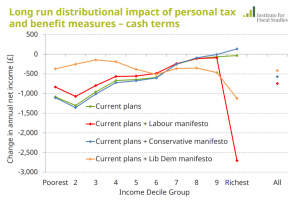 Policy in Practice has reviewed the main manifestos and drawn out where each of the main parties stand.

You can listen to Damian Green, the Secretary of State for Work and Pensions, and Debbie Abrahams, his shadow counterpart, on the  BBC Radio 4 Today programme here (skip to 2 hours and 10 minutes).

An overview of the distributional impact of their spending plans calculated by the Institute of Fiscal Studies is shown in the graph. The Liberal Democrats are notable in their support for lower income households, by committing to reversing the benefits and LHA freeze and re-investing in work incentives under Universal Credit.

The Conservative manifesto (p54) packs few changes or surprises around welfare and benefits, promising no plans for further radical welfare reform in the coming parliament.

Measures such as the benefits freeze or the bedroom tax will be maintained, whilst recent changes to Universal Credit, including the housing support available to 18-21 year olds, the two child rule or the cut to work allowances, will not be reversed. Similarly, the controversial regime of sanctions or assessments for those in receipt of disability benefits will also be maintained.

The major changes that are announced concern pensioners almost exclusively. The “triple lock” on pensions will become a “double lock”, meaning that pensions will be increased by a percentage equal to the higher of annual earnings growth or annual price growth. Winter fuel payments, which are currently universal, will become means tested, and the retirement age will be subject to change in relation to life expectancy.

The Labour manifesto (p56) pledges to reverse many of the cuts made to working age benefits by the Coalition and Conservative governments.

They promise to scrap the under-occupation charge (commonly known as the bedroom tax), which reduces the Housing Benefit paid to households with more rooms than they are deemed eligible for (under the same rules as for LHA). Recently implemented changes to housing support paid to 18-21 year olds under Universal Credit will also be reversed and the rates paid to people in the Work Related Activity Group (WRAG) of the Employment Support Allowance (ESA) will be increased by £30 per week. There is also a pledge to reform Universal Credit. This could include restoring work allowances, the amount that a claimant can earn before their support beings to be tapered away, or ending the “two child rule” which limits child tax credits to two children, although neither are explicitly pledged.

Other controversial measures around disability benefits, such as introducing more frequent re-assessments of claimant’s conditions, will be completely replaced. Personal Independence Payments (PIP), which are gradually replacing the Disability Living Allowance (DLA) paid to disabled people and are not means-tested, will also consider mental health in parity with physical health.

Labour pledges to protect pension-age benefits. The “triple lock”, under which pensions are increased by the highest of annual earnings growth, annual price growth or 2.5%, will be maintained for the duration of parliament. Equally, Winter Fuel payments will be kept universal, meaning that any person of pension age (which would be kept at a maximum of 66 until at least 2020) qualifies.

Overall, Labour promises to spend £2 billion per year more on benefits though it’s not exactly clear how much of that figure each of the proposed changes accounts for, nor whether other benefits that are currently frozen will be increased.

In the Summer Budget of 2015 the Conservative government announced that all benefit rates will remain the same through to 2020, regardless of increases in the cost of living. This often-forgotten measure is arguably one of the most drastic, especially as inflation is forecast by the ONS to increase in the next few years. In our analysis of 187,000 low-income households across the UK, we find that the benefits freeze alone will cause real incomes among low-income households to fall by almost £40 per week by 2020. While the promised £2 billion per year injection would likely offset some of this, it is not clear whether low-income households would still be worse off in real terms by 2020.

The Liberal Democrat Manifesto (p58) proposes the most comprehensive range of measures to re-invest in the benefit system. This is one reason that The Economist has backed the Liberal Democrats in this general election.

Like Labour, they promise to scrap the bedroom tax and maintain the triple lock on pensions. Unlike both Labour and the Conservatives, however, the Liberal Democrats will end the freeze on benefit rates and increase them in line with inflation. The Local Housing Allowance (LHA), which is the rate at which a household is paid Housing Benefit and which is also currently frozen until 2020, will also be increased in relation to private-sector rent growth in the local area. The Liberal Democrats would also make substantial changes to Universal Credit. The cuts to work allowances brought about by the Conservative government will be reversed, the two-child rule on tax credits terminated, and both parents in receipt of Universal Credit will be allowed to earn without any of their support being tapered away.

Young people would benefit more than pensioners from the changes being put forward by the Liberal Democrats. Housing support for 18-21 year olds under Universal Credit, which was removed in April 2017, will be reinstated. Furthermore, the rates of employment support paid through Job Seekers Allowance (JSA) and Universal Credit for 18-24 year olds will be increased in line with increases in the minimum wage.

An independent review is proposed in order to calculate a new “living wage” applicable across sectors, however there is no suggestion that this would be enforced on all employers by law. As such, it is likely that the National Minimum Wage would increase as set out in the Autumn Statement of 2016.