BBC Radio 4’s Money Box programme recently reported that benefits such as Universal Credit and the state pension will rise by just over 3%. However the Bank of England’s forecasts suggest that inflation is expected to be over 7%. The stark mismatch between benefit income and costs is being laid bare.

Price increases are not going away and there is no sign of inflation coming down. In the next few months, many people across the UK are going to face the choice of freezing or starving and campaigners argue that the government’s policy response so far has been inadequate.

Policy in Practice looks at the government’s case for uprating benefits by less than inflation and argues that increased benefit support is needed to create a simple and coherent social security system.

Uprating decisions made months before implementation

Benefits uprating differs from price or wage inflation because uprating decisions are made in September for uprating the following April. The government’s argument for this approach is that ‘you win some years and you lose others’.

The delay between decision and implementation is needed because, historically, it used to take months to change and test the legacy payment system to ensure that payments in April were accurate. It’s not clear whether this is still the case; the advantage of Universal Credit’s digital by default design was ably demonstrated during the pandemic when support was added and removed rapidly.

Operational systems and their ability to cope with change aside, the politics of uprating benefits can still be challenging.

There was an uproar in 2012/13 when benefits were uprated by 5.2% while wages increased by around 2.8%. This was an issue for voters and, by extension, those politicians who had campaigned on a platform to ‘make work pay’. This mismatch between benefit uprating and wage inflation went on to justify, in part, the subsequent three years of limited benefits increases of only 1% from 2013 onwards, and further freeze after that.

This year the government, as well as campaigners calling for higher benefit uprating, will face a similar challenge. Should benefits be increased by 3.1% or the higher April inflation figure, expected to be at least 6%, when wages are only increasing at a rate of 4.1%?

The politics of uprating

People who are just outside of the benefit system and struggling financially may feel they are unfairly missing out on support. These concerns are one reason why both Conservative and Labour party members called for support measures to help a wider group of households in order to tackle rising energy prices, rather than just using the benefit system to administer support.

The chart below, based on data from the House of Commons Library, demonstrates how benefits, earnings and the Consumer Price Index (CPI) interact with one another. We can clearly see that for the last decade, benefits have predominantly been uprated by less than wages or costs. 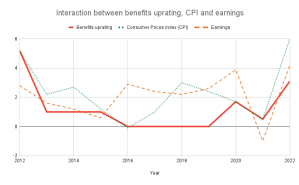 Another argument for limiting benefits uprating is that, politically, it is harder to take money out of the system than to put it in. Once benefits are increased or uprating rules changed there can be concern over whether these changes are sustainable. However, by withdrawing the £20 Universal Credit uplift, we have seen first-hand that difficult decisions to take support away are possible under this government.

Universal Credit is the best vehicle for targeting support

Uprating benefits alone won’t remove the risk of destitution or tackle the inherent complexity of the benefit system. Policy changes such as the benefit cap or the two-child limit mean that households affected by these policies have to redirect money from their standard allowance to plug these gaps.

These gaps are partly plugged through locally administered discretionary support, such as Discretionary Housing Payments or Local Welfare Assistance. However, Policy in Practice analysis shows that 1 in 5 of people who need this support aren’t always aware that it exists, whether they’re eligible, or how to access it. In addition, there have been six additional discretionary support schemes since the pandemic began, putting a strain on already overburdened local authorities as well as signifcantly driving up costs.

Universal Credit is the best vehicle for targeting support. It helps people both in and out of work and at all levels of income, with some families eligible at earnings of up to £50,000 per year. It can catch those people just outside of the benefit system who are also struggling, and it allows for benefit rates to be changed at much shorter notice, meaning changes could be much more effective.

Universal Credit can and should continue to be made simpler. Reducing distortions like those affecting renters and larger families should be eliminated so that that standard allowance can be uprated properly and used to cover day-to-day living costs, as intended. This will reduce the need for a multitude of discretionary support schemes that don’t always reach people that need it and complicate the system.

Cuts to benefits have been too deep 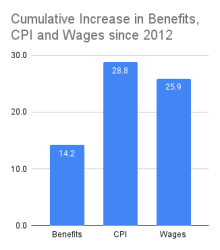 Cuts to benefits in the last decade have been so deep that many low-income households now have no or very little financial resilience left, and price increases are not going away.

The cumulative increase in benefits since 2012 is 14.2% , excluding some disability benefits that were uprated at a slightly higher rate. Prices rose by 28.8% over that same period.

The 11% fall in the value of benefits more than justifies a 6% increase this year, if the government accepts that historical benefit cuts went too far.

The trouble is that both wages and benefits are rising by less than prices.

Neither wages nor benefits are keeping up

With CPI expected to continue rising sharply, neither earnings nor benefits are keeping up.

Big cuts to benefits over the last decade mean that benefits are worth 11% less in real terms than they were a decade ago. They are now too low for people to weather the coming storm. Households on legacy benefits or on Universal Credit are not in a position to be able to wait until next year for uprating to catch up with costs.

The bigger problem for the government though is that both wages and benefits are rising by less than prices. The government needs to act to boost economic growth and reduce the cost of living so people at all income levels can start to see their standard of living improve.

If you are struggling to meet your costs use our Benefit and Budgeting Calculator to check what extra support you might be eligible for.