Universal Credit: Why work search at four weeks is a lose-lose policy

New rules encouraging people claiming Universal Credit to look for work earlier are being introduced. In the first of two blog posts, Mary-Alice Doyle explores the new requirement for work search at four weeks and explains why it is a lose-lose policy for claimants and the public purse alike.

The government has announced that work search requirements for Universal Credit claimants will become stricter with a newly introduced possibility of sanctions at four weeks. The announcement is intended to get people into jobs faster in order to boost the national recovery from Covid-19.

While there are many important aspects of the policy to consider, including the potential unintended side effects of sanctions on debt, productivity, poverty and claimants’ wellbeing, here we focus on the policy’s cost and ask even if the policy works as intended, is it worth the cost?

When we factor in the lost tax revenue and higher Universal Credit payments from having people in the wrong jobs, we find that the policy is likely to increase costs to the taxpayer.

Say you were working as a car mechanic, the sector with the highest number of people currently unemployed, according to the latest ONS data, and lost your job. You probably want to find another job as a mechanic. It’s what you trained for and you’re good at. But it can take time to find the right job. In the meantime, you submit a claim for Universal Credit.

Until now, you would have had three months to search for a new job as a mechanic. If, after that time, you weren’t having any luck, you would be encouraged to broaden your job search. If you did not make ‘reasonable efforts’ to do so, or if you were offered a job in a different industry and you turned it down, you could have some of your Universal Credit payments docked. This is known as a sanction.

The government’s new Way to Work campaign is aimed at increasing employment by 500,000 jobs within the next five months. The campaign features more meetings with job coaches and partnerships with employers. However, it also reduces the time you are given to find a job in your preferred sector from three months to four weeks.

This means if you haven’t found a job as a mechanic after four weeks, for example, you will be encouraged to apply for and accept any job available, effectively restarting your career in a different industry, probably with substantially lower wages. At the moment, the sector with the most job vacancies is healthcare and social work.

Work search at four weeks is unlikely to save money

In explaining the new policy, the Secretary of State for Work and Pensions invoked the public purse. Thérèse Coffey said that when you are receiving benefits you are being supported by the taxpayer; if you can work and a job is available you should take it. If you choose not to take up a job, then why should the taxpayer continue to support you?

Putting aside whether or not you agree with this statement, and assuming that the policy is effective in its stated goal of driving down job vacancies, we still find a clear answer to why it makes sense for the taxpayer to support people to find the right jobs: It costs less.

In the following example we show how it costs less for someone getting paid somewhere close to the median UK wage to be given the time to find another job with similar pay. We compare this to the policy of forcing people to apply for and accept a minimum wage job, or a part-time job after a month of Universal Credit. Let’s look at how much you would earn, and how much the public purse would save, from each of these jobs.

Ted is a mechanic and a single adult who lives in London. He is renting and has no savings or other income.

Note: Calculated using Policy in Practice’s Benefit and Budgeting Calculator. The part-time role is set at 20 hours a week. Assumes a sanction is worth 100% of the standard allowance and lasts for the full month.

Notice that the saving for Ted’s median-wage job is around four times as large as the saving would be if he took the part-time minimum wage job. So clearly, both Ted and the government will be much better off if he can get this type of job.

Of course, the policy is not that Ted should take the first job he gets and stay there forever. Instead, Thérèse Coffey explained that “Helping people get any job now, means they can get a better job and progress into a career.” But what if taking the first job Ted is offered delays him from finding a better job?

However, this creates two problems.

If taking the part-time minimum wage job delayed Ted from finding a median wage job by just one month so it took him four months instead of three, the government would be worse off. 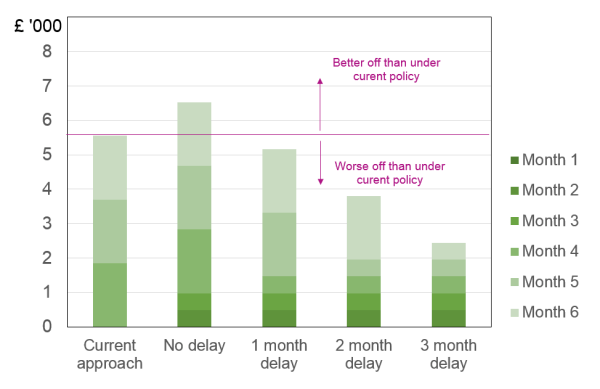 Graph 1: Public saving from an unemployed person moving to a part-time minimum wage job, then transitioning to a median-wage job with and without delay

With a full-time minimum wage job, the difference is less stark. Nevertheless, if the policy delayed Ted from finding his job by three months, which seems plausible since he won’t have the time to search as intensively or go to job interviews while working full-time, the government would be worse off. 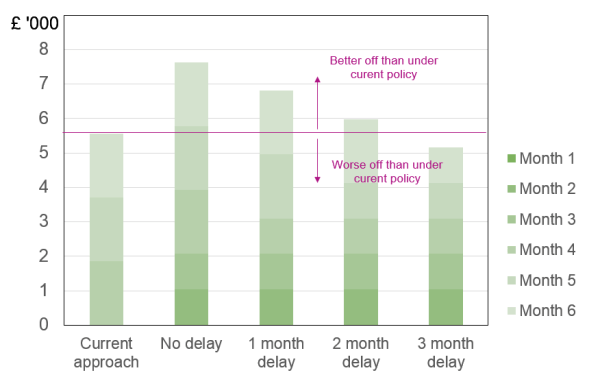 Graph 2: Public saving from an unemployed person moving to a full-time minimum wage job, then transitioning to a median-wage job with and without delay

In explaining the Way to Work programme, Chancellor Rishi Sunak said, “It’s important that everyone has the opportunity and support to find a good job to help them get on in life.” We agree, and the added support offered to employers and jobseekers is welcome. But imposing work-first at four-weeks, with the threat of sanctions, risks being counter-productive. Reviews from both the National Audit Office and the Work and Pensions Committee do not find evidence that imposing stricter sanctions will help people to find a job any quicker, let alone a ‘good’ job. The latter concludes that ‘At best, evidence on the effectiveness of sanctions is mixed, and at worst, it shows them to be counterproductive.’

What we do know is that if this programme has its intended effects of encouraging claimants to accept ‘any’ job, it risks pushing them into inappropriate jobs that may be low-paid, insecure or not provide the hours they want. If that delays people from finding the right job, by even just one month, the policy will cost the public purse money.

If we also consider the potential impact of sanctions on claimants’ physical and mental health that has been suggested by some recent research, it is difficult to see how stricter sanctions could deliver any savings to taxpayers, or to benefits claimants.

Understanding the impact this change will have on claimants

In part two of this blog post we look into the data to see how many people are likely to be affected by these new rules, how this might vary across local authorities, and what data local authorities can use to keep track of what’s happening in their local area.

Subscribe to our blog to automatically receive our posts via email, and get in touch if you would like to learn more about how we did the modelling behind this post.