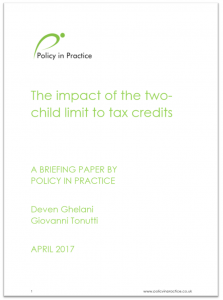 The Impact of the Two Child Limit to Tax Credits 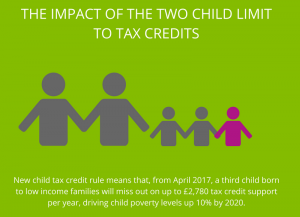 New two child limit to tax credits rule means that from April, a third child born to low income families will miss out on up to £2,780 of tax credit support a year, affecting 8,000 families each month.

From Thursday 6 April 2017 the amount of Child Tax Credit support available to families across the UK will be limited to two children. The two child limit to tax credits measure will affect all households with two or more children that have an additional baby after this date.

New independent analysis by Policy in Practice finds that more than 2 million low-income families are at risk of being hit if they have a third child, 70% of whom are in work.

The measure is set to save the government £1bn per year by 2020, helping it to meet its stated objective to reduce the public deficit and rebalance the finances of the welfare state.

Conversely, there is little evidence that the policy will have any impact on birth rates.This casts doubt on the extent to which this measure will achieve its second stated objective: to restore fairness in the benefit system between those receiving benefits and those paying for them, with families relying on public support to make the same financial decisions as those supporting themselves solely through work. Policy in Practice will track the impact on birth rates in the coming months but find that many potential parents are unaware of the changes.

Based on national data collected yearly in the Family Resource Survey (FRS), our analysis estimates that 104,000 third or additional children will be born to these families in the next twelve months. The 8,000 babies born in April will miss out on up to £2,780 of tax credit support.

Over 1 million children will be hit by the two child limit to tax credits policy by the end of this parliament.

Child Tax Credits were originally intended to provide financial support to low earners with larger families, yet those who have a third child after April will need to find £1,737 to make up the difference.

It is widely accepted that the costs of poverty, both human and financial, are significant, and that children who grow up in poverty have lower productivity as adults and have a higher risk of unemployment. There are also immediate costs to other public services that support families on low incomes.

Policy in Practice estimates that the increase demand in Free Schools Meals and Free Early Years Entitlement for two year olds will cost alone an additional £270m per year by 2020 as a result of the increase in child poverty.We also expect additional pressures on housing and other local services, as some families already struggling to pay their rent are in the same position with another mouth to feed.

“The behavioural impact of the policy remains unclear, but we know that the costs of poverty are significant.

“The Government wants to restore fairness to the benefit system. This is a worthy aim, but the cost of this policy will ultimately fall on children in the families affected. The impact of growing up in a family that struggles to provide basic necessities will mean this policy is likely to have financial and social consequences well into the future.”

Within the wider context of welfare reform, this policy represents another cap on the amount of public spending on welfare. It adds to measures which include a freeze on benefits, tighter limits on housing support and the introduction of an overall benefit cap, moving away from the needs-based principles on which the British welfare system is based.

Policy in Practice will assess the consequences of this policy through rigorous scrutiny of the outcomes for those it affects. We will be tracking changes in demographic and economic circumstances for over half a million low income households across London. This will allow for birth rates and other outcomes, including movement into work, or the need to move home, to be tracked at scale. For more information about this project click here.