Motor neurone disease (MND) is a fatal, rapidly progressing disease of the brain and central nervous system, which attacks the nerves (motor neurones) that control movement so that muscles stop working. At any one time, MND affects up to 5,000 adults in the UK.

MND kills a third of people within a year and more than half within two years of diagnosis, typically as a result of respiratory failure. Because of the often rapid progression of MND, people with the illness will usually have to give up work. In many cases, the partner of a person with MND will also have to reduce their working hours or leave their job altogether in order to become a carer.

As a result, many families where a member has MND will face significant financial stress, and may need to rely on benefit support from the state. The MND Association estimates that, in the 8 months from April 2017 to December 2017, just under £1.1m in benefits were paid to people with MND or those affected by it. Over half of these were of working-age, and will therefore be eligible for Universal Credit as full-service rolls out nationally.

Universal Credit has a substantial impact on people living with MND

Universal Credit has several differences compared to the current system of benefits, both in terms of how claims are managed and also in terms of the actual benefit amounts people will receive. Our report focuses on the changes being introduced through Universal Credit that could have a specific impact on people living with MND.

Given the rapidly progressing nature of MND, plus the fact that people living with the disease are often coming into contact with the benefits system for the first time, it is critical that Universal Credit is effective in supporting people through this difficult phase. Our report makes a series of recommendations, many of them straight-forward, which we believe can make Universal Credit work better for people living with MND.

“We want to understand how the introduction of Universal Credit will affect people living with MND, their carers and their families, in order to inform the advocacy, advice and support we provide around this issue. Policy in Practice’s expertise and insight will help us to ensure we can continue to provide the best possible support to all those affected by MND in the UK who are impacted by the transition to Universal Credit.”

Universal Credit is ‘digital by default’, meaning that claim management is done online unless the claimant explicitly requests otherwise. This brings both advantages and disadvantages for people living with MND.

For some people living with MND, such as those where the disease has affected a claimant’s speech, the online-nature of Universal Credit could make it more accessible. The fact that Universal Credit replaces 6 current benefits also means that many people may save time by having to carry out just one application.

In spite of this, for many people with MND, the requirements of the claim-making process under Universal Credit may pose significant challenges. In our report, we highlight the following as areas of concern:

The DWP definition of terminal illness is too narrow

Certain people are able to apply for Universal Credit under ‘Special Rules for Terminal Illness’, a provision which makes the application and receipt of a benefit payment substantially quicker and easier. Currently, the Department for Work and Pensions (DWP) requires people wishing to apply under Special Rules to provide a document known as a DS1500. These are issued by doctors if a patient is “reasonably expected to die within the next 6 months”. 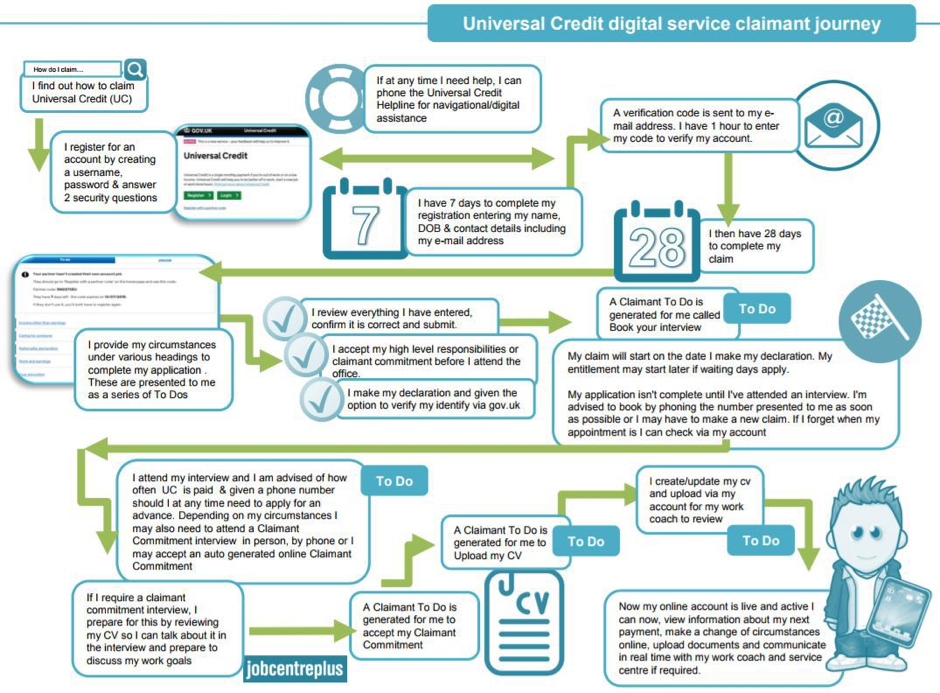 Our report finds that, despite the rapidly progressing nature of MND, some people living with the disease are not able to obtain a DS1500, due to their doctor being unwilling to certify that they are expected to die within the next 6 months. This means that some people living with MND are not eligible to apply for Universal Credit under Special Rules in England, and face having to go through a complex application process, shown above. This may include, for example, a claimant commitment interview, which may be difficult and inappropriate for many people living with MND.

Under legacy benefits DWP staff were provided with guidance on implicit consent for working with somebody representing the claimant, such as a family member or friend. Under Universal Credit, this provision does not exist.

The DWP requires explicit consent to receive information from or provide information to any representative that is not an appointee, that is, somebody formally given the right to deal with the benefits of someone else who cannot manage their own affairs, either because they’re mentally incapable or severely disabled. This has ramifications for those who need help with claim management but are not yet at the stage of requiring an appointee. The claimant will need to request explicit consent for every aspect of the claim they wish their representative to discuss, which could make managing a Universal Credit claim slower and more complex.

Most people diagnosed with MND previously held ordinary jobs, and therefore find the sudden impact of MND on day-to-day life, including their ability continue working, particularly difficult. The move to Universal Credit means that people living with MND will often deal with generic work coaches, many of whom will not be aware of MND. The role of DWP work coaches is work-focused in other words, focused on preparation for work or obtaining work. As such, they are often ill-prepared for assisting those with a terminal illness.

“People living with MND and their families may be coming into contact with the social security system for the first time. They need the system simply to support them, so they can focus on themselves and their families. We hope our recommendations, based on a thorough understanding of the welfare system and how it works in practice, will make Universal Credit and other benefits work better for people living with a terminal illness, at what is a very difficult time in their lives.”

Some will lose and some will gain support under Universal Credit

Any change of benefit scheme will have implications for claimants; there will always be some that lose support and some that gain support. Initially, the introduction of Universal Credit was intended to be cost neutral, with support moving from those out of work towards those in work. However, several design differences compared to legacy benefits, plus cost savings made from Universal Credit by the previous Conservative government, mean that the picture will be more mixed.

Policy in Practice’s analysis of data from latest Family Resources Survey shows that households in receipt of disability benefits, which many people living with MND would be eligible for,  are likely to face an income loss under Universal Credit than those not receiving disability benefits.

Over 37% of households in Britain eligible for Universal Credit but not in receipt of disability benefits would see an income loss under Universal Credit, compared to 48% of people receiving Disability Living Allowance / Personal Independence Payments and Employment Support Allowance.

If a household living with MND was placed in the Work Related Activity Group (WRAG) of Employment Support Allowance but was receiving Disability Living Allowance / Personal Independence Payments, under Universal Credit they would not receive several disability premiums available under the current system of benefits.

In our case study of Ahmed, this translates into an income loss of £348.38/week. The Government has recently announced its intention to provide transitional protection for those receiving the highest disability premium under the current system (the Severe Disability Premium). However, this protection will not be available to new claimants or those with other disability premiums that are moving to Universal Credit.

Under Universal Credit, a household is able to work any number of hours and still retain some of their earnings. This feature of Universal Credit means that people living with MND who are still able to work, or whose partners work part-time, could be better off compared to the current benefit system.

Under the current system of benefits, if a claimant living with MND has a carer that is claiming Carers Allowance, this would cause the claimant to lose the severe disability premium. Under Universal Credit, however, whether or not a carer claims Carers Allowance has no bearing on the claimant’s level of support. Effectively, people living with MND, and with a carer that claims Carers Allowance are better off under Universal Credit, compared to the current system of benefits.

Under tax credits actual income from savings and investments is taken into account. Under Universal Credit any savings above £6,000 produce  a notional income, which may reduce the entitlement. In our report, we highlight the case of Ellie, who is living with MND, and Frank, who is a teacher. They have savings of £14,000 which translates to a notional income of £139.20 per month. This would mean that they are not eligible for any support under Universal Credit.

In addition, people with over £16,000 are not eligible for Universal Credit but would have been eligible for tax credits. Many with MND will be in this situation as they may have received lump-sum terminal illness insurance payments. The Government recently announced transitional protection for households with over £16,000 in savings who transition to Universal Credit from tax credits. However, this protection does not extend to new claimants.

The best support lies with individual attention to circumstances

The changes that Universal Credit will bring about for people living with MND, both in terms of claim management and especially regarding the way that support levels may change, are complex. As a result, to best assist people living with MND as they claim benefits it is critical that organisations take the time to understand the individual’s circumstances, and from this provide tailored advice on the implications of Universal Credit.

In our report, the MND Association and Policy in Practice use the Benefit and Budgeting Calculator to illustrate the range of impacts that Universal Credit may have and to convey complex changes in an engaging way. An example of this, taken from the case studies in the report, is below. 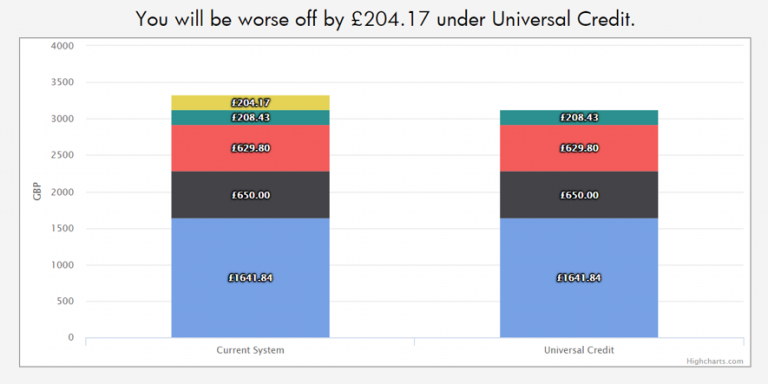 The issues highlighted within our report as potentially problematic for people living with MND have, in some cases, relatively straight-forward solutions.

Among our recommendations we make the case for amending the definition of ‘terminal illness’ in England so that it is not bound by a time limit, a change that is already underway in Scotland. This would help ensure more people living with MND are able to claim benefits under Special Rules, and therefore avoid a lengthy and often inappropriate claim-making process.

Regarding the potential loss in income that people living with MND would face, the DWP has recently shown, through its recent announcement about Severe Disability Premium transitional protection, it is willing to amend Universal Credit so that some vulnerable claimants are protected as they move to Universal Credit.

In our report we recommend that other aspects of Universal Credit, such as how payments from individual income protection policies are treated under Universal Credit, are also reconsidered in order to make sure Universal Credit effectively supports people with MND , or other terminal illnesses,  as they go through a difficult time in their life.

May
Migrating to Universal Credit during the cost of living crisis
On-demand webinar
LISTEN BACK
Menu
Manage Cookie Consent
We use cookies to optimise our website and communications.
Manage options Manage services Manage vendors Read more about these purposes
Preferences
{title} {title} {title}
Skip to content