The future of local welfare support

A new report by London Councils, Supporting Low-Income Londoners – The Future of Local Welfare, highlights the significant role that local authorities play in the provision of welfare support and finds that local authorities are often best placed to deliver local welfare support. Zoe Charlesworth takes a look at the report and shares examples of data-led innovation by some London boroughs.

The report examines central government’s current model of locally administered welfare; identifies the challenges to the provision of support to residents, and suggests an alternative approach whereby local authorities are funded to support low-income residents and have access to Universal Credit data to enable them to identify and support their residents.

Policy in Practice has worked with local authorities throughout the UK who have used data to provide innovative and cost efficient support to residents. Our experience of what is possible through localised support, if both funding and data access permits, means that we wholeheartedly support the recommendations of the report.

The current role of local authorities in supporting residents

Local authorities are uniquely placed to deliver support. The report rightly sets out the direct financial relationship between local authorities and their low-income residents through public services, the collection of council tax (and in some instances rent), the administration of benefits, and provision of discretionary support. Although the report focuses on London, a relationship between the local authority and its residents occurs across the UK, and it is this relationship that enables councils to offer locally-based and locally-targeted support. Policy in Practice has worked with a number of councils across the UK who have adopted this targeted approach. The report discusses how our customers use the LIFT dashboard to harness their benefits administration data to identify, target and support their residents. 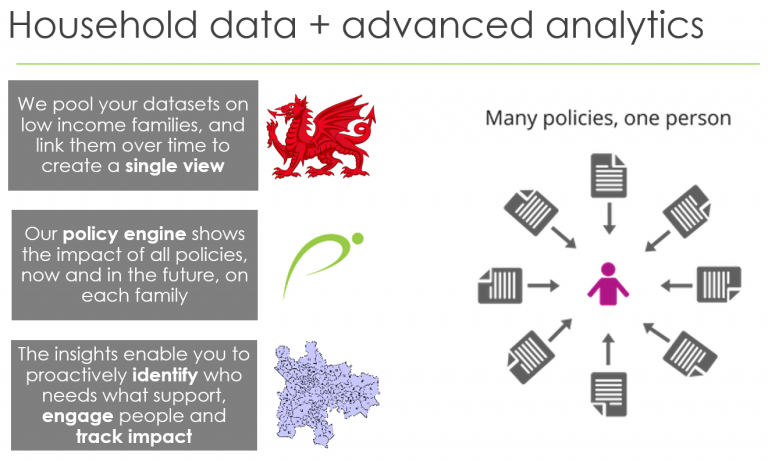 The report makes a clear case for the effectiveness of this type of locally-based support, particularly when homelessness is threatened. The rationale for local authority intervention is clear; timely intervention prevents crisis for the household but also prevents a financial burden for the authority.

There is an indication that the need for local support is increasing in the light of welfare reform, austerity measures, and the introduction of Universal Credit. The report identifies the primary causes of this increased pressure on local support services as:

Under legacy benefits many low-income residents interact with the local authority due to the local administration of Housing Benefit. This means that vulnerable clients can be identified, supported through the benefit process, and signposted to other local support services. The digital nature of Universal Credit means that this systematic interaction between many low-income residents and the local authority no longer occurs, thus preventing early identification of vulnerability and holistic local support provision.

Nevertheless, the report identifies a number of London Boroughs that have actually increased welfare support staffing levels in order to react to, and manage, the impacts of welfare reform and Universal Credit. This additional support is provided despite the fact that government funding is falling. This reduction in funding is significant – core funding for London boroughs has fallen by 63% since 2010.

Crucially for local welfare support, the introduction of Universal Credit has an impact on the level of local visibility over residents that may require support. Prior to Universal Credit, the administration of Housing Benefit meant that local authorities held rich data on low-income households which could be used to target support, particularly at times of welfare benefits change. The report by London Councils exemplifies the use of Policy in Practice’s LIFT Dashboard which allows local authorities to utilise their data to cross-reference welfare reform impacts with arrears data, identify those in crisis, and target intervention.

The loss of access to some of this administrative data restricts local authorities’ ability to holistically target this type of support and the report identifies this as a serious threat to ongoing support provision.

“In the long term if the DWP does not address the lack of effective data sharing then local authorities’ ability to effectively target support will be greatly undermined”.
London Councils, Supporting Low-Income Londoners – The Future of Local Welfare, October 2019

Policy in Practice shares these concerns and in October 2019 supported six local authority Chief Executives to send a letter to the DWP, calling for greater data sharing between the DWP and local authorities. Like London Councils, we believe that this loss of visibility over vulnerable residents will significantly hamper the best efforts of local authorities to provide the holistic support that can transform the lives of vulnerable local residents.

The impact of local intervention clearly points to a model of local welfare support that allows local authorities to provide holistic support and to proactively identify at-risk households.

“In the context of ongoing financial pressures, the benefits of proactive approaches that support residents towards independence are clear. Several of the case studies in this report demonstrate the benefits of targeted support in order to prevent future demand for statutory services and greater costs to the public sector.“
London Councils, Supporting Low-Income Londoners – The Future of Local Welfare, October 2019

The approach of the Gateway Programme is based on data-led early intervention and prevention, aiming to help households before they reach crisis. It covers housing, benefits, debt management, employment support, travel services and social care financial assessments.

These services support families within the borough affected by welfare reforms. The programme also provides financial support, skills training and welfare benefits advice to individuals and families in Croydon to prevent them from becoming homeless.

This holistic preventative approach responds to the whole family’s needs and focusses in particular on financial resilience, employment, training and housing. This approach improves outcomes for residents and also achieves cost avoidance savings for the council both in the short and long term.

To date the programme has delivered significant returns on investment including £10.9m cost avoidance through better use of discretionary funds, £14.8m raised for residents through benefit maximisation and Rough sleepers down to 13, year on year reduction since Gateway was created. Croydon Council won the 2019 MJ Award for Delivering Better Outcomes for the Gateway Programme.

The Royal Borough of Greenwich set up a Universal Support team in 2018 to provide holistic support to enable residents to manage their Universal Credit claim independently.  The Universal Support team helps claimants to maximise their income and manage council debts, as well as identifying any wider support needs, making appropriate referrals to other services. The team is co-located with the Welfare Rights Service to ensure that entitlement decisions are challenged when required. As well as self-referrals and outreach, clients are referred from other council and front line departments.

Greenwich has seen its food bank usage grow at just 1% in Greenwich compared to 20% growth in neighbouring boroughs. It also cites better use of limited support and measurable increase in living standards as a result of work undertaken to design services around prevention.

Read more about Greenwich’s use of data and how Policy in Practiced has helped here.

“It is clear that early intervention both empowers people towards independence and reduces pressure on spending in the long term”
London Councils, Supporting Low-Income Londoners – The Future of Local Welfare, October 2019

An holistic and preventative model would prevent hardship to residents and reduce costs to local authorities. However, in the context of significant funding reductions, the government’s approach to local welfare has to change. The report calls for the DWP to secure the future of discretionary local welfare support and streamline funding into a single ring-fenced grant.

In addition to funding considerations, local authorities require visibility over their vulnerable residents. The report adds to the call, made by Policy in Practice and other agencies, for the DWP to share data with local authorities. This could unlock the potential for the rationalisation of support across multiple departments, such as education, public health, social services and welfare, to target households in need.

The introduction of Universal Credit and welfare reform has changed the landscape for local authority welfare support; creating greater need for support at a time of reduction in funding and reduced visibility over those in need. This report finds that reform in local welfare funding together with greater sharing of data would allow local authorities to better support residents, empower service users and reduce cost pressures. Like London Councils we believe that local authority support will be an important part of a modern local welfare system.

Join us on Wednesday 15 January 2020 at 10:30 – 11:30 to hear how our guest speakers are using data to transform their organisations intelligently. In our webinar, Designing effective data-led local authorities, we’ll discuss how our clients are using data analysis to help redesign corporate strategy, enable services to be redesigned around residents and evidence service need to drive decision making. We’ll be joined by Mark Fowler, London Borough of Barking and Dagenham, and Fiona Clay-Poole, Neath Port Talbot Council. Find out more and register here.

Before then, we’ll be recapping on the council tax support schemes we’ve modelled for our local authority clients in 2019. Join Zoe Charlesworth and Megan Mclean on Wednesday 11 December at 10:30 – 11:30 for Lessons from our year modelling Council Tax Reduction Schemes. Find out more and register here.