Britain’s pay rise will line the pockets of the Treasury, not the working poor

The biggest headline was what the Chancellor calls the ‘National Living Wage’. “Britain deserves a pay rise and Britain is getting a pay rise,” he said.

Pay rises for low paid workers are surely a good thing. Britain is a low wage economy, with a growing proportion of people in poverty being those in work.

More than half of the 13.2 million people in poverty are in work.

But the Chancellor claims that “those currently on the minimum wage will see their pay rise by over a third this Parliament, a cash increase for a full time worker of over £5,000.”

While this may be true in terms of gross earnings, a full time worker could see just 7% of this pay rise in their pockets due to the withdrawal of benefits and tax credits.

The Treasury accrues the remaining 93% in reduced welfare payments and increased tax revenue.

Welfare is a complex system of work allowances and taper rates. It can be very difficult for people to know how much better off they will be by taking a job or an extra shift. (Unless, of course, they’re using our Universal Benefit Calculator.)

For example, take the case of Sue, a lone parent working 12 hours per week at the National Minimum Wage. In April 2016, her net earnings will rise by £8.40 per week, but her Income Support falls by the same amount – meaning she won’t get a pay rise at all.

The situation improves when she no longer qualifies for income-replacement benefits (generally when working above 16 hours per week), but not by much.

If Sue were working full-time, at 35 hours per week, an increase in the minimum wage from £6.50 to £7.20 would increase her gross earnings by £24.50 each week. But only £2.32 reaches Sue’s pocket after paying tax and losing benefits as a result of her pay rise – she keeps just 9% of the pay rise.

This is because Housing Benefit, Working Tax Credit, Income Tax, and National Insurance are all being withdrawn at the same time. 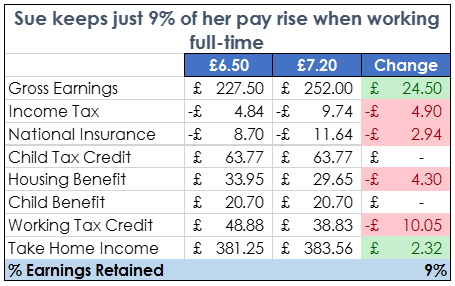 So if low paid workers aren’t seeing the benefit of the increase, where is it going? The Treasury. The Government benefits from increases to the minimum wage through reduced welfare payments and increased tax revenue, at the expense of the employer.

Cuts to Tax Credits will only make the problem worse

So far I’ve only examined the increase to the minimum wage in isolation, but there was more to the Summer Budget than Britain’s pay rise.

With all of these factors taken into account, Sue will be worse off in 2016. What she gains in a higher wage and higher personal tax allowance does not compensate for what she’s lost in Tax Credits. 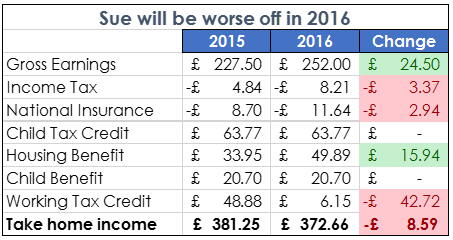 (Note an interesting quirk of the welfare system: Sue’s Housing Benefit has actually gone up. This is because her Working Tax Credit has fallen, and Tax Credits are taken into account as income when calculating Housing Benefit. I told you the system was complicated.)

Universal Credit is an improvement, but work incentives have weakened

Universal Credit is the Government’s flagship welfare policy. It will help low paid workers keep more of their earnings by combining six means-tested benefits into a single withdrawal rate.

This means that those earning below the tax thresholds will always get to keep 35% of what they earn, and those paying income tax and National Insurance will get to keep around 24%. It’s still a very high effective tax rate, but it is certainly an improvement on the current system.

Now, non-disabled people without children won’t get to keep any of their earnings before UC is withdrawn. Work allowances for others have fallen to £4,764 per year for those without housing costs, and £2,304 for those who receiving housing support.

Lone parents with no housing costs are the group that feel the deepest cut to work incentives – a reduction of over £4,000 per year.

George Osborne said in his Summer Budget speech on Wednesday:

“The OBR forecast that under the current economic conditions, almost a million more jobs will be created over the next five years. Our ambition is to go further, and create 2 million more jobs on the road to full employment. To help achieve that progressive goal, we set out today how we will make work pay.”

The Chancellor would like us to believe that simply raising the minimum wage will achieve this, but the Government benefits more from this pay rise than the low paid worker it is intended to help.

What’s more – he’s ensured that work in 2016 will pay even less for those on benefits than it does today.