Spending Round 2019: how the welfare system fared

In a brief respite from Brexit the Chancellor, Sajid Javid, announced the Spending Round 2019 on Wednesday. Given the Brexit-driven uncertainty of future economic conditions, this spending review is for one year only, 2020-21. In this blog post Zoe Charlesworth, Head of Policy at Policy in Practice, gives a brief overview of the spending review then focuses on some of the measures that could help people on low incomes and those who may be struggling.

Austerity isn’t over for everyone

An increase in public spending tends to be welcomed by low-income households, as they tend to rely more heavily on public services. However, this review does not cover spending on benefits or changes to taxes, which put money directly into people’s pockets. Overall departmental spending will still be 3% below 2010 levels, and this will be higher for those who actually use the services. So this budget doesn’t necessarily end austerity, rather lessen its impact on those households who are currently struggling.

The main areas for additional spending are health, education and security, in line with priorities already announced by the government. Between 2019-20 and 2020-21 spending on public services will increase by 4.1%, reversing around two-thirds of the real cuts to spending on public services since 2010. However, there is substantial variation within the total. The Institute for Fiscal Studies estimates that, excluding health, the additional spending will only be enough to reverse around a quarter of the cuts since 2010, or around 15% of the per capita cuts to non-health areas. 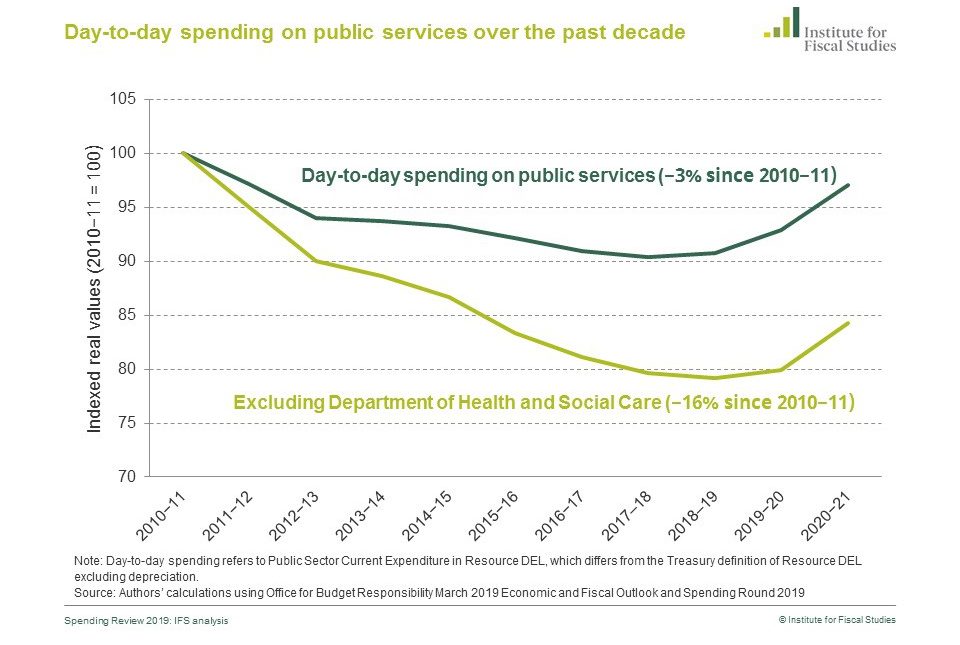 Support for people who are struggling

The Chancellor announced £54 million of new funding to reduce homelessness and rough sleeping, taking the total funding to £422 million. This is a real-terms increase of 13% and is very welcome. Our one concern is that funding of this sort is usually directed at dealing with the problems arising when people have been made homeless, rather than addressing the underlying causes. The councils we work with want to take a preventative approach to homelessness. Our experience of working with local authorities, such as Luton Council and Croydon Council, shows that investing in prevention strategies adds value in helping people avoid homelessness in the first place.

The government announced an additional £40 million funding for Discretionary Housing Payments “to tackle affordability pressures in the private rented sector in England and Wales.” This increases the 2020-21 Discretionary Housing payment budget from £140 million to £180 million and is, in effect, a tacit admission that the gap between Local Housing Allowance rates and actual rents is widening. While this extra funding is welcome it is essentially papering over the cracks, providing respite rather than tackling long term root causes.

The freezing of the LHA rates in Great Britain, announced in 2015 and in place through to 2020, has been driving a growing disconnect between the rents households must pay and the support they will receive through Housing Benefit or Universal Credit. Analysis by Policy in Practice in 2017 showed that, for households in private rented accommodation, the average income loss due to the freeze in LHA rates was £38.49 per week. Recent research by Crisis indicated that £0.8bn is required just to restore the LHA to the 3rd decile of rents. The underlying issues will have to be seriously addressed at some point.

In the Spending Review 2019 all departments received an increase in their budgets. DWP has a 1.9% increase in real terms in its resource budget, from 2019-20 to 2020-21, and a £106 million package for a range of specific projects.

Policy in Practice has long argued that the delivery of the benefit system should be adequately funded. We have heard from those helping claimants on the front-line that administration has been far from ideal and the year-on-year reductions in DWP running costs budgets have taken their toll. The best policies will not work if they are not well-delivered.

In addition to the £40 million for Discretionary Housing Payments mentioned above, the other elements of the £106 million package are:

The DWP will be supporting households who may not have had to engage with DWP before. It’s fundamental to the credibility of Universal Credit that the department gets these new engagements right, and additional funding makes this more likely.

Looking to the future: some austerity impacts are yet to come

The Chancellor’s spending review has partially reversed years of decline in public spending for some departments, notably Health and Education. There is also small additional funding to help local authorities tackle homelessness and, through DHPs, help tenants who cannot afford housing costs. Although this additional support, along with a package of funding for social care, will be welcomed by local authorities it is aimed at tackling symptoms rather than cause and is insufficient to tackle the problems faced by those with housing insecurity.

Low-income households will not be feeling that austerity is over. Although it’s been a while since we’ve had announcements of new cuts to benefits, the ones previously announced are still being rolled out and will continue to do until at least 2023, when migration to Universal Credit is due to be completed. The benefit freeze continues to impact households who have seen year on year real-terms reductions of 6.5% in their spending power. The two-child benefit limit will reduce household income by £2,800 for each third or subsequent child. The DWP’s own impact analysis expects this to save the government £1bn per year by 2020. Our own analysis, presented to the Work and Pensions Select Committee, found that the two-child limit will increase child poverty by more than 10%, with 266,000 additional children living in poverty by 2022.

Additional departmental spending is welcome, particularly for DWP and local government. We have argued for a long time that reforms like Universal Credit require investment if they are to be delivered successfully, it’s good to see recent spending reductions reversed. However, the measures in Spending Round 2019 don’t offer direct help to those struggling on low incomes. Austerity is eased for some but we will have to wait for the next spending review to see if the newfound generosity will be extended to citizens that have been most affected by the benefits freeze, and for whom further cuts are still to come.

Policy in Practice has recently been commissioned by the LGA to carrying out analysis on the impact of the LHA freeze on homelessness. To register your interest in our findings when they are released please email hello@policyinpractice.co.uk.

We know that only one in five of those in need of a DHP apply. Learn how our local authority clients are tackling that problem in our webinar How to target your Discretionary Housing Payments well on Wednesday 23 October. See more details and register here.