Guest blogger, Bill Irvine, writes about Universal Credit work allowances and rent arrears. With expert knowledge in this complex area of law, Bill’s company, Universal Credit Advice, offers support to housing associations, private landlords and voluntary sector tenants and housing providers to help them to understand welfare reform changes and the likely implications for them and their tenants. You can sign up to receive updates here.

When Universal Credit was first unveiled, one of its key objectives was to ‘make work pay’. In other words, claimants would be duly incentivised to work by being allowed to earn, a fixed sum, without their benefits being docked, £ for £.

Initially, there was some truth to the claim, as the original ‘work allowances’ were more generous than those previously applying to legacy benefits. But, I’m afraid, those have now been effectively removed or, at least, substantially reduced, for the vast majority of claimants, due to government changes introduced from April, 2016.

For single unemployed people and couples, without children or disabilities, the change means that for every £ earned 65% will reduce their Universal Credit entitlement. Or, to put it another way, they’ll keep no more than 35 pence per £ earned. This isn’t much of an incentive to work or make the effort to find work, when you factor in the costs of travel, meals, clothing etc. required.

How much ‘work allowance’ other claimants receive will depend on whether they are single or part of a couple, and whether their Universal Credit includes amounts for:

The table below shows the varying amounts of work allowance. The ‘higher’ allowance applies to claimants who don’t have ‘housing costs’ included as part of their Universal Credit claim. Otherwise, the lower work allowance applies. Those responsible for a child and who also have limited capability for work, will be assessed on the highest amount that applies. 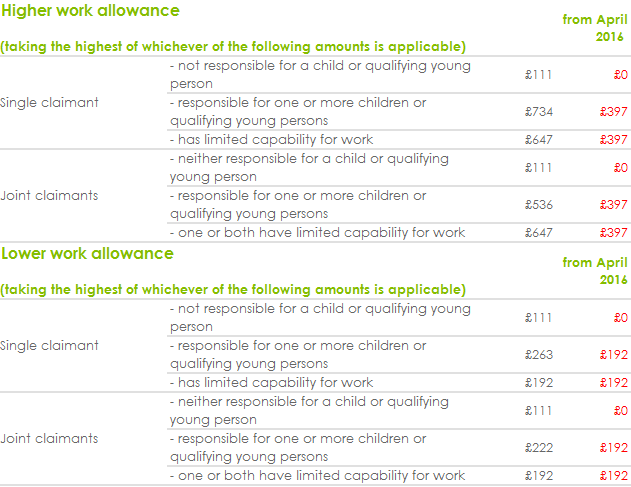 To working tenants, this is further bad news, as it means they will lose part of the Universal Credit Award, which helped meet their contractual liability for rent. As well as the change to work allowances, freezes on standard child and disability allowances for 4 years, mean that any future wage increase will result in further losses.

We already know from the recent National Federation of ALMO’s report, One Year On: An indisputable link, tenants on Universal Credit:

Responsibility for picking up that baton lies squarely with social landlords (mainly RSLs) as the DWP offer no such advice and assistance.

Northern Housing Consortium report on the impact of Universal Credit

The Northern Housing Consortium has just published the first of a series of reports, Impact of Universal Credit – Report 1, which amongst other things, points to rent arrears having risen, on average, by 41.1% in respect of tenants claiming Universal Credit, in relation to the 38 organisations which participated in the study.

The report explains how ‘its study is designed to track the impact of UC on NHC members through four separate surveys from 2016 to 2017, supplemented by focus groups to gather more in-depth information after each survey’. The first of these groups meets on 23 June in Leeds.

The authors intend sharing the information, gleaned from members (RSLs, ALMOs & Councils), with DWP in the hope this will help highlight areas of greatest concern, expose operational flaws and, by bringing these issues directly to DWP, ultimately help shape and improve the development of Universal Credit.

At the start of the report you’ll find some headline findings, listed below, which reinforce some of the findings of other recent reports, highlighted in my earlier bulletins:

The authors state “The purpose of this study is to better support DWP and their staff to ensure that rollout of UC is as smooth as possible. NHC will therefore disseminate the findings of this study to, and work with DWP, putting members’ concerns to them in the hope that this will enable resolution of on-going issues”.

I applaud this type of approach. It’s exactly what I’ve been trying to do since day one, but I have to say, DWP’s hierarchy has not always been the most receptive of partners. Although I’ve evidenced signs of progress being made, particularly in relation to the ‘digital system’, there are many areas of the scheme (notifications of claims and awards; processing of Landlord Managed Payments; confusion over lines of communication) which are simply not working as envisaged. These issues are causing social and private landlords great concern as they’re causing tenant grief and hardship and creating, for landlords, additional administration costs, rental losses and recovery costs, which cannot be sustained long term.

I would encourage you to examine this helpful report and, if you’re a member of the NHC, to support the organisation, in its laudable efforts, by providing further evidence of your experiences of Universal Credit.

If you require any further information on this or any other welfare reform topic, please email bill@ucadvice.co.uk or call 07733 080 389.