Last week Deven Ghelani and the team at Policy in Practice were asked to provide a briefing note to Lord Kirkwood in support of a proposed amendment to the Welfare Reform and Work Bill calling for the repeal of Universal Credit work allowances cuts.

The debate, at the House of Lords on 27 January 2016, featured the our analysis.

The strategic balance in the architecture of the system 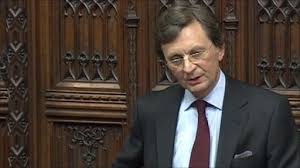 In the debate Lord Kirkwood said “What we are arguing about is part of the strategic balance in the architecture of the system.

“We have to get the architecture right before the scale-up starts, and work allowances are an essential ingredient.”

Forecasting the effects of the impact of Universal Credit on recipients

Our preliminary analysis focused on the cuts to work allowances within Universal Credit that were announced in the Summer Budget 2015, alongside changes to the personal allowance and the introduction of the National Living Wage.

We argued that the Government should maintain support for work incentives within Universal Credit.

Work allowances reward the lowest earning households in work, many of whom will not benefit from the higher personal tax allowance, or the National Living Wage.

Universal Credit will simplify the benefit system, but introducing these cuts to work allowances will not help to make work pay for low earners.

This is exactly the group the Universal Credit is being introduced to support.

The Government should be seeking to be the party that supports people in work, including low earners, and not only be a party of low taxes, but of low effective taxes.

The context to the changes to Universal Credit 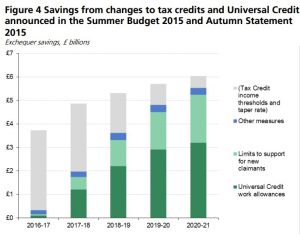 The Government’s manifesto platform was based on tackling the deficit, reducing spending on welfare, and reforming welfare to make work pay.

Overall its reforms to the welfare system have been popular, including the benefit cap and Universal Credit, which have had broad support.

These were to be implemented alongside a higher minimum wage and income tax allowance.

The changes to Universal Credit work allowances exclusively affect households that are in remunerative work.

As our analysis shows, the option to increase working hours may be limited, due to weaker dynamic effects of Universal Credit, and the introduction of the National Living Wage.

The Government has argued that when viewed as a package of measures, the positive effects of a higher minimum wage, a higher tax allowance and additional support for childcare offset the reductions for those on tax credits.

Our analysis uses the family resources survey to build a picture of the impact that these changes will have on UC recipients nationwide.

It takes into account the cumulative impact of these changes on individual households, including the net impact of higher wages, and an increased personal allowance on the UC award.

We carry out similar analysis for local authorities, helping them to understand the impact of policy changes on individual households.

We help them to build a clear picture of income, employment and poverty in order to proactively target the right support, to the right people for maximum impact on society.

The impact on Universal Credit recipients 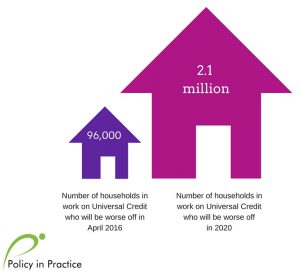 Number of households worse off

2. One-third of households will be worse off in 2020 without transitional protection

Our analysis finds that taking into account the National Living Wage and higher personal allowance, 35% of Universal Credit recipients will be worse off without transitional protection in 2020.

This figure falls to 30.5% if we take into account childcare for 3-4 years olds, and assume that each of these households are better off.

While some households clearly benefit from mitigation measures, those that earn above the National Living Wage and earn below the higher personal allowance have no mitigation in place.

3. Cuts to work allowances will limit the dynamic impact of Universal Credit 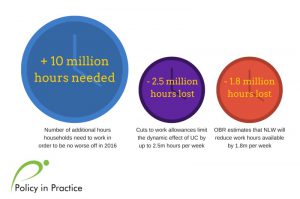 Households that are worse off under Universal Credit combined would need to work additional hours, in order to be no worse off. Our current best estimate puts the figure at an additional ~10m hours each week.

At the same time, cuts to work allowances will limit the dynamic effect of Universal Credit by up to 2.5m hours each week, and the OBR estimate that the National Living Wage will reduce weekly hours available by a further 1.8m hours each week.

Combined, these factors will make it difficult for households to make up their shortfall by working additional hours.

Policy in Practice recognises that the Government was elected to tackle the deficit, and reduce welfare spending.

It was also elected to reform the welfare system to make work pay.

Protecting work allowances within Universal Credit protects this government’s flagship welfare reform, and more importantly will protect the personal finances of low earners, already in fragile financial circumstances as they transition onto the new benefit.