Last Thursday the Scottish Parliament took evidence from Deven Ghelani on the impact of the two-child limit for child tax credits. 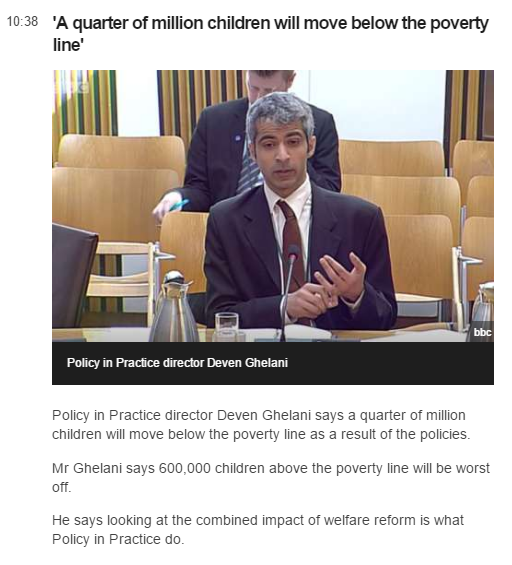 Policy in Practice welcomed the opportunity to provide evidence to the Scottish Parliament, who will soon have control over £2.8bn of social security spending that will be devolved to Scotland.

Policy in Practice carried out independent analysis on the impact of limiting child tax credit to two children, evaluating the likely impact of the policy against the governments own objectives.

Our analysis assesses both the specific and cumulative impact of welfare reforms on individual households. This allows our clients to…

We found the the policy would impact 1m+ children by 2020, both the children who would lose out on tax credit support, and their siblings.

Around a quarter of a million children already in poverty would be pushed deeper into poverty.

70% of households affected are in work, the original aim of tax credits was to support these households.

The evidence suggests the the policy is unlikely to change behaviour: the government has put limited effort to raising awareness of the policy (9 months?) prior to its implementation.

We were asked to evaluate the cost of policy. We used the Outcome-based government methodology of fiscal, economic and social impacts. While the policy does save money in the short run, it is likely to increase the cost of anti-poverty efforts, such as Free School Meals and the Pupil Premium, later on in life. The economic cost of growing up in a family that struggles to provide basic necessities can limit opportunities to develop skills and increase earnings. The policy is likely to have social consequences well into the future.

You can read Policy in Practice’s and others’ submissions to the Commission here.

Next steps for Holyrood

The Social Security Committee wanted to learn more about how to use data to make better policy and operational decisions within Holyrood, and to influence policy in Westminster. 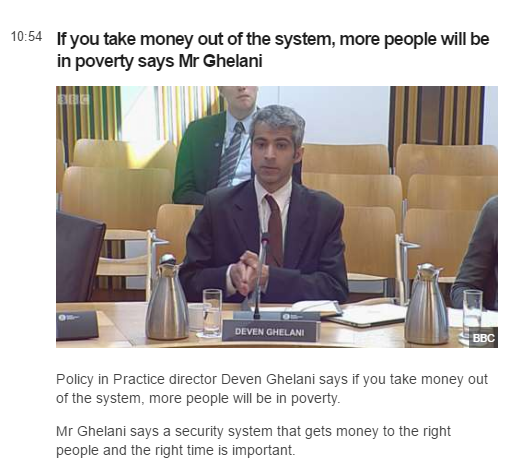 With new welfare powers and responsibility over £2.8bn coming to Scotland, this kind of in-depth, real time information can bring a whole new perspective to policy makers, and practitioners.

For example, if Scotland were to consider shifting from fully funding local council tax support, they may want to consider who will be most impacted by a range of alternative policies.

Policy in Practice’s analytical approach is based on local authority data. The Scottish Parliament would need to bring together data across all Scottish local authorities.

Policy in Practice have shown that this is possible by bring together anonymised records for over 450,000 low income households, across 14 London Boroughs, on a monthly basis over two years.

Some relevant highlights from this project funded by the Trust for London are that:

When considering how to mitigate the impact of the limiting Child Tax Credits to two children the Committee could target discretionary support to affected households through this analysis, or use it at a strategic level to provide evidence about the knock on costs that encourages Westminster to reconsider the policy.

The Government wants to restore fairness to the benefit system. This is a worthy aim, but the cost of this policy will ultimately fall on children in the families affected.

If the two child limit to tax credits policy remains in place, the Scottish Parliament will need to develop alternative strategies to improve the outcomes of children. The impact of growing up in a family that struggles to provide basic necessities will mean this policy is likely to have financial and social consequences well into the future.