In his Winter Economy Plan announced yesterday, the Chancellor outlined new COVID-19 support measures to help employees and employers. In this blog post Deven Ghelani reviews the policy changes announced and recaps his messages about the important role of the safety net provided by the welfare system.

Deven Ghelani, Director of Policy in Practice, was invited to discuss the new measures on Shelagh Fogarty’s show, LBC, on Thursday 24 September 2020. Listen back to his interview below and read the transcript, below.

Read a summary of Deven’s immediate analysis of the Winter Economy plan in his tweet thread, shown below. 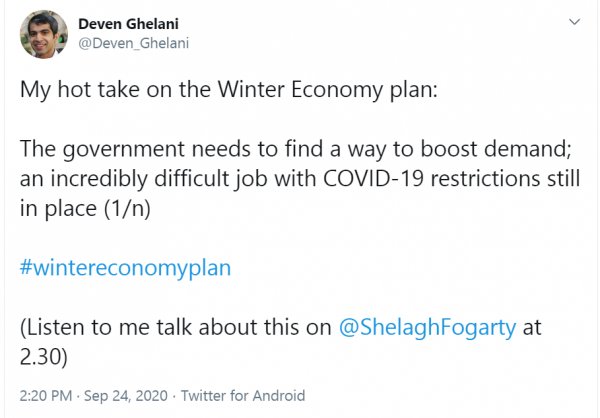 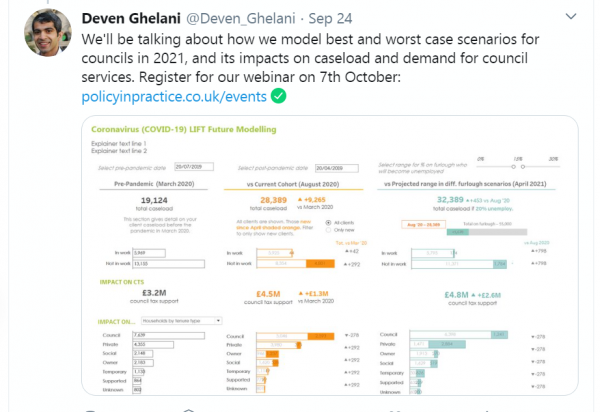 I’m pleased to say I’m joined by Devin Ghelani, Director of the Policy in Practice think tank, but also and you’ll correct me if I’m getting this wrong, Deven, one of the people who helped design the Universal Credit system, correct?

Tell me how it’s been a success

Just in the sense that the legacy system could not have coped with the increase in numbers that we’ve seen since the start of the pandemic.

When you say legacy system, you mean what preceded it?

Yes, so having to claim housing benefit, having to claim job seekers from two separate departments – you’d have to be going to twice as many places, you need twice as many staff to deal with that. Universal Credit, to be honest, barely coped but it did cope and if you had to do that across local government, central government and the tax credit system I don’t think it would have been possible. It is working in the sense that people are getting paid their Universal Credit every month, so it’s doing the job that it was designed to do. But there is more to be done and you can see that from the announcements today.

So you can see, certainly from others you’ve had on the programme, employers in particular [who are] saying I’m not sure whether this is going to do enough for me. So it’s great that we’ve got a scheme in place to replace the furlough scheme because that will stem the numbers of people expected to jump off.

The Office of Budget Responsibility said in their forecast at the end of furlough that they were expecting 10% of those people to lose their jobs in a best-case scenario. And, to be honest, with this scheme I think maybe that’s more of a middle case scenario, but it still feels about right. You’re still going to get people leaving their jobs and they’ll be coming into contact with the benefit system for the first time.

What I would say to your listeners is that you can get Universal Credit even if you are still working and particularly if you’re getting less money, so if you are moved on to a part-time role through this new scheme it might mean that you’re now eligible for some additional support.

Are there areas of Universal Credit that should change to take in some of those three million who’ve been left out in the cold completely? Because many of them have been calling me right from the very beginning saying if this goes on much longer I’m looking at the collapse of my entire working life, and then my actual life.

A huge number have come to us through Policy in Practice’s better off calculator and asking questions. Those are the four groups that really stand out where you could make a big difference

And by that you mean just change the policy, make them eligible?

Yes, it’s as simple as that. So ending the savings limit in Universal Credit would help a lot of those where their partner is earning and they’re not – they’d be eligible for some kind of support. Similarly, for people with no recourse to public funds, there needs to be something in place to help them. I remember the Prime Minister struggled to answer that question and they could do something about it.

I’m glad you reminded me of that group because you’re talking about, for example, foreign students, people whose visa status here is valid now but they haven’t got any right to claim from the benefit system and often they’re in the hospitality sector aren’t they?

Yes, in those sectors, that’s how they’ve been getting by. In a sense, the early scheme was good because they were eligible for that and a lot of employers obviously took that up but as employers have to make a bigger and bigger contribution these are the groups that are going to lose out more because they can’t access that additional support. One other big point, I think, that’s being lost here, is the importance of the benefit system in boosting demand so you do have measures in place that have made the benefit system a little bit more generous than it was previously.

Firstly, those measures need to be retained, so the extra £20 per week for example for people on Universal Credit, but it could do so much more in terms of expanding these measures.The biggest problem that the Chancellor is going to face, it’s incredibly difficult with Covid restrictions still in place but as, hopefully, we bring it under control, is going to be getting the economy back to similar levels of activity that we had before. And he did a great job with the Eat Out to Help Out scheme, I thought that seemed to work but with Covid still around, I’m not seeing [this stimulation]. I heard the pub landlord on your show earlier saying, actually no, it’s getting back to nail biting time for a huge number of businesses.

Because that change in hours of the ten o’clock closure and you know on any night, but particularly weekend nights, it’s a big deal for them isn’t it?

Like I said, the social security … if Universal Credit was going to fall over it would have done so in the last wave. The numbers of people applying when I last came onto your show were absolutely phenomenal. It’s one of the few success stories for the government in that they did redeploy staff to get people onto Universal Credit and prove aspects of how it works.

Yes. You see these problems in other countries where they are struggling to get most people, because their social security system hasn’t been modernised or made fit for purpose. That doesn’t mean there isn’t room for Universal Credit still to improve though, and I wouldn’t want to confuse those two. It’s done the job and it can handle more people but that doesn’t mean there aren’t groups that aren’t missing out that could be receiving that extra support from the government that need it now. This is what the social security system is for, it’s for people where misfortune falls upon them through no fault of their own. Anyone can get sick, particularly now, so it’s a really important part of the recovery that I think the government can invest more in.

Thank you very much good to talk to you again, Deven Ghelani, Director of the Policy in Practice think tank.

If you are an organisation providing frontline support to financially vulnerable households please join us on a future Policy in Practice webinar.

All our webinars are free and start at 10.30 for an hour and 15 mins. If you can’t make the date please register anyway to automatically receive the slides and recording. Contact hello@policyinpractice.co.uk with any questions.