The Government recently closed a consultation looking at the design of the new housing costs funding for supported housing, as well as how funding for emergency and short term placements should work.

Policy in Practice responded to DCLG on these questions, by using data from one outer-London borough to illustrate some of the issues at stake. Here we summarise the key points made in our response. We outline how a local authority could benefit from smart data analysis to anticipate the impacts of these changes and proactively act to support residents.

Supported housing comprises a variety of schemes that provide housing and support to vulnerable people. For many, it offers an invaluable stepping stone into an independent life, and is therefore of huge value as an alternative to temporary accommodation, helping some people to avoid homelessness or poverty more broadly.

Typically provided by Local Authorities or Housing Associations, supported housing is targeted to groups who are considered to be particularly vulnerable. Such groups include disabled people, people with learning difficulties, people with a history of drug or alcohol dependency problems, or young people more generally.

As such, people in supported housing have largely been protected from welfare reforms that affect tenants in the traditional social rented sector. For example, the under-occupation charge is not applied to supported housing tenants.

However, in 2009 the ring-fence around the supported housing budget was removed in England and Scotland, and in 2016 the government moved to apply the Local Housing Allowance (LHA) cap to supported housing.

Whilst it was initially decided that supported housing tenants should remain exempt from the LHA cap, the Funding for Supported Housing consultation confirms that, from 2019 – 2020 onwards, core rent and service charges will only be paid up to the LHA rate (through Housing Benefit or Universal Credit), with the difference to be made up by Local Authorities through a discretionary fund.

Why the change in funding supported housing?

The introduction of Universal Credit and a desire for a more localised, outcome based service are cited as major motives for reform.

Through the new supported housing funding system, local authorities will have an ‘enhanced role’ in decision making around supported housing in their area. They will be allowed to ‘take a more coherent approach’ and have autonomy over spending decisions.

This may be seen as a positive move by some, especially as the government have confirmed that the level of funding will remain the same.

However, questions persist over a number of issues. Chief among these are:

Using a housing data set from one outer-London borough we evaluated the likely impact of paying Housing Benefit / Universal Credit only up to the LHA rate. The dataset includes a flag for each household that is in supported housing, in this case there are 375 households in receipt of Housing Benefit and living in supported housing, as illustrated in Table 1. We then matched these households to the LHA rate that would be applied to them, according to which broad rental market area (BRMA) that they are in, and the results are as follows:

Our analysis revealed that, for the total of 214 households that would be affected by the changes to supported housing, the rent they must pay is, on average, almost double their applicable Local Housing Allowance rate. The diagram below illustrates this gap.

This substantial shortfall will soon be the responsibility of local authorities. For our outer-London authority, this difference over one year amounts to more than £1.5 million. 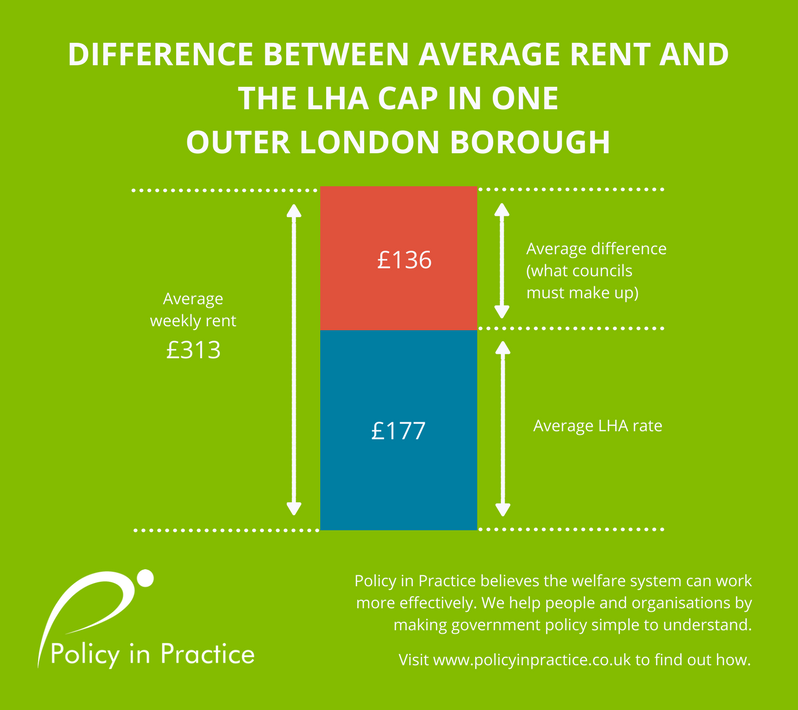 However, armed with this information, a local authority can identify those households who are due to be particularly impacted and design a support programme to mitigate the impact of the gap. The information means that it is better able to target the discretionary funding it receives to those households most in need, and make a stronger case for the total funding it requires.

Local authorities sit on a gold-mine of data on their residents in the form of the SHBE data set. Policy in Practice can help turn this data into tangible, actionable information to help local authorities adapt to changes in supported housing.

For many local organisations the analysis we provide is a strong starting point for identifying which supported housing households, in which areas, will need extra funding over the LHA cap to meet their rent. Our analysis supports planning and helps to ensure that the allocation of funding matches local need. Local authorities that have this information are empowered to act now, and will be well placed to optimise the way supported housing is allocated under the new system.

Supported housing is an essential services for some of the most vulnerable people in society. In the current context of rising homelessness across England, our analysis can help local authorities maintain support to those that truly need it.