Michael Smith’s experience with MND and the benefits system 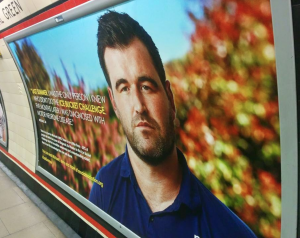 Michael and I married in 2013. He was diagnosed with MND aged 33 and passed away in January 2018. In the last year of his life I became his primary carer. Policy in Practice and the MND Association asked me to share my experience of the support available through the benefit system.

There has to be a separate process for people with MND as if they do not have partners they have no help with forms. Given the fast progressing nature of MND, it can be too fast before they have a chance to deal with it.

Applying for benefits is very hard. There should be one form to fill out that covers everything as opposed to a form for every single thing you want to claim.

There needs to be an easier way for people in our situation to find out what we are eligible for. I had no idea about some stuff and found out that I was actually able to make a claim when it was too late or even months after Michael passed away.

The new rule on bereavement benefit came in six months before Michael passed away and in my own case this now means I’ll have to go back to work when my daughter Sienna is three and a half. I worked full time, from age 16. I only stopped working to look after Michael. My husband and I both paid into the system. I feel that the system has not kept its side of the bargain.

Everything is very difficult for a person who has just been given a terminal diagnosis!

I would suggest the following improvements:

Sadly, when it comes to care most staff haven’t even heard of MND – let alone dealt with it. The amount of care varies from patient to patient, but Michael was highly dependent and really needed twenty-four-hour care five months prior to him passing away. Our experience was that staff hours were insufficient and when they did come, their ability to deal with the illness was lacking due to limited knowledge, willingness, and training.

As you can imagine, this put an awful lot of pressure on myself dealing with a baby as well. I have come to realise that no matter how dedicated the partner is, they can’t do this by themselves. Michael was given 24/7 care, 24 hours before he passed away. This isn’t acceptable.

What I would like to see in place is the following:

Policy in Practice was founded to make the welfare system simple for people to understand and to improve policy by bringing voices from the frontline into the policy development process.

It is a real privilege for Policy in Practice to have been able to work on this report and share Tracy’s experience with policymakers, in order to improve others’ experiences of the welfare and care systems.

I had the great privilege of going to school with Michael Smith, where he was known as ‘Mickel’ on the football pitch and whenever he was joking around, which was most of the time.

This report is dedicated to Michael, his wife Tracy and their daughter Sienna.

May
Migrating to Universal Credit during the cost of living crisis
On-demand webinar
LISTEN BACK
Menu
Manage Cookie Consent
We use cookies to optimise our website and communications.
Manage options Manage services Manage vendors Read more about these purposes
Preferences
{title} {title} {title}
Skip to content