Housing affordability emerges from the data as a clear driver in shaping living standards. There was an average 17-percentage point gap between the rent faced by low-income Londoners renting privately, and the Housing Benefit awarded. Totalled across all households, the gap is greatest in Haringey (£73m), Brent (£60m), Barnet (£57m) and Enfield (£54m). This indicates the areas where there is the greatest need for increases in the local housing allowance (targeted affordability funding), where the low-income cohort is struggling the most with high rents.

The transition to Universal Credit is expected to lead to 42% of households being worse off, with 36% of the total likely to be better off. Those most likely to have lower incomes are single parents and those working part time, while couples with children are among the likely beneficiaries. More than half of those in Islington and Croydon are expected to be worse off.

The number of households whose income does not cover their housing costs, a subset of those who face a cash shortfall, is projected to rise tenfold from 8,733 households in 2018 to 88,900 in 2020.

This research was supported by a grant from Trust for London. It has been extended for a further eighteen months and will track the impact of Universal Credit as it rolls out across the capital. Future analysis will include a public facing dashboard on the impacts of welfare reform, and analysis as requested by participating authorities.

The analysis is based on data used to pay out over £24bn in Housing Benefit payments each year. Ten of the participating local authorities are using the household-level data to target tailored support to households most in need, and to track the impact of their interventions.

“This research shows how wider use of administrative data can help ensure resources are targeted to those that need help the most. Councils can use their data to help with practical problems, making sure struggling families get the help they need as they move onto Universal Credit. We would like to see this type of systematic analysis adopted by government.”

“With welfare reform, rising living costs, job insecurity and the roll-out of Universal Credit, it is a time of real change for low income Londoners. The response from policymakers needs to be right if we are to prevent many thousands of people from being pushed into real financial hardship because of the changes.”

Policy in Practice used anonymised benefit data collected from 18 London boroughs to track over 550,000 low-income households over two years. They then modelled expected changes in income and expenditure in the years ahead. 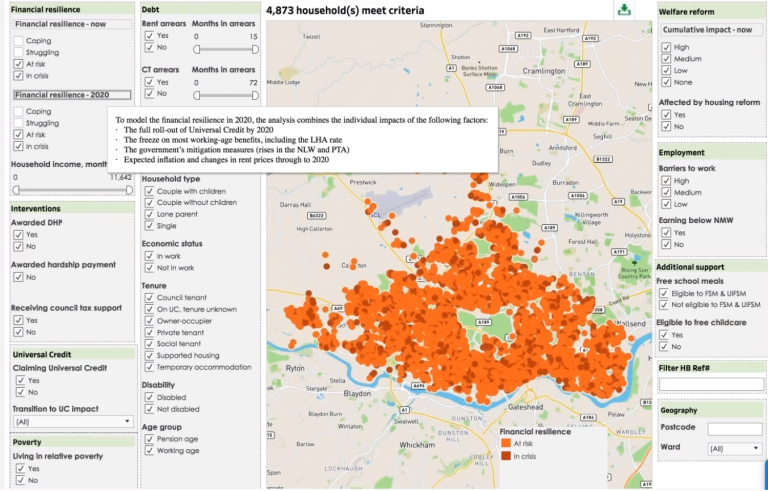 Financial resilience compares households’ actual income to average spending by low-income households (the bottom 30%), according to household composition and location. The gap between income and expenditure is calculated for each household, identifying those families that had an expected cash shortfall. Households are then categorised into three groups:

The project allows policymakers to ask a different set of questions:

See which London Boroughs are participating in this research here

To discuss this research in more detail or to join the next wave of analysis please contact Giovanni Tonutti, Senior Analyst, Policy in Practice at giovanni@policyinpractice.co.uk or 0330 088 9242.