How impactful will curbing access to benefits for EU citizens really be?

Access to benefits for people, particularly EU citizens, is one of the most topical subjects in British politics.

With the rise in net migration coming mainly from the EU (76% of all new non-British National Insurance Number registrations in 2015), some political parties have raised concerns about the legitimacy for EU migrants to access the welfare system.

What Cameron wants: no in-work benefits for newcomers

The Conservative party see their inability to limit entry into the UK for EU migrants, and their access to in work benefits, as undermining the sustainability of the welfare expenditure.

In the 2015 General Election manifesto the Tories proposed a break on access to in work benefits for EU citizens who have worked in the UK for less than 4 years.

Prime Minister David Cameron has brought the same proposal on the negotiating table with other EU member states and institutions.

“So we have proposed that people coming to Britain from the EU must live here and contribute for four years before they qualify for in-work benefits or social housing. And that we should end the practice of sending child benefit overseas.”

Interestingly, according to an FOI request by the Guardian, only 84,000 EU migrant families claiming tax credits have lived in the UK for four years or less.

Article 45 of Treaty on the Functioning of the European Union establishes the freedom of movement for workers within European Member states. 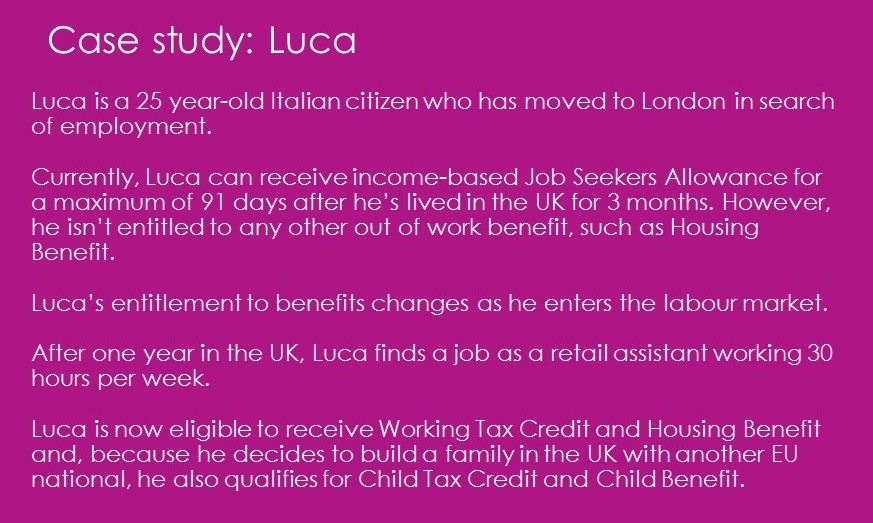 ates with regards to employment, remuneration and other conditions of work.

This has been interpreted in EU law as EU workers having the right for to access in work benefits in all member states.

Economically inactive (out of work) citizens are treated differently.

Member States may reject claims for social assistance where EU citizens from other member states do not enjoy a right of residence, or if they have relocated in the host country solely because of their job-search.

Each member states interpret and apply this regulation differently.

In the UK, for example, access to out of work benefits is limited for EU citizens, as our case study featuring Luca shows.

What the EU proposes

In response to David Cameron’s request, the EU has proposed a safeguard mechanism that would allow Britain to limit access to in work benefit to EU citizens for up to 4 years since their start of employment.

To take advantage of this mechanism, member states would have to seek approval from the EU commission and Council (either through qualified majority voting or unanimity) and present evidence of a situation of ’emergency’ as the result of excessive migration fluxes.

It’s unclear how this would be exercised, and it could not be exercised unilaterally by the UK.

If this proposal is approved by all member states and the European Parliament, it would allow the British government to establish a graded limit to access in-work benefits to EU citizens. It isn’t clear whether children in countries with a high cost of living (e.g. in Scandinavia) would get more child benefit than they would otherwise.

The implications of a ‘graduated brake’ on UK welfare expenditure

The main source of in-work benefit expenditure in Britain is working tax credit.

According to HMRC data, in 2014 2.45 millions claimants were in receipt of Working Tax Credit.

Around 5% of working tax credits recipient households had at least one non-UK EU citizen, more precisely 113,000 single EU citizens, and 97,000 couples with at least one EU individual.

Crudely, Policy in Practice estimates that if access to working tax credit was to be denied all together to EU citizens, the British government could save around £815m.

However, this number almost surely represents an overestimate because HMRC includes families with only one non-UK EU citizen in the group of EU claimants.

Yet families with any British citizens will likely by exempt from any type of restriction.

In addition, if the safeguard mechanism proposed by the EU was to be applied in Britain, the economic impact would be even smaller.

Studies on tax credit take up rates among Eastern European citizens suggests that the majority of EU claimants receiving working tax credits are unlikely to apply for the benefit as soon as they enter the British labour market.

When they arrive they are more likely to be single, working, and unlikely to qualify for in work support.

Typically, they start claiming after a few years, as they integrate in British society and build a family here.

Hence imposing a break on working tax credits access for the four years, would arguably capture only a marginal segment of EU citizens claiming in-work support.

The complexity of Universal Credit

The rollout of Universal Credit will add a further element of uncertainty not least because the new system will substitute both current out of and in work benefits, including working tax credits.

Once Universal Credit is rolled out it will become increasingly harder to distinguish between in work and out of entitlements, posing an obstacle to the potential effectiveness of a ‘brake on benefits’.

Policy in Practice’s analysis finds that government efforts to limit access to in-work benefits to EU citizens will have very marginal and uncertain effects.

In addition, it will add complexity to the benefit system while they are trying to simplify it, and while focusing on limiting in-work benefits for migrants, the government are also cutting in-work support for UK citizens, through planned cuts to Universal Credit.

It is also unclear whether a brake on benefits would have any significant impact on migration.

There is little evidence to suggest that the driver for migration into the UK is access to benefits.

Rather, employment prospects and wages appear to be the primary reasons pulling EU migrants to relocate in the UK.

Others have argued that increasing the living wage will only make the UK labour market even more attractive to people from outside of the UK.

The government’s efforts to negotiate on a brake on benefits for EU citizens fall short to tackle two of the core objective of its manifesto, tackling the deficit and curbing net migration.

One thing that the negotiations could succeed at, however, is portraying the Conservative government as having a tougher stand on migration than the opposition, something that polls well within the electorate.