As the cost of living crisis continues many pensioners face unprecedented financial challenges. With about a third of eligible pensioners missing out on unclaimed Pension Credit, the DWP is reminding people that this support is available.

DWP estimates that up to one million pensioner households may be eligible for £1.7billion of unclaimed Pension Credit and has launched a new campaign to boost take up.

The role of local authorities in a successful take-up campaign

Some leading local authorities have achieved great success with Pension Credit take up campaigns informed by their administrative data. Councils who use Policy in Practice’s LIFT platform have secured take-up for residents worth an average of £2,700 per household.

The involvement of local authorities is key for a number of reasons.

Data analysis as a key tool in benefit uptake

Working with councils across London and Kent, we have demonstrated the effectiveness of Pension Credit take-up campaigns at a local authority level.

The total value of Pension Credit take-up we have secured for clients across nine local authorities in the South East is currently £1,905,720.

In a similar campaign in Tower Hamlets, 415 households were identified and contacted, with 58 taking up Pension Credit, a success rate of 14%. While the success rate was lower,this was achieved without follow up calls being made. So even when the council had minimal resources to spare, they achieved take-up of 14%, with benefits to residents totalling £223k, or £3,845 per household.

The Revenue and Benefits team at Folkestone and Hythe District Council used LIFT to support their mixed-age pensioner campaign, identifying 98 potential claimants. Just 10 days after contacting these residents by phone, 51 had begun claiming Pension Credit, an uptake of 44%.

The average gain for each household is £2,700 per annum. Similar gains have been achieved at Gravesham Council where Pension Credit campaigns have led to over £232,500 in additional annual income for pension-aged residents within six months. 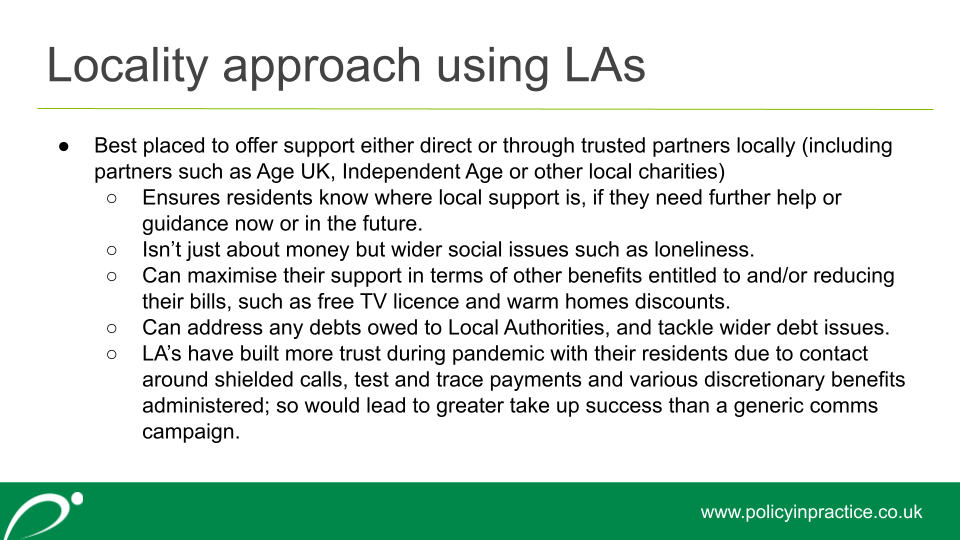 There are currently 20 other local authorities already successfully running, or planning to run, Pension Credit campaigns using their administrative data. These results are entirely replicable. Campaigns reach 500 households on average (varying according to the size of the authority), this would bring in £1.25 million on average.

Based on our analysis across thirty-three local authorities, we believe we can identify 250,000 pensioners missing out nationally. If one in three are supported to take-up Pension Credit, we could help 85,000 take-up the benefit within three months.

The impact nationally would be an additional £230 million in annual income to the worst off pensioner households, while the lifetime impact of the campaign would be £1.5 billion.

Learn more about the LIFT Dashboard

View a demo of the LIFT Dashboard 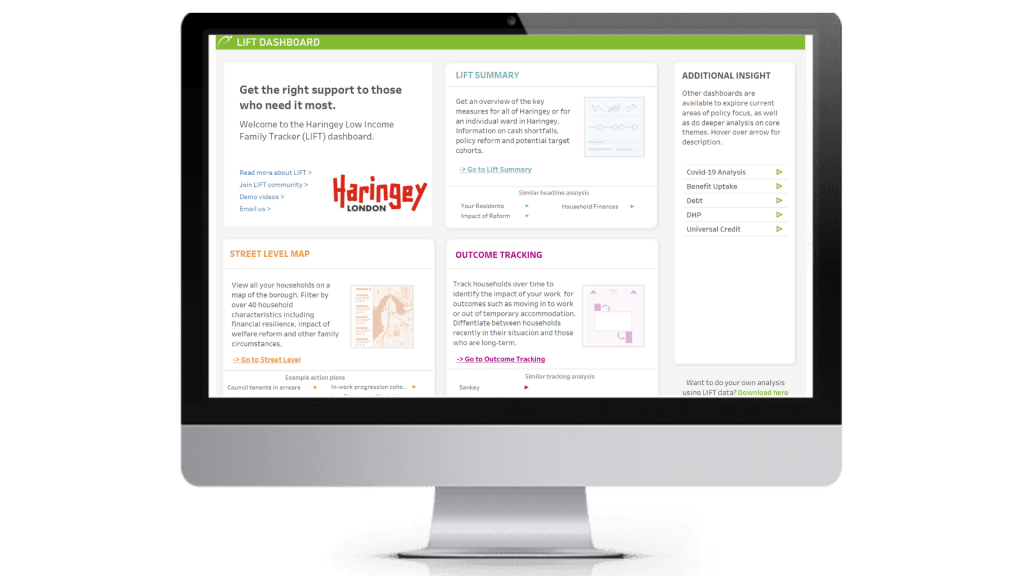