The Local Housing Allowance (LHA) is already affecting the majority of private tenants. When this cap on housing benefit comes in for social tenants, even more people will be topping up their housing benefit to cover their rent – or falling into rent arrears.

Our analysis is again based on anonymised household-level data, combined for three groups: London boroughs; big cities; and small cities and towns. This blog focuses on housing benefit (updated from our previous blog), particularly the under-occupation charge and Local Housing Allowance.

Tenants in social and private rented homes make up the largest groups in the datasets provided. Since the data comes mainly from people claiming housing benefit, with some owner-occupiers captured in council tax support data, this is expected. Looking at the spread below, the levels of households in these two tenures is pretty consistent: more than half are social tenants and a third private tenants.

In London boroughs, however, there is a more notable level of temporary accommodation, albeit just 2%. This reflects the higher housing costs and lack of suitable housing for homeless people in the capital, a point raised by local authority delegates at our recent breakfast briefing on the impact of welfare reforms on households in the South East. We will also be covering this area in more detail on our Webinar on November 2nd, you can register here. 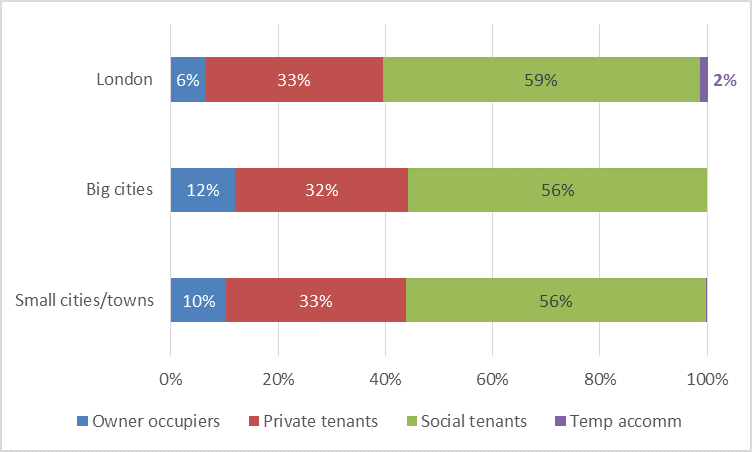 The under-occupancy charge is not freeing up homes

A most significant political reform of housing benefit has been the under-occupancy charge, also known as the bedroom tax or spare room subsidy, which was introduced in April 2013 and affects social tenants. Working-age households with more bedrooms than deemed necessary have their housing benefit cut.

There is a moderate negative correlation between the proportion of working-age people in work and social tenants affected by the under-occupancy charge. In areas where fewer people are in work, more are affected by the bedroom tax. This perhaps highlights older working-age tenants who are unable to work but still live in family sized homes.

Contrary to one of this policy’s aims – to encourage tenants to move out of larger properties – this shows that a significant share of social tenants are choosing to remain in larger homes and top up their rent themselves. The policy doesn’t seem to be freeing up family-size homes, as intended, but is reducing housing benefit costs. However, the pressure to build homes continues. 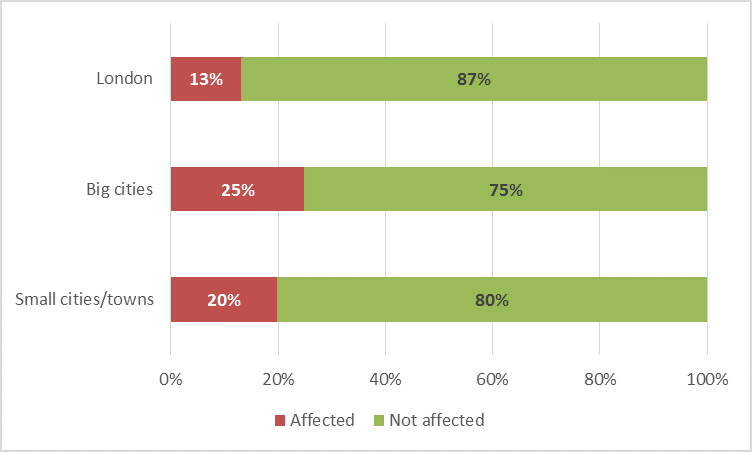 How private tenants are affected by the Local Housing Allowance

The Local Housing Allowance cap was introduced in 2008 and currently affects just private tenants. It limits housing benefit payments roughly to the value of the cheapest third of rents in the local area.

The lower benefit cap will bring further effects, as more households will have capped benefits altogether, therefore less income to pay for housing and other costs. The four-year freeze on LHA levels will also likely see more private tenants having to top up their rents, as most landlords continue to raise rent levels regardless.

We see strong correlations in the data for LHA caps. Where more private tenants are capped at LHA levels, fewer working-age households are in work and more are receiving Disability Living Allowance (DLA) or Employment and Support Allowance (ESA). This reinforces the view that workless and vulnerable households are increasingly living in private rented housing instead of social housing.

Private tenants with housing benefit capped by the LHA 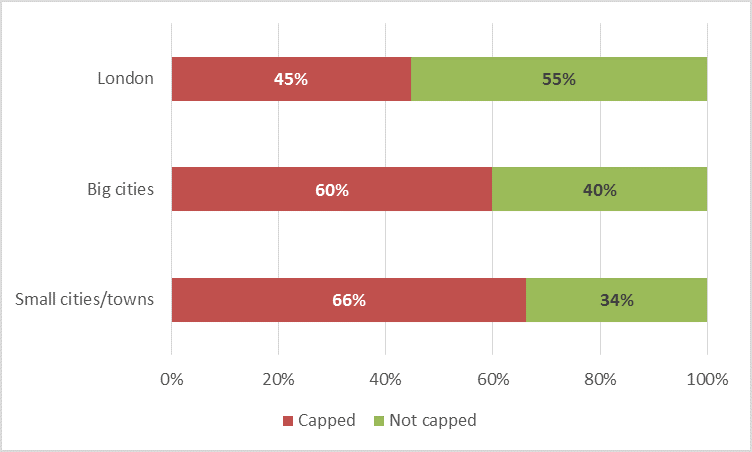 How social tenants are affected by the Local Housing Allowance

In November 2015 the government announced that the LHA cap will also apply to social tenants, for tenancies starting from April 2016 with the cap introduced from April 2018. This is a concern for social housing providers.

We’ve analysed the likely impact of the LHA cap if applied to tenancies today. The picture varies considerably across the country. The area with the highest share of social tenants to have their housing benefit limited to the LHA cap would see 38% of social tenants affected, while the lowest would see 1% affected. We can help you to understand how your local authority or housing association will be impacted, please contact us to learn more.

Two other reforms are making it tough for social housing providers. The 1% rent cut is leading to less income coming in, while the growing number of tenants on Universal Credit is leading to higher arrears, as claimants receive the housing element themselves rather than be paid direct to their landlords.

Together, all these welfare reforms are troubling social housing providers and leading to less income coming in. Many are having are facing the dilemma of cutting staff and reducing service levels while also trying to keep tenants happy. That’s a tough challenge.

Households are also affected by other reforms

We’ve focused on two particular reforms affecting social and private tenants but, of course, other measures affect them too. Policy in Practice can model the financial impact on tenants in the social and private rented sectors to understand how they are affected by individual and combined reforms. This is an essential first step to engaging and supporting them.

We’re particularly keen to work with more local authorities and housing associations jointly to model the impact of welfare reform. Working in partnership in this way also allows us to factor in other data, such as rent arrears.

If you are a council with retained housing stock, a council working closely with your housing ALMO colleagues, or a council with close ties with housing associations in your area we can help you to provide better support to your most vulnerable tenants.