It’s conference season, so that means it is time for the IRRV Annual Conference which runs from Tuesday 6 to Thursday 8 October 2020. It is the first time that the main event of the IRRV calendar is being held online, a considerable achievement in itself, and as ever Policy in Practice is very keen to contribute.

I am delighted that we have two speakers at the conference. Deven Ghelani is speaking in Tuesday’s plenary sessions about new approaches to debt collection. And on Wednesday Zoe Charlesworth, Director of Policy and Operations, is speaking about the strengths and weaknesses of the overall support for low-income households during the current pandemic, and who has fallen between the gaps.

Many of you will have seen a recent webinar from IRRV featuring chief executive, David Magor, and senior vice-president, Alistair Townsend, discussing council tax collection after COVID. I thought this was a typically thoughtful and informative piece, raising some very interesting points that set me thinking about the future. 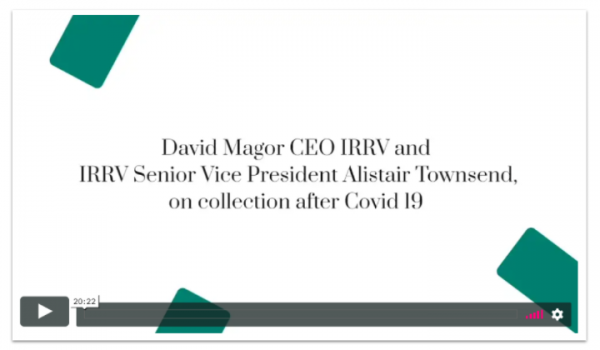 It is clear that local authorities are at the frontline in dealing with the impacts of the pandemic. They have the main responsibility for supporting vulnerable people but at the same time face major financial pressures because of loss of income. Council tax collection rates are likely to suffer this year as more people struggle to pay their bills. According to Citizens Advice an estimated 2 million people had missed a council tax payment by May as a result of Coronavirus.

But listening to the IRRV webinar confirms my view that there is definitely cause for optimism. This is for three reasons:

In his discussion with David, Alistair says that the pressure to deliver has been the greatest they’ve ever experienced. He goes on: I have to say it’s a great testament to the flexibility and agility of our members to have been able to deliver such urgent measures so well. I fully endorse that view. Whilst there are certainly gaps in the emergency measures that have been introduced by the government, their implementation has gone remarkably well in the circumstances.

DWP has done an admirable job dealing with the massive increase in Universal Credit claims. The new benefit has shown the sort of flexibility and resilience that would not have been possible under the legacy system. We recently submitted evidence to the Work and Pensions Committee about the DWP response to the pandemic. We welcomed the pace of implementation, set out where we thought the gaps in provision are and recommended reforms to the benefit system, such as suspending the savings limit and ending the benefit cap. You can read a more detailed account of our evidence here.

Local government has been equally impressive in dealing with the unprecedented influx of council tax reduction applications. Not only that, local authorities have had to deal with a range of other measures including the hardship fund for households receiving council tax reduction and, more recently, the new grants for those low-income households who are self-isolating.

The achievements of both central and local government are all the more impressive because they have involved a major redeployment of staff at a time when it has been necessary to cope with sudden shifts in working practices such as more homeworking.

There is no doubt that public servants can and do rise to the occasion in the face of a crisis and undoubtedly this will be evident in dealing with the challenges of council tax collection.

In their discussion, David and Alistair mention the pilot debt collection project being co-ordinated by the Cabinet Office. We were involved in the ‘Reimagine Debt’ pilot and Deven is talking about the outcomes on the first day of the conference. In short, the pilot showed the benefits of taking a proactive, preventative and holistic approach to collection, and how this approach could be scaled through an intelligent approach to data analytics.

Policy in Practice helped two councils, Newcastle City Council and the London Borough of Barking and Dagenham, monitor the impact of the pilots. The two councils took slightly different approaches.

The various forms of support offered to the households were tracked using the Policy in Practice Low Income Family Tracker Platform.

Here are some of the outcomes for the households tracked in Newcastle:

The cost of the pilot in Newcastle was modest at nearly £7,000 but the monetary benefits were estimated to be over £168,000, a return on investment of 24-fold. 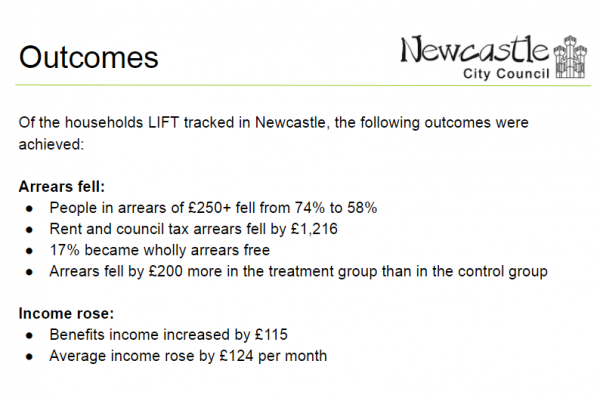 The pilot in London Borough of Barking and Dagenham showed similar outcomes:

David and Alistair favour a holistic approach. As Alistair says: I don’t think that the future will be how quickly we can get them through the statutory recovery process, it will be about how many we can engage in a holistic way that allows us to deal end-to-end with all their problems. The aim will be to create a sustainable arrangement that allows them to resolve all their issues in one go.

David and Alistair pick up the point about those councils who made cuts in their council tax support provision, and ask whether local authorities really properly considered the impact on their customers when they make decisions to cut provision.

MHCLG recognised the importance of council tax reduction schemes in protecting vulnerable people when they distributed a £500 million Hardship Fund and recommended that local authorities use it to plug the gaps in council tax reduction schemes. Our analysis of the Hardship Fund shows that this needs to go further. We agree with Alistair that for many on very low incomes the fund doesn’t eliminate the need to pay some council tax.

It is vital that any local council tax reduction scheme complements council tax collection policy. A more generous scheme may in the long-run prove cost-effective overall.

David and Alistair conclude their webinar by reflecting on the future. As well as keeping an eye on day-to-day operational needs, they recognise the need to look at the strategic long-term aims of how we’re going to recover the situation. Very wise advice. Strategic planning should involve putting the customer first, targeting resources informed by detailed analysis, and ensuring that council tax support and council tax collection policies are considered together.

Policy in Practice believes that the best strategic planning involves putting the customer first, targeting resources informed by detailed analysis, and ensuring that council tax support and council tax collection policies are considered together. Councils can learn from the work of both Newcastle City Council and London Borough of Barking and Dagenham and the holistic approaches they took, as outlined in ReImagine Debt project, as well as Enfield Council’s approach to the design of their council tax support scheme and how that can positively impact on collection rates.

All our webinars are free and start at 10.30 for an hour and 15 mins. If you can’t make the date please register anyway to automatically receive the slides and recording.  Contact hello@policyinpractice.co.uk with any questions.