We recently hosted over 500 delegates on our webinar, ‘How Autumn’s Income Shocks Will Hit Low-Income Households’. A record-breaking level of interest shows the extent of concern across organisations, ranging from councils to those in the third-sector, as they prepare for a challenging series of months for their residents and customers. (View the webinar on-demand here if you missed it.)

Joined by our guest speaker Monica Kaur (Money and Pensions Service, MaPS), the webinar brought together findings from our groundbreaking project with Trust for London, insights from recent analysis and our knowledge of the economy and welfare policy. The pressures faced by thousands of families were at the forefront of our discussions as the Government commits to removing the support that has kept many out of poverty throughout the pandemic so far.

A trio of challenges for low-income families

The end of the temporary £20/week uplift to Universal Credit started to affect households at a similar time to the end of furlough and its counterpart for the self-employed. Our analysis for the All Parliamentary Group on Poverty in January this year showed that an estimated 225,000 additional households (with 229,000 children) would be unable to meet essential costs such as housing, groceries and utilities, leaving a total of 683,000 households with 824,000 children in a cash shortfall. 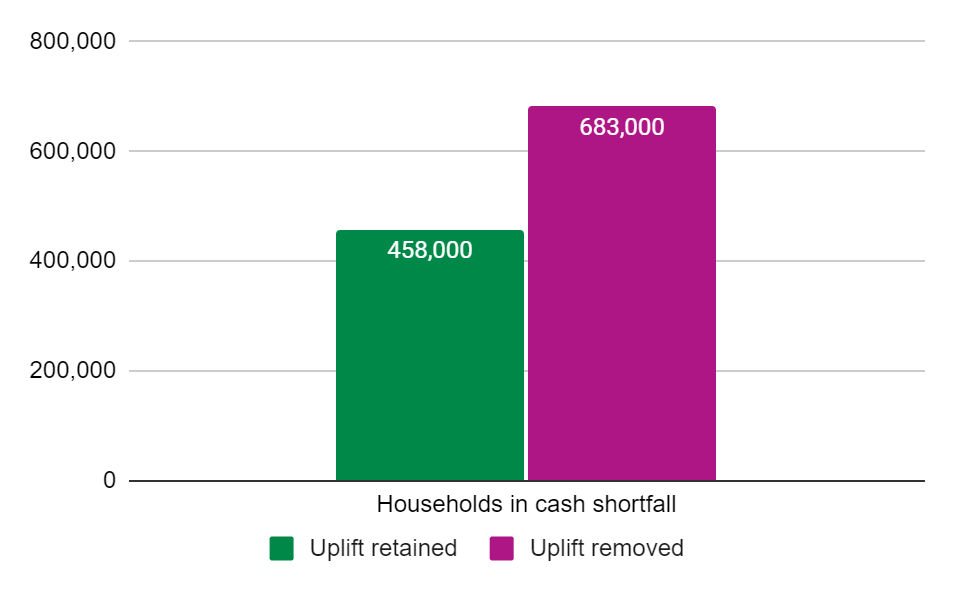 In contrast to the planned changes to temporary benefit measures and furlough, widespread increases to the cost of living were unexpected. However, for many families and front-line advisors, increased costs come as little surprise, a perception backed by recent research by the Resolution Foundation and the Nuffield Foundation.

The 12% increase to the energy price cap is of particular concern. The cap protects 11 million families paying for their gas and electricity under a default tariff, (also known as a variable tariff), and a further 4 million using pre-payment meters. Combined with wider supply-side uncertainty, it could also impact those on fixed-rate tariffs, as these come to an end and fewer equivalent alternatives are available. There is also higher demand as more middle-income households see the need to switch. The cap is expected to increase again on its next review in April 2022.

The backdrop to rising costs and falling incomes has been the experience around debt and savings that has affected many families on a low income. Evidence shows that, for those on the lowest incomes, savings have dropped while debt has increased.

Effects of the removal of temporary support measures

A big factor behind the shock to incomes is the end of the £20/week uplift to the Universal Credit work allowance. This affects all Universal Credit claimants introduced in September, and starting to bite from the 6th of October. The removal of the uplift coincides with the end of two income replacement measures on 30 September, the Coronavirus Job Retention Scheme, and the fifth Self-employment Income Support Scheme grant.

The end of furlough is expected to result in an increase to the number of people out-of-work, as planned redundancies and company restructures take place.

Furthermore, many existing benefit claimants will be affected by:

This is an assumed level of earnings used to determine the amount of Universal Credit for self-employed claimants. The MIF was reintroduced from 1 August, catching those that fall outside the initial 12 month ‘set-up period’ and are in the all work-related requirements group (noting that it is possible for the set-up period to be extended for those that were in a setup period between 14 March 2020 and 31 July 2021).

This is set to increase as more people experience a change in circumstances and previous flexibility preventing a move to Universal Credit is removed. Aligned to the date of furlough closing, Tax Credit claimants will need to report any temporary reductions to hours if these have continued beyond 25 November.

This will have protected non-exempt benefit claimants for a period of nine months, provided they were previously employed and working a minimum number of hours. As a result of the grace period not being extended to reflect the ongoing disruption of the pandemic, the benefit cap will start to hit those facing longer-term spells of unemployment. Because furlough is considered employment, those that leave the scheme and claim Universal Credit will be protected by the 9 month grace period (provided they meet the other criteria).

The £20/week increase to Tax Credits and the Housing Benefit earnings disregard (replaced in April 2021 with a £500 lump sum payment) excluded out-of-work claimants in receipt of legacy benefits.

This applies to the majority of people with low earnings and limited savings. (The exact level depends on circumstances. For Universal Credit, savings need to be below £16,000; this is usually the same for Council Tax Support but varies across local authorities). It’s important to highlight that while redundancy pay is treated as savings for Universal Credit purposes, the SEISS grant is treated as earnings and could trigger the surplus earnings rule.

This is available to most jobseekers, including those that work less than 16 hours per week, provided they have made sufficient Class 1 National Insurance contributions or received sufficient credits in the two years preceding the claim. (This can be checked here). JSA payments don’t depend on earnings or savings but claimants are expected to look for work; those that have an illness or disability that stops them from working should instead apply for ‘new-style’ Employment and Support Allowance.

A large number of people becoming unemployed over the coming months will be eligible for means-tested benefits, JSA/ESA, or both, but others (particularly students and many people with ‘no recourse to public funds’) will need to rely on savings, access to credit (such as loans), or discretionary support and grants to tide them over this difficult period.

Results from our poll showed a clear line of concern. Almost two-thirds of respondents expected the end of the uplift to have the most negative impact on customers. This is unsurprising given the wide-ranging impact of the measure. By removing the uplift, incomes will be directly affected, limiting the extent to which higher costs can be absorbed, while compounding other measures. Families forced to migrate to Universal Credit from legacy benefits could be worse off by a larger amount and those affected by the Minimum Income Floor will face a double whammy of assumed earnings and de-facto lower support. Our recent analysis showed that 47% of self-employed on UC and 29% of those affected by the two-child limit risked being in cash shortfall due to removing the uplift. 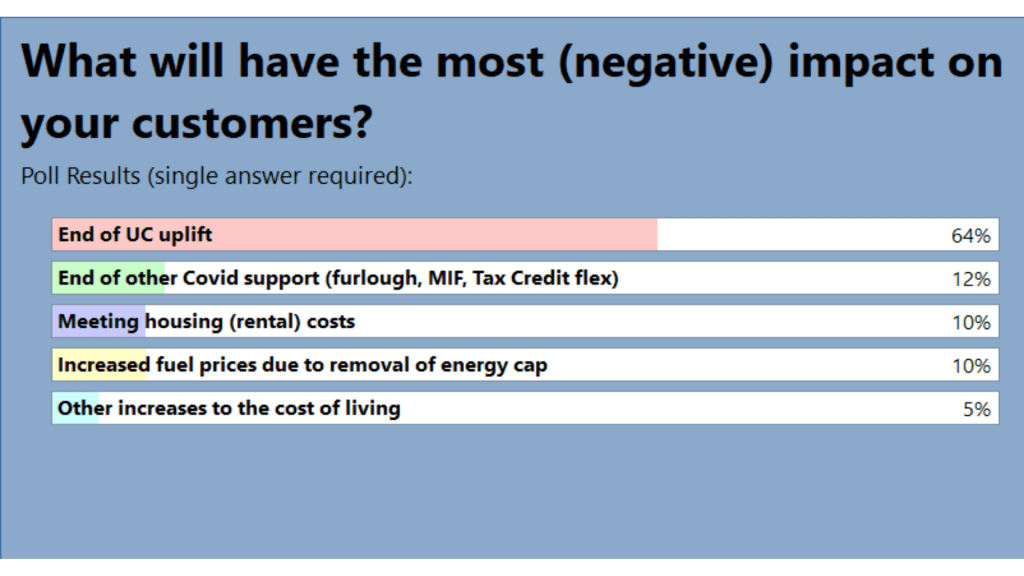 For the many families facing new or mounting levels of debt, this will result in substantial pressure, with respondents anticipating rent and mortgage arrears to have the biggest impact. This is again unsurprising. Section 21 (‘no fault’) evictions have now returned to a 2-month notice period, the ban on evictions ended in May and the standard Breathing Space period lasts a maximum of 60 days.

The complexity of challenges and scant centralised support puts ever-greater emphasis on local authorities and advice organisations to help low-income families navigate the welfare system. More than an estimated £15bn benefits go unclaimed each year. Universal Claimants cited the risk of overpayments/debt or lack of awareness as a key reason for not claiming Council Tax Support. In addition, we know from debt charities that many people drowning in debt are too anxious to seek help when they first fall into trouble, which can lead to a vicious cycle of debt.

We’ve also heard anecdotal evidence that many struggling families are not aware of Discretionary Housing Payments, discounts such as reduced wifi tariffs and the Warm Homes Discount, in-kind transfers/vouchers such as Free School Meals* and Healthy Start vouchers. There’s much to be said for the value of a conversation with an expert with knowledge of the welfare system and the ability to signpost customers effectively.

Targeted support will be paramount for the recovery. The Government recently announced £500 million of funding to councils in England and devolved administrations via the Household Support Fund. Although welcome, this level of funding pales in comparison to the £2.2 billion of support that was made available by the Universal Credit uplift. (The value of CJRS and SEISS over was £6.9bn and £12.8 billion, respectively. Source: OBR EFO, p190.)

This in turn puts severe pressure on councils to target support to those most in need and engage in creative ways to maximise the incomes of their residents. Advice organisations will also play an important role by supporting current and prospective claimants as they navigate the welfare system.

Policy in Practice and MaPS have a range of tools available to support with this effort:

This is combined with our micro-simulation of the benefits system and policy knowledge to provide insight and help you target support at the household level.

3. MaPS tools
MapS provides free financial guidance with the overarching aim of ensuring a minimum level of financial wellbeing for everybody. Tools include the redundancy pay calculator and mortgage calculators. Check out the UK Financial Wellbeing Strategy and how you can embed in your organisation.

Previous Post
Building a path out of in-work poverty

Building a path out of in-work poverty 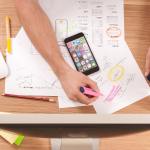 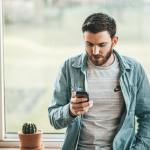 Our Benefit and Budgeting Calculator gets a new design 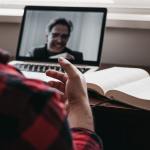 Benefit and Budgeting Calculator steering group: our clients respond to the pandemic

A new approach to the collection of council tax in London 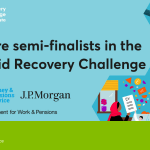 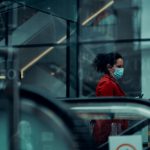 How to find the right debt solution for everyone 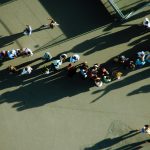