Brexit: What’s next for ESF and local authorities? 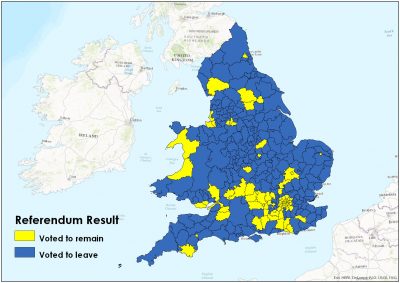 One of the many potential impacts that a UK exit from the EU could have is increased pressure on local authorities if, or when, European Social Funds (ESF) to the UK are terminated.

The Referendum Result map opposite shows how different areas of England and Wales voted.

In this blog post we analyse which local authorities are most at risk from ESF cuts and who, in order to maintain current levels of investment into employment, will have to identify alternative sources of funding.

We also look at a programme funded by ESF and give a clear view of the type of replacement investment that would be required.

How much does the UK contribute to the EU? And what does it get back?

One of the hotly debated topics of the referendum campaign was the net economic contribution made by the UK to the EU.

The EU budget, which is calculated in 7 year tranches, is made up of contributions from all 28 member states.

For the last funding period (2007-2013), the UK contributed €77.7 billion to the EU buget, a figure that includes a rebate negotiated by Margaret Thatcher, while €47.5 billion was invested back in a range of measures.

In the UK, these re-investments largely take the form of European Structural and Investment Funds (ESIF), the Horizon 2020 research fund plus a range of more specific programmes such as Erasmus+.

Here, we focus on ESIF, which is made up of the following 5 components:

Specifically, we look at European Social Funds, which were set up under the Treaty of Rome to improve workers’ mobility and employment opportunities in the common market. Today, the ESF objectives can be broadly defined as to:

How are ESF funds currently distributed within the UK? 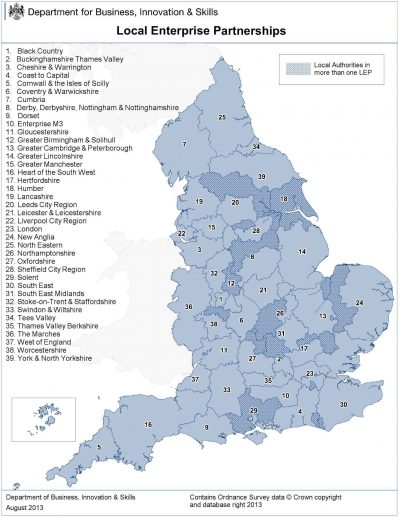 Within the UK, ESF funds are allocated to Local Enterprise Partnerships (LEPs), geographical sub-divisions which often group together and  /or split traditional local authorities, as shown in the map below.

Successful applications to access the latest tranches of funds came from all 39 existing LEPs across England & Wales. However, following the vote to leave, a significant level of doubt has now been cast on the future availability of this investment.

Based on ESF legislation, the force majeure in the UK exiting the EU would allow ESF to be ‘decommitted’. In other words, for the purposes of this analysis, Policy in Practice assumes that ESF could be cut off mid-tranche and not be maintained through to 2020.

Of course, the ultimate impact of reduced ESF funding depends upon the priorities of the government, the extent to which it focuses investment on social programmes, and the impact of Brexit on the economy overall.

Political negotiations not-with-standing, for policy makers in Britain business will certainly not be as usual. Support to low income areas / households previously channelled via ESF is now at risk of being terminated, and alternative ways of funding may have to be secured by the local authorities most heavily impacted.

To compound the funding risks further, several local authorities in England and Wales are also in receipt of European Regional Development funds – money allocated to the poorest regions in the EU as an effort to achieve a European ‘convergence’.

Which local authorities in England and Wales are most at risk if ESF is terminated?

As shown in the map below, the geographical impact is very varied, with a notable distinction between the West of England/Wales and the East of England.

It is important to note two things. Firstly, ESF does not constitute direct transfers (as is the case with Agriculture subsidies which are paid straight to farmers), so the potential monetary loss per capita only serves as an indication of how people in each local authority will be affected. ESF invests in projects which in turn help people into work, training, skills etc. The value of this is particularly hard to capture. 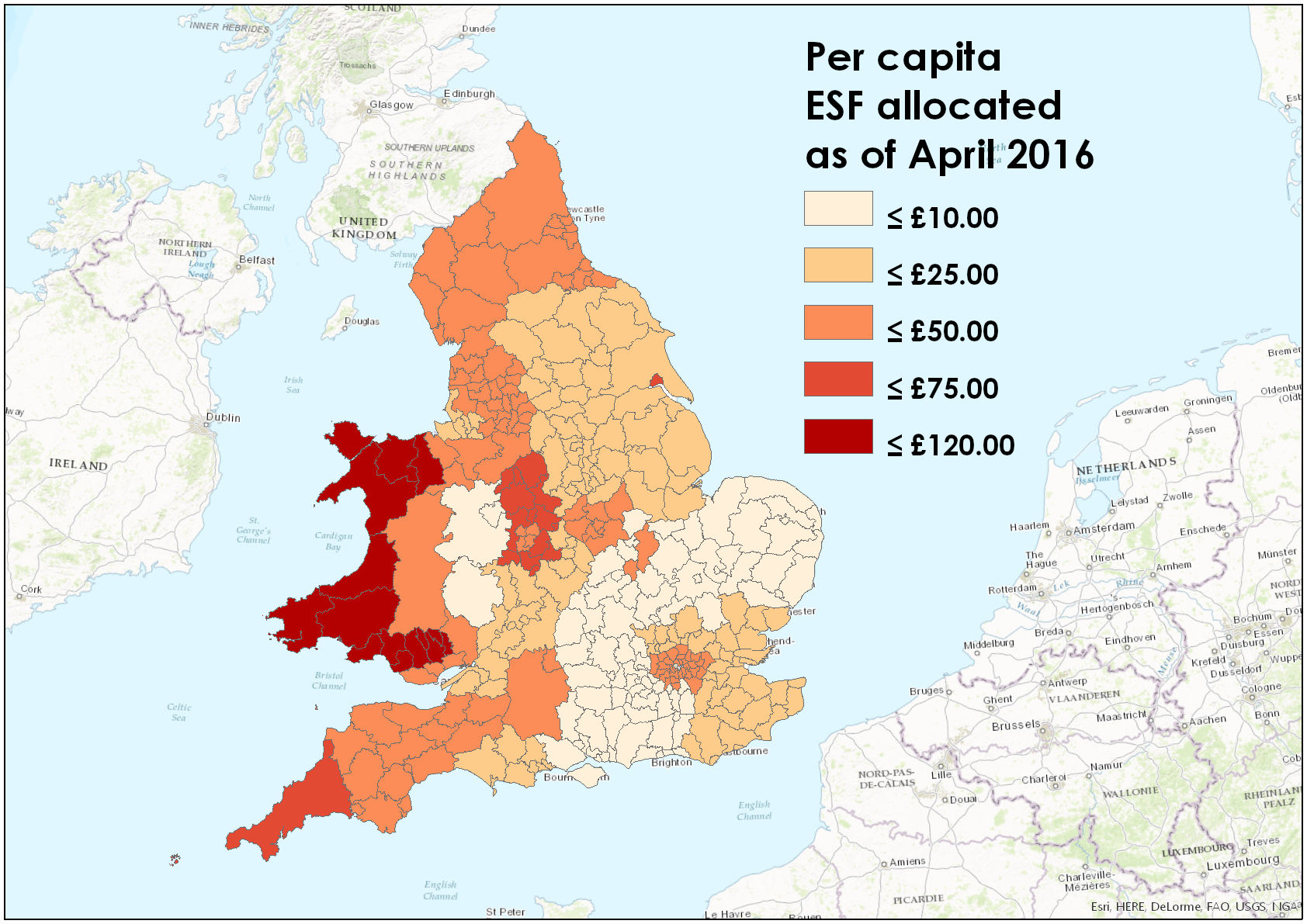 The main trends are as follows:

One stark conclusion from our analysis is that the potential loss in ESF funding equates to more per annum than has currently been allocated for the Work and Health programme, the planned successor to the Work Programme, administered by DWP.

What types of projects are at stake from ESF cuts?

In the North East, health issues have been identified as a significant barrier to work for many people. The Building Better Opportunities Project funds schemes that tackle this, such as one called ‘Fitness First’. This scheme runs a 12-week physical activity and well-being programme for homeless people in partnership with Northumbria University. The aim is to improve participants’ physical and mental health so that they are in better shape to find employment. They received £9,400.

Another example of a funded scheme is ‘Reaching the Streets’ in Newcastle Upon Tyne, which helps people, mainly aged between 16 and 35, who are affected by homelessness, alcohol and substance abuse, and mental and physical health issues. The scheme offers support on a one to one basis, and improves lives with psychotherapeutic interventions, peer support, recovery support, volunteering and mentoring. As this scheme takes place at such a personal level, the chances of success for people taking part is much greater. Tailored help can be given to each individual.

Ultimately, the referendum result has cast into doubt the European funding that LEPs (and in turn, local authorities) currently receive to improve employment opportunities, equip the workforce with skills needed by businesses and tackle the root causes of poverty.

Policy in Practice advocates that a future government should prioritise properly funded, effective interventions, like the Fitness First scheme mentioned above. This will lend continuity to efforts that tackle the root causes of poverty, and show that the government is ready to support people that are hardest hit, and most in need.

Use the search box in the table below to see how your local authority is likely to be impacted, by the total amount of ESF funding potentially at risk from the 2014 – 2020 tranche.

We blog about policy analysis and making the welfare system simple for people to understand. Sign up to automatically receive our posts via email (see sidebar box on this page).