Benefit sanctions set to increase dramatically and unevenly across the UK

With the recovery from the pandemic, benefit sanctions are set to increase dramatically and unevenly. Mary-Alice Doyle looks at why, even without the new policy requiring people on Universal Credit to take a job after just four weeks, we’re now seeing a big increase in the number of people faced with sanctions. Administrative data can help local authorities to keep track of how many of their households are affected by a benefit sanction in real-time.

Earlier this year the government announced new rules for people claiming Universal Credit. As of early February 2022 claimants can now be sanctioned if, after four weeks of claiming benefits, they do not search for and accept a job outside of their chosen field. This formed part of a campaign to increase employment by 500,000 by the end of June 2022.

The policy has received substantial criticism, most recently from the House of Lords Secondary Legislation Scrutiny Committee.

In a previous blog post we looked at the policy’s impact on tax revenue and the cost to the benefit system.

Now we ask two more practical questions. Just how much bite will these stricter sanctions have and, secondly, how can local authorities use their administrative data to help people for whom a sanction would place them at risk of financial crisis?

The short answer is that these new rules will affect only a small share of Universal Credit claimants. But at the same time we are seeing a dramatic but geographically uneven rise in sanctions under already existing rules. Local authorities can use their own data to track these issues in real-time and offer targeted support where needed.

Most benefit claimants are not expected to search for work

It’s important to remember that most people claiming Universal Credit and other benefits are not expected to search for work. We can look at the exact numbers using DWP’s StatXplore platform, which has data on benefit claimants broken down by their conditionality regime.

As you can see from the graph below, the number of people in the work search group peaked about a year ago. Since then we have seen a dramatic drop. In the six months to November 2021 the number of claimants in the work search group fell by half a million. If the same trend continues in the first half of 2022 it is likely that the government will have achieved its goal of increasing jobs by 500,000 even without stricter sanctions. 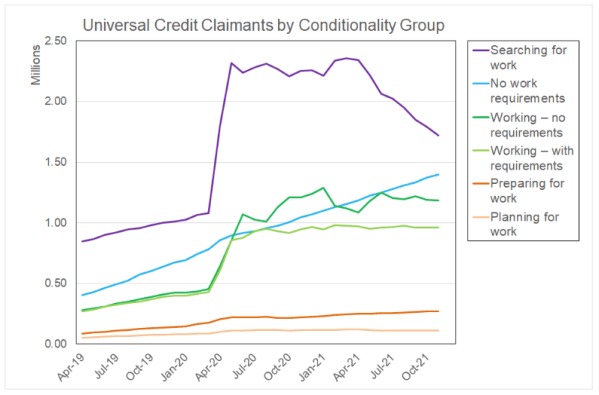 So within the work search group how many claimants will be affected by the new requirement to broaden their job search within four weeks of beginning their claim?

Under existing rules, these sanctions already apply to claimants in the work search group who have been claiming Universal Credit for three months or more. That means that these new rules will only affect people who have been claiming Universal Credit for between one and three months. Currently, of the 1.7 million claimants who are expected to search for work, only one in ten have started their claim within the past 3 months. This equates to around 170,000 people.

And how high is the risk of being sanctioned for those 170,000 people? The latest data (from November 2021) show that about 3% of work search group claimants are sanctioned. This has increased dramatically in recent months, up from around 0.2% throughout most of the pandemic period. 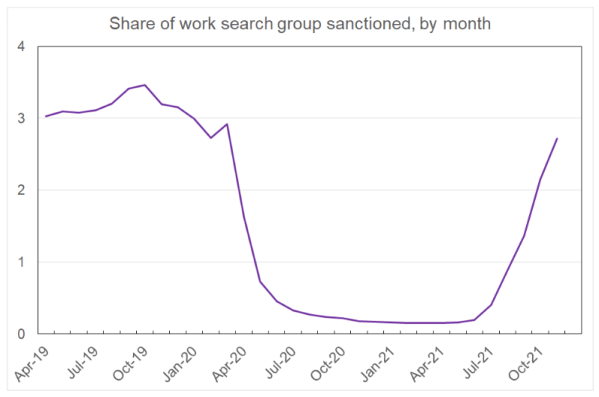 Putting all of this together, we know that:

So we are looking at what will probably be a very small change in sanctions because of this new rule. But at the same time we are seeing, and expect to continue to see, a dramatic increase in sanctions (based on existing rules) as the effects of the pandemic subside.

A 2018 Work and Pensions Committee report highlighted the issue of poor and uneven implementation of sanctions, leading to many inappropriate sanctions and causing those on the receiving end unreasonable hardship and stress.

This uneven implementation is reflected in substantial geographical disparity in sanction rates. At any point in time some local authorities have no residents facing a sanction while others have hundreds.

With the increase in sanctions we are currently seeing, some local authorities will be hit harder than others. There is not a lot of evidence available on the impact of sanctions but the evidence that does exist suggests sanctions can increase claimants’ risk of falling into problem debt, poverty, and mental illness.

Local authorities and service providers in areas with higher sanction rates may therefore wish to monitor sanctions particularly closely, especially given current pressures on the cost of living, meaning it will be even harder to get by on the full Universal Credit rate, let alone a portion of it.

The maps below look at sanction rates among people in the work search group, by local authority. We can see that there are significant differences in sanction rates across the country. While sanctions have been low since the beginning of the pandemic (shown on the map on the left), they are now returning to pre-pandemic rates (shown on the map on the right), when some local authorities had up to 8% of claimants sanctioned within a month. 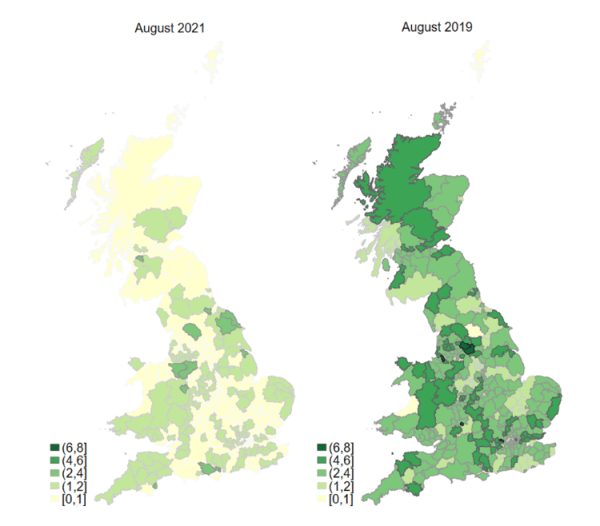 Unfortunately this aggregate data from DWP StatXplore comes out at a long lag. At the time of writing the latest data available on sanctions is from four months ago. This data may be useful for researchers but not for practitioners looking to prevent financial crisis. By the time they see the data it’s too late. But, with the right tools, local authorities can use their own data to track sanctions and associated financial risks in real-time.

What local authority’s administrative data can tell us

Many leading local authorities wish to provide targeted support to households, whether specifically to households experiencing a sanction or to those at risk of financial crisis for another reason.

Policy in Practice’s Low Income Family Tracker platform helps with this goal. Local authorities can use it to identify which of their low-income households do not have enough income to meet their needs and target support directly to them. This may be through helping those households to claim benefits they are already eligible for, or by providing discretionary support. They can also track change over time to determine the effectiveness of interventions.

Local authorities who have the platform can use it to easily identify households affected by both fuel and water poverty, for example. 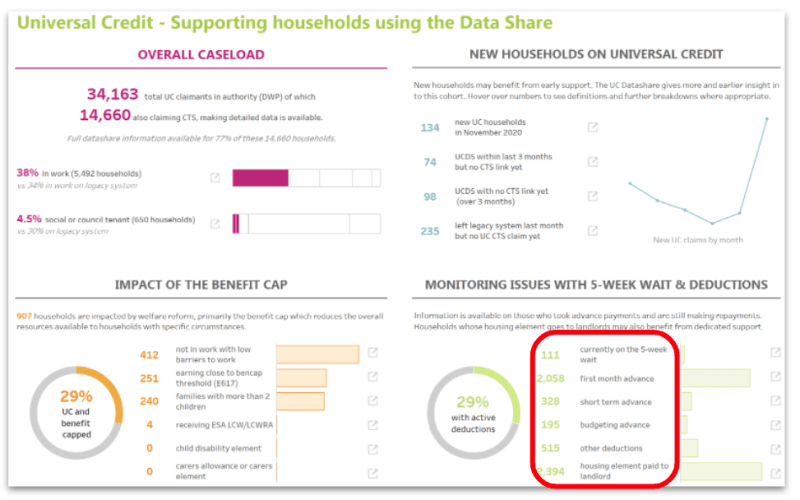 LIFT lets councils monitor issues that households on UC may be having due to the 5 week wait and deductions, via the UC Data Share

Local authorities also have a rich source of information in the Universal Credit Data Share files that are provided by DWP. We are currently exploring how this dataset can help local authorities to keep track of which households are affected by a sanction in real-time as shown in the screen capture from LIFT, above. We welcome approaches from more local authorities interested in developing these measures.

Existing benefit sanctions have a bigger impact than new ones

So how much bite do the new sanction rules have? The answer is, not much. Only a very small share of people on Universal Credit will be at risk of these new sanctions. The bigger story is that sanctions are increasing under existing rules, and will continue to increase, as we return to pre-pandemic conditions for claimants who are required to search for work.

We know that in the past sanctions have been inconsistently and unequally applied, with some local authorities having nobody facing a sanction, and some having hundreds at any point in time. We also know that sanctions can have serious implications for those affected by them. Local authorities can use data they already have to keep track of what’s going on in real-time, and offer targeted support where needed to households at risk.

If you are a leading local authority that wants to accurately explore the impact of benefit sanctions on your low-income families contact us at hello@policyinpractice.co.uk. We can help you analyse the implications of sanctions in your local area and show what you can do to lessen their damaging impact on your residents.